Democratic presidential candidate says embassy 'should not have been moved', but now that it's done, he would not move it back Joe Biden gestures during a speech in Tel Aviv on 11 March, 2010 (AFP/File photo)
By
MEE staff

Joe Biden says he will keep the US embassy in Israel in Jerusalem if elected president, despite calling Donald Trump's controversial decision to move the office from Tel Aviv "short-sighted and frivolous."

"It should not have been moved," the former vice president said on Wednesday during a virtual fundraiser with his supporters in Boston, Massachusetts. "But now that it's done, I would not move the embassy back to Tel Aviv." 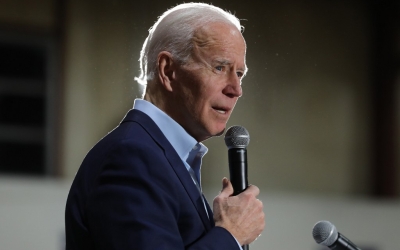 Biden's remarks were among the most detailed explanations of the issue he has given during the 2020 campaign.

"Moving the embassy when we did without the conditions having been met was short-sighted and frivolous," he said.

"The move shouldn't have happened in the context as it did, it should happen in the context of a larger deal to help us achieve important concessions for peace in the process."

In 1995, while a Delaware Senator, Biden voted for the Jerusalem Embassy Act which authorised moving the US embassy from Tel Aviv to Jerusalem.

But a succession of presidents from both major parties delayed the shift, setting conditions as part of ongoing peace negotiations.

The presumptive Democratic presidential nominee also said he would reopen the US consulate in occupied East Jerusalem "to engage the Palestinians".

Since coming into office, Trump has abandoned longstanding tenets of US diplomacy and fulfilled a wish-list of Israeli demands.

The US has recognised Jerusalem as the capital of Israel, claiming that the contested holy city is now off the negotiations table.

The White House has also appointed a hard-line pro-settler lawyer as ambassador to Israel, cut funding to the UN agency for Palestinian refugees (UNRWA), pulled the US from the UN Human Rights Council and declared that settlements are not necessarily illegal.

Earlier this year, Trump unveiled his so-called "deal of the century" which would see Israel take around a third of the West Bank in exchange for recognising a disjointed Palestinian state with no control over its borders or airspace.

On Tuesday, the State Department said it was prepared to recognise Israel's annexation of much of the occupied West Bank, despite condemnation from the Palestinians.

The European Union and several European states, including the United Kingdom, Germany and France, warned Israel against the move. While the UN's special Middle East envoy said that such steps would be a "devastating blow" to an internationally backed two-state solution.

Biden's foreign policy adviser, Tony Blinken, said the former vice president had been "on the record several times" saying that "unilateral steps taken by either side that make the prospect of a negotiated two-state outcome less likely is something he opposes, and that includes annexation."