Jordan has agreed to a one-off aid delivery to more than 100,000 desperate Syrians blocked in the desert no-man's land on its northeastern border, the United Nations said.

Jordan closed the border to both displaced Syrians and aid agencies after a 21 June suicide bombing claimed by the Islamic State (IS) militant group killed seven soldiers near the makeshift desert camp, Rukban.

News of the delivery comes after air strikes on Wednesday killed at least three Syrian refugees in a settlement also located along the Jordan-Syria border, but around 100km away from Rukban. Rebels in the area told Middle East Eye that they believed the strikes were Russian.

Last month, Middle East Eye first revealed footage, uploaded to YouTube by a Free Syrian Army affiliate operating in the area, showing scenes of everyday life in the camp where tents blend into the desert as far as the eye can see.

Jordanian authorities will distribute packages including food and other items to the displaced Syrians at Rukban, said the UN's World Food Programme executive director, Ertharin Cousin, who said her agency had negotiated with the government for the intervention.

"But the Jordanian government has been very clear with us it is a one-time intervention," she said on Tuesday.

Cousin said the details of the aid delivery were still being worked out with the UN Children's Fund and the International Organization for Migration and she could give no firm date for it.

On Tuesday, armed forces chief General Meshaal Mohamed al-Zaban reiterated at a meeting attended by the WFP director that the border would remain closed, the official Petra news agency reported.

Zaban said Jordan would "allow nobody" to cross, because the kingdom's security was an "absolute priority".

Jordanian officials have charged that the vast Rukban camp has become a hotbed of militant activity.

Cousin said she had flown over the camp by helicopter early on Tuesday.

"You are looking out of the window and it is just all desert and the sun rising and suddenly thousands of tents," she said.

"The numbers have been estimated by our teams on the ground as high as 100,000-plus at the border on the berm."

Aid agencies have voiced concern about the plight of the camp's residents who had been dependent on food and water deliveries across the border before its closure. 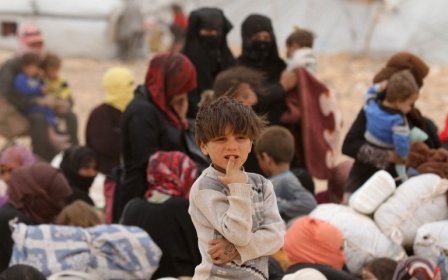