Ahead of Kuwait elections, women push for further representation

Fifteen years since women gained the right to vote, a new initiative vows to increase the number of women MPs 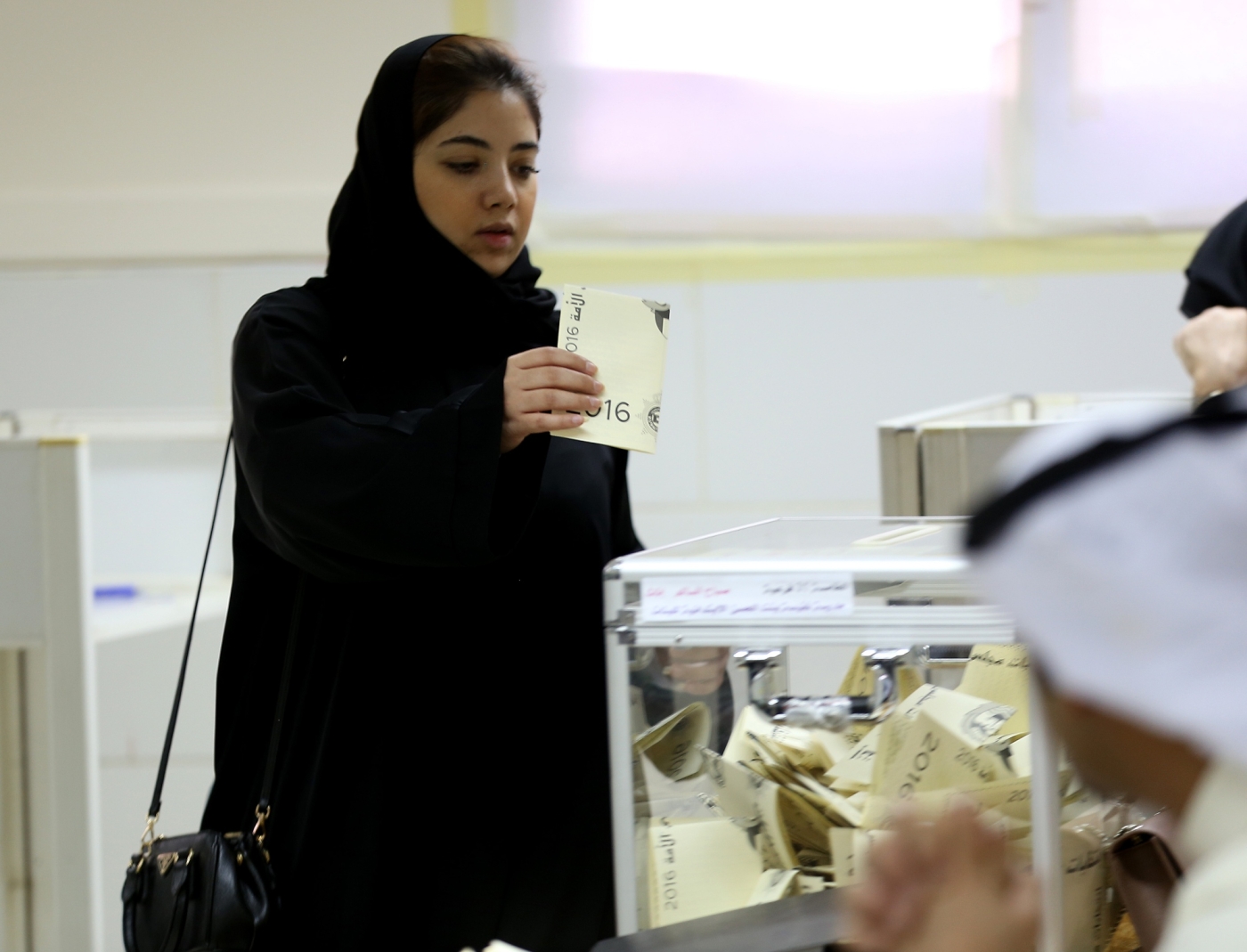 It has been nearly 15 years since women were granted the right to vote and run in elections in Kuwait after decades of advocacy, however their participation in political life remains minimal.

In the last four-year parliament term, which began in December 2016, only one woman, Safaa al-Hashem, was elected as a member of the country’s 50-seat National Assembly, while not a single woman candidate has ever run in municipal elections.

In an effort to ramp up women’s representation ahead of legislative elections scheduled for 5 December, five Kuwaiti activists launched Mudhawi’s List in September, a first-of-its-kind platform in the Gulf state to help women reach elected positions, whether in the assembly, municipal councils, student unions, boards of sports clubs, NGOs, and more. “We hope that in the long term we can contribute to raise awareness about the lack of and need for more women in policy-making positions, and that we can help as many women in all possible elected seats, not just in parliament,” Alanoud AlSharekh, one of Mudhawi’s List founders, told Middle East Eye.

Fifty MPs will be elected by popular vote for a four-year term in the December election, in the context of the Covid-19 pandemic, falling oil prices, and the recent death of Emir Sheikh Sabah, who was succeeded by 83-year-old Sheikh Nawaf.

Despite efforts to make sure women represent a bigger proportion of the assembly this time around, advocates say obstacles remain in their way, both in the political arena and public opinion.

While New Zealand became the first nation to formally allow its women citizens to vote in national elections in 1893, Kuwait, along with the United Arab Emirates (2006) and Bhutan (2008), is the most recent to enfranchise women.

In the 2006 elections, the first that saw women voting and running for office, 28 women candidates joined the race.

Only six women have served as MPs in the years since: Aseel al-Awadhi, Masooma al-Mubarak, Salwa al-Jassar, Rola Dashti, Thekra al-Rashidi, and Hashem. The latter was elected during the last legislative election of 2016, and is now running for re-election.

It’s Bibi Ashour’s first time running for elections. “It is an exciting experience, full of daily challenges, and requires a lot of work and preparation: from television appearances, press interviews, and continuous update of my social media channels,” she tells MEE. “If I make it to the National Assembly, I hope to correct legislative work and draft laws that preserve the value of social justice in society.” According to AlSharekh, the fact that many people in Kuwait still vote for tribal or Islamist candidates contributes to keeping women’s political representation low.

Women who run for elections also risk being stigmatised, even if they win. “Their performance is scrutinised and judged more harshly than that of men. For example, there was a media backlash against the four women who first made it to office in 2006 that was both unfair and off-putting to many would-be female candidates,” says Alsharekh.

Former MP Salwa Al-Jassar has also made no secret of the public pressure she experienced while in office. In a video interview shared in November, Jassar said she has been victim of bullying, including "rumours, insults and abuse". "Ridicule and harm to me and my family is not an expression of opinion, it is a form of inflicting harm," she said.

“We have an insidious and institutionalised aversion against women as well as a cognitive bias that many people are not even aware of,” says Alsharekh. “The government does not appoint women even when it can. For example, in the Municipal Council, there are 10 elected seats and six appointed ones. Since 2005, they have only appointed a maximum of two women in each cycle and in the last 10 years only one woman. Why wouldn’t the government appoint six women to make up for the representational difference?”

In the years she has spent working on women’s rights in Kuwait, Alsharekh said she noticed that even the women who managed to gain enough political experience to run for office usually lack funding and find it difficult to build the right capacity and support networks to enable them to both run and win.

“One of the main challenges is that women do not have access to the same financial resources of political groups, tribes or special interest groups than men,” she says.

Mudhawi’s List assists female candidates regardless of their political affiliations, with essential services such as funding, information, skills development, and the latest technologies, connecting them with creatives and volunteers who will support their campaigns for free or at a discounted rate.

The team summarises candidates’ CVs and presents their political agenda in an eye-catching and shareable format that most candidates then repost on their own social media accounts.

At present, 33 women of the 395 candidates are running for a seat in parliament - the highest ever number. Three of these women already ran for office in the past.

AlSharekh said that one of the aims of Mudhawi’s List is to remind younger women how hard the generation before them had to fight for political rights so they don't take them for granted. “We also want to remind women that there are more of them voting than men, and that those votes are powerful and should be used to make a difference,” she said. Of a total of 567,694 eligible voters, 293,754 are women while 273,940 are men.

In less than three months, Mudhawi’s List has already gained more than 2,000 followers on Instagram. It also boasts a number of volunteers, service providers, and influential women who have offered support and guidance. Is the collapse of the Gulf Cooperation Council's rentier state imminent?
Read More »

But not all are sold on the organisation’s methods, as some have argued that Mudhawi’s List should be more selective and not support all women running. “Shouldn't we be voting for competence and not gender?” one social media user remarked on social media.

Progressing at a slow pace

Although Kuwait has the highest percentage of working female citizens in the GCC and women outnumber men in the workforce - they mainly work in the public sector, as it offers more benefits in terms of allowances, salary and leave - men continue to hold a majority of senior positions.

According to a 2019 OECD report, women’s roles are still largely limited to the household and they still face a number of discriminations. They lack the same legal status and rights as men, and are discriminated against in matters of “divorce, child custody, citizenship, the workplace, and in certain circumstances, the value of their testimony in a sharia court”.

Nonetheless, a new milestone was reached in June, when women prosecutors were appointed to the position of judges for the first time in Kuwait’s history.

“There are many laws and practices that hold women back and need to be reevaluated or abolished, especially those to do with our safety and protection, and those which limit fair and equitable career progression,” says AlSharekh.

Former minister of social affairs and labour Ghadeer Asiri, who is currently running for parliament, says she was optimistic that the election of more women MPs would have a positive effect on Kuwaiti women in general.

“I believe that there is a high probability that women's representation will increase with this election,” she tells MEE. “There are many deserving women who have put forward commendable efforts in their campaigns, and I look forward to working with them in the future in parliament.

“Possibilities of creating more legislation for protecting women's rights will certainly increase” should more women be elected, Asiri opines. “In Kuwaiti parliament, you will still need a majority vote to pass any form of legislation - however, a greater number of women who prioritise women's rights in parliament means a louder and more effective voice for women's issues to be heard and legislation to be created.”

Athra al-Rifai, a lawyer and first-time candidate, agrees.  “The political representation of women plays a big role, because they are a major and important partner in improving the condition of the country and they can provide correct parliamentary work,” she tells MEE. “It is always said that you find less corruption with the presence of women, and so the future of Kuwait will be better.”

While women candidates and rights advocates are resolutely optimistic about the future, AlSharekh says there is still a long way to go.

“We are seeing progress, but at a slow pace and on a smaller scale than we aspire for.”