Lebanese and Israeli soldiers in altercation over border fence Lebanese soldiers monitor the border with Israel near the southern Lebanese village of Meiss el-Jabal, 16 December (AFP)
By
MEE staff

Lebanon's army announced on Monday a state of high alert after Lebanese soldiers were involved in an altercation with Israelis soldiers, preventing them from unrolling a barbed wire fence in the south of Lebanon, Lebanese media reported.

A video distributed of the incident showed Lebanese and Israeli soldiers holding rifles and standing a couple of metres apart as they argue where the barbed wire is to be unrolled near the Lebanese village of Meiss Ej Jabal.

Members of the UN peacekeeping forces, known as UNIFIL, were present and intervened to separate the two sides.

A Lebanese officer appears in the video telling the UNIFIL forces to move the barbed the wire "behind the [olive] tree".

The Lebanese soldiers refused to allow the Israeli soldiers to erect the fence without the expertise and presence of the Lebanese army's geography unit.

Israeli soldiers ended up moving the fence behind the international blue line – the frontier since Israel's withdrawal from Lebanon in 2000 – to the Israeli side, Haaretz reported.

Translation: This is a first lieutenant in the Lebanese army.

Israeli forces occupied south Lebanon from 1982 until 2000, when Ehud Barak, Israel's prime minister, announced their withdrawal. In Lebanon, the withdrawal was called "the liberation of south Lebanon."

Lebanese civilians and military forces have been patrolling the borders and facing Israeli soldiers since Israel launched its "Operation Northern Shield," in November, to spot tunnels dug by the Hezbollah movement near the southern border.

Israel said it had found four "Hezbollah attack tunnels" that crossed from Lebanon into Israel.

Some Israeli critics saw the operation as a tactic by Prime Minister Benjamin Netanyahu intended to provide a distraction from corruption allegations in which he is embroiled. 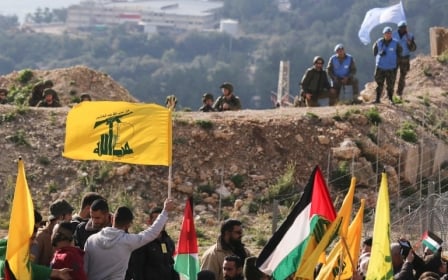