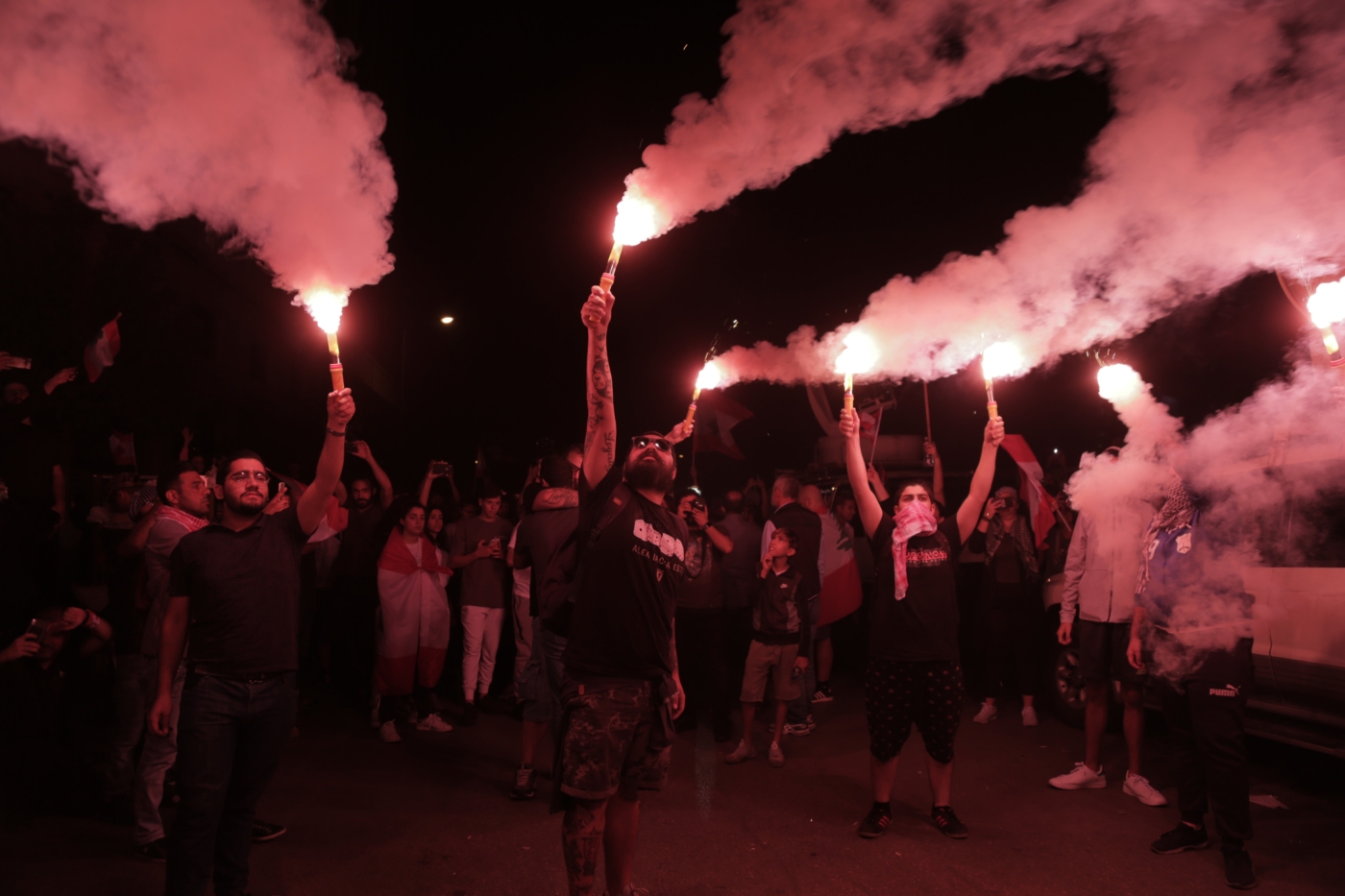 The Ultras Supernova, fans of the Lebanese Nejmeh football club, light flares in front of Grand Sarail, the seat of the Lebanese government, on 26 October (Ali Gharbieh/MEE)
By
Heba Nasser
in
Beirut

As another night of demonstrations wore on in Lebanon, a dozen young men made their way through the crowd in front of the Grand Serail, the seat of the country's government, where people have been protesting since mid-October.

There, fans of Beirut's Nejmeh football club, known as Ultras Supernova, huddled together, passing flares between them.

Moments later, they formed a circle in the middle of the crowd and lit up the night with red flames - a scene that demonstrators have become used to seeing.

"The saying goes: 'Light a flare to erase the darkness' - and that's what we have been doing every night," said Nouri, one of the Ultras Supernova who have been taking part in the protests since they started on 17 October.

Nationwide protests in Lebanon were sparked by an impending series of taxes that the government said were designed to raise revenues and reduce the country's staggering public debt.

However, the proposed measures angered millions of Lebanese who, already struggling to make ends meet, felt they were being made into scapegoats by the country's elite.

"The uprising today is a class struggle, rather than political, and the ultras see themselves as part of this struggle," said Mohamed Gharbieh, 31, also an Ultras Supernova.

Who are the Ultras?

Hundreds of thousands of protesters from different backgrounds have blamed the crisis on what they call a band of corrupt politicians, and they are demanding the resignation of the government.

Football ultras in some Arabic countries, including Egypt, Tunisia and Morocco, have used their space on the stands, especially since the 2011 Arab Spring, not only in support of their teams, but to also raise their voices against socio-economic injustices.

"Ultras usually come from working-class backgrounds and this is our way of struggling against the system," Gharbieh said.

"Two weeks before the protests started, we raised a banner during a football game that said, 'If the people go hungry, they will eat their rulers'".

The Nejmeh Sporting Club was founded in 1945 in Manara, a district of Ras Beirut, and is one of the major football clubs in Lebanon.

Today, as the largest anti-government demonstrations Lebanon has seen in years go on unabated, the Ultras Supernova say that they are continuing what they started in the stadium.

"A lot of the chants being sung out at the protests today came from the stands," said Gharbieh.

They also say they are working with other protesters to stop the uprising from getting sidetracked, and trying to keep people focused on their initial demands.

"When there's this amount of people in the streets, it's easy for the conversation to divert from the reasons why we started protesting in the first place," Gharbieh said.

Frustrated with growing poverty, rising unemployment and the depreciation of the Lebanese currency, protesters have massed in squares in cities and towns across the country.

Lebanon has one of the world's highest levels of government debt at $86bn - more than 150 percent of the country's gross domestic product.

So far, attempts by the country's leaders have failed to placate the demonstrators, who have repeatedly blocked major roads and refused to allow the status quo to resume, leading banks, schools, and many businesses to temporarily shut down.

"We don't have loose demands. We want a gradual, systematic change in the government. We also demand a stop to the astronomical amount of money that the government spends on God knows what," said Nouri.

Gharbieh added that chanting against poverty and social injustice is part of the ultras' culture.

Still, no chants were heard as the Ultra Supernovas stood silently, watching their flares burn.

And when the fires went out, they dispersed into the crowd. 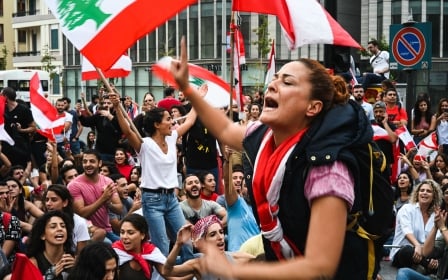 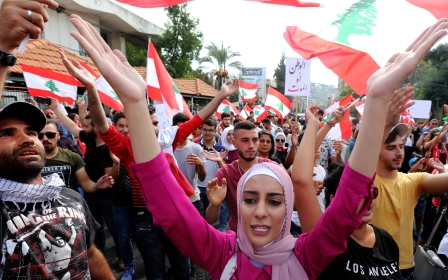