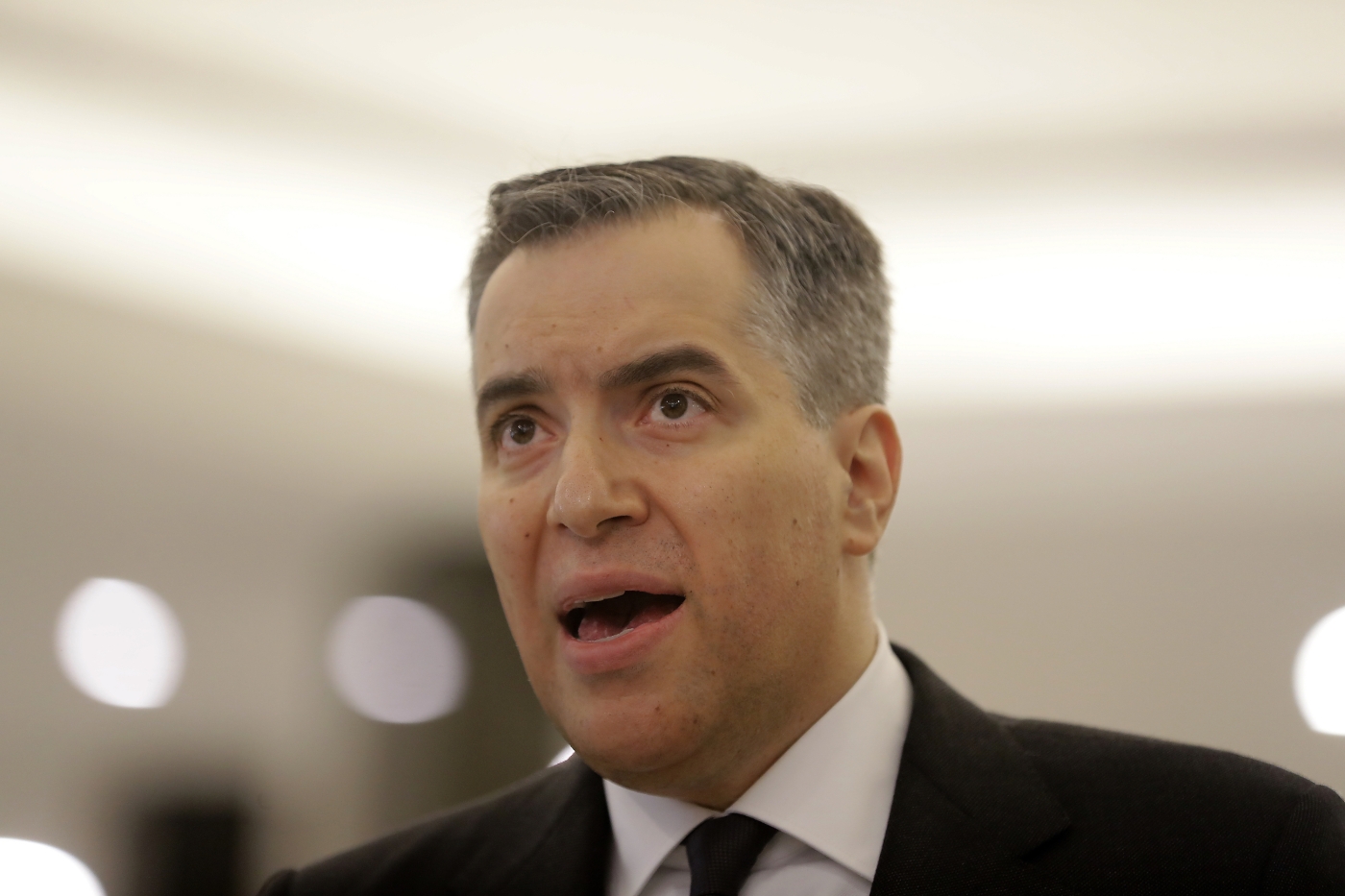 Mustapha Adib, Lebanon's prime minister-designate, speaks during a press conference at the presidential palace in Baabda, east of Beirut on 31 August (AFP)
By
MEE and agencies

Lebanon named its envoy to Germany, Mustapha Adib, as the new prime minister on Monday after he had secured the support of a majority of lawmakers.

The presidency made the announcement in a televised statement, as Adib arrived at the palace in Baabda near Beirut to meet President Michel Aoun and Parliament Speaker Nabih Berri.

The prime minister-designate called for the formation of a new government in record time and for the immediate implementation of reforms as an entry point for an agreement with the International Monetary Fund (IMF).

"The opportunity for our country is small and the mission I have accepted is based on all the political forces acknowledging that," Adib said, after he had been formally designated by Aoun.

Donor states want Lebanon to carry out long-delayed reforms to stamp out state corruption and waste in order to release financial support.

The previous government launched talks with the IMF in May but these stalled amid divisions on the Lebanese side over the scale of losses in the financial system.

Adib, 48, was born in the northern city of Tripoli and is a Sunni Muslim, making him eligible to become prime minister under Lebanon's sectarian-based power-sharing system.

The previously little-known diplomat had been Lebanon's ambassador to Germany since 2013, and his name only emerged on Sunday to replace Hassan Diab, whose government resigned in the wake of the catastrophic explosion at Beirut port.

In Monday's official consultations with Aoun, Adib secured at least 66 votes, or more than half of the 120 MPs currently serving in the Lebanese parliament.

Lebanon's parliament usually has 128 MPs, but eight resigned following the Beirut port explosion on 4 August, in which 190 people had been killed.

Meanwhile, Berri on Monday called for change to the country's confessional political system in the aftermath of the port blast, blamed on official negligence and corruption.

"The most dangerous thing that the port disaster revealed... is the total collapse of the political and economic system's structure," Berri said shortly after the president designated Adib as the new prime minister.

"Therefore, there must be a change to this confessional system, which is the cause of all ills."

The nomination of Adib followed pressure from French President Emmanuel Macron during the last 48 hours for Lebanese leaders to agree on a candidate, two senior Lebanese officials said, ahead of a visit by the French leader to Lebanon later on Monday.

Macron was scheduled to meet politicians on Tuesday. Macron had taken centre stage in international efforts to get Lebanon's fractious leaders to start addressing the country's financial crisis, which had devastated the economy even before the 4 August port blast that killed at least 190 people.

A French presidency source said that Macron had been in contact by phone with the main protagonists on Saturday and Sunday. "The president is informed of the negotiations underway in Beirut," the source said.

Last week, talks between Lebanese leaders to agree a new prime minister had been deadlocked. One of the two senior Lebanese sources said that Macron's role had been essential in clinching the agreement on Adib.

The previous government, led by Diab, had resigned on 10 August over the port blast, in which a massive amount of unsafely stored chemicals had exploded.

Support from all sides

Adib has a doctorate in law and political science and had previously served as an adviser to Najib Mikati, a former prime minister. He had served as Lebanon's ambassador to Germany since 2013.

The post of prime minister must go to a Sunni Muslim in Lebanon's sectarian system. President Aoun, a Maronite Christian, must designate the candidate with the greatest support among lawmakers.

On Monday, the Future Movement, the powerful Iranian-backed Shia party Hezbollah and the Progressive Socialist party, led by Druze politician Walid Jumblatt, were among the first to nominate Adib in formal consultations hosted by Aoun. The Christian Free Patriotic Movement (FPM), a political ally of Hezbollah, which was founded by Aoun and is now led by his son-in-law, Gebran Bassil, would do the same, Bassil told Reuters.

After meeting Lebanon’s president on Monday, Hariri called for the quick formation of a government of specialist ministers.

Lebanon's financial crisis has sunk the currency by as much as 80 percent since October, locked savers out of their accounts in a paralysed banking system and fuelled poverty and unemployment.

Lebanon had launched talks with the International Monetary Fund in May, after defaulting on its huge debt, in an attempt to secure financial support. But these negotiations had stalled amid divisions on the Lebanese side over the scale of financial losses.