Lebanon releases US citizen accused of torture at Israel-backed prison

Known as the 'Butcher of Khiam', Amer Fakhoury is accused of torturing detainees when he was part of Lebanese militia working for Israel Protester in the southern Lebanese village of Khiam holds sign that reads, 'Betraying the country is not a point of view', 15 September 2019 (AFP/File photo)
By
Kareem Chehayeb
in
Beirut

Lebanon's military tribunal ordered the release of Lebanese-American national Amer Fakhoury, who had been held on charges of torturing detainees while working for an Israeli-backed Lebanese militia two decades ago.

The ruling, first announced on Monday, drew the ire of former detainees who called the decision "political".

He was released after the court found that his crimes could not be prosecuted because they occurred outside the statute of limitations.

Ali Atweh, a student from Khiam based in Beirut, said he was disheartened by the decision, considering the "pain and suffering" that the southern Lebanese village endured under the Israeli occupation.

'This was a political decision. Only God knows the price we will pay for this…for the victims, the mothers of the victims, and the martyrs'

"My father at first did not believe [the news] and told me it's probably false news," Atweh said. "But when he read it, he just smiled [and said], 'yeah I don't expect anything from this country'."

Fakhoury was detained after returning to Lebanon on 12 September 2019, with a United States passport. He admitted during his interrogation with the Lebanese intelligence service that he was a warden at the Khiam prison.

His questioning was postponed several times due to illness, having undergone chemotherapy treatment after developing stage-4 lymphoma. A crowdfunding campaign was set up for his treatment on behalf of one of his daughters, Zoya Fakhoury.

Israel occupied southern Lebanon in 1982 and withdrew from most territories almost in 2000.

After Israel's withdrawal, Fakhoury, now 57 years old, fled to the United States via Israel, but only received citizenship last year through one of his children.

He resettled in Dover, New Hampshire, where he ran a restaurant called Little Lebanon To Go.

The French mandate-era barracks turned prison in the southern town of Khiam left a bitter legacy, often described as a torture centre.

His lawyer, Celine Atallah, said that Fakhoury's involvement with the prison was "strictly logistical" and he was not involved in direct contact with any of the detainees. She did not respond to Middle East Eye's request for comment.

Israel has always claimed that it had nothing to do with the infamous prison and that the facility was administered and under the authority of only the SLA. However, it also admitted to having held meetings with the prison's interrogators to cooperate and assist SLA personnel with training.

Human Rights Watch and other rights groups say there is ample evidence that indicates direct Israeli involvement in the prison, including frequent visits and being involved in interrogations.

Former prisoners say they were hit with electronic rods, hung by their wrists, and put in small cells that resembled "dog kennels" as punishment.

Fakhoury's family members not only deny his involvement in any of the torture that took place in Khiam Prison, they also dismiss the testimonies of former detainees.

Zoya Fakhoury said late last year that the prison resembled a five-star hotel compared to other prisons in Lebanon and the Middle East.

"The so-called witnesses never attended the prison or attended at a time when Amer was not working there! The fact that many people believe that my father is a murderer based on accusations coming from an actual terrorist organization really says a lot about them," she wrote on Twitter last month, referring to Hezbollah.

Israeli warplanes eventually bombed the remains of the prison during its six-week war with Hezbollah in July 2006.

At a time of mounting economic crisis, Beirut faced pressure from Washington to release Fakhoury.

Last month, New Hampshire Democratic Senator Jeanne Shaheen sponsored a bill that would sanction current and former Lebanese officials involved in the "unlawful detainment, arrest or abuse of any United States citizen in Lebanon". Republican Senator Ted Cruz was also at the forefront of this bill.

Senator Shaheen, Fakhoury's lawyer, and his family accused Lebanese authorities of torturing Fakhoury to obtain forced confessions from him. 'Mistakes of the past': Lebanon PM says country must default on its debt
Read More »

The United States Embassy in Lebanon chose not to comment on the Fakhoury case when contacted by MEE. Senator Shaheen did not respond to MEE's inquiry either.

"Mr Fakhoury, a US citizen, is being released after several months as a result of a bill recently introduced by Senators Shaheen and Cruz, which called on sanctioning the Lebanese government for taking an American citizen hostage," Tony Badran, research fellow at the Foundation for Defense of Democracies, told MEE.

Local media outlets have reported meetings between then-Foreign Minister Gebran Bassil and US diplomat David Hale on the matter. Local daily Al-Liwaa said last December that Hale and Bassil discussed in Beirut a "prisoner swap" to free Fakhoury in exchange for Qassem Tajjedine, a Lebanese businessman detained in the United States on charges of financing Hezbollah.

Bassil did not respond to any of these reports until today. His press office issued a statement condemning local daily Al-Sharq over an article that claimed the ex-foreign minister played a key role in releasing Fakhoury.

The statement said Bassil does not know nor has any relations with Fakhoury, and that he will take the matter up with the newspaper in court.

Regardless of the behind-the-scenes decisions that led to Fakhoury's release, the outcome of the case left former detainees with a bitter feeling.

Lebanese lawyer Nizar Saghieh said the court decision was based on flawed legal analysis because it had been proven that Fakhoury participated in forced disappearances, which are considered in-progress crimes.

"The fact is that the crime of forced disappearances is considered in-progress and does not fall outside of the statute of limitations as long as the fate of the victim is still unknown," he said in a tweet. Testimonies of former Khiam prison detainees and relatives have claimed that prisoners went missing after being abducted and taken to the facility.

Lebanon's 2017 torture law has a 10-year statute of limitations.

Lebanon joined the UN Convention against Torture and its Optional Protocol in 2000 and 2008, where it is obliged to not have a statute of limitations for crimes of torture and ill-treatment.

Hassan Bazzi, a lawyer leading a separate case against Amer Fakhoury on behalf of former detainees and their families, told MEE that a court case scheduled for 16 March was postponed only for the military tribunal to acquit Fakhoury of all charges.

"Crimes against humanity have no statute of limitations," he told MEE, adding that Lebanon's obligations under international law should take priority over Lebanese regulations.

On Tuesday, a judge of urgent matters in the southern town of Nabatieh approved a travel ban request against Fakhoury that would keep him in Lebanon for another two months.

"This was a political decision," Bazzi said. "Only God knows the price we will pay for this…for the victims, the mothers of the victims, and the martyrs." Covid-19
Fight breaks out on Lebanese flight amid coronavirus panic 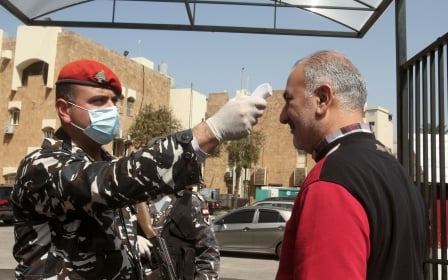