Lebanon's security services have been raiding fuel stockpilers across the country as crippling power cuts and long lines at petrol stations have continued to make life in Lebanon unbearable.

Millions of litres of gasoline and diesel fuel have been stashed by importers and distributors right under the noses of the country's army and police.

In most of their raids, the security forces often discover thousands of litres of fuel in plastic containers, tanks, or underground. But last week they raided a warehouse in the eastern city of Zahle, and discovered almost two million litres of stashed fuel.

'Ever since talk of lifting the subsidies on certain imports, a lot of traders or importers of these products, particularly fuel, started speculating that the prices will increase'

The Internal Security Forces said it belonged to a gas station owner, without revealing their identity. According to local media, that owner is Ibrahim Sakr, who owns a large chain of petrol stations and is a partisan of the right-wing Christian political party, the Lebanese Forces.

Sakr’s lawyer says his client has nothing to do with the hoarded fuel in Zahle. Meanwhile the Lebanese Forces party called claims of their association with the confiscated fuel a flat-out lie.

“The Lebanese Forces challenges those in the media or on social media to pair this lie with minimal evidence and name an incident where the Lebanese Forces intervened with the security agencies to provide cover for anyone,” the party said in a statement.

That being said, Saqr never showed up to be questioned.

The raid in Zahle is one of many over the past two weeks, as the Lebanese army and Internal Security Forces continue to raid gas stations and warehouses illegally hoarding state-subsidised fuel.

“Ever since talk of lifting the subsidies on certain imports, a lot of traders or importers of these products, particularly fuel, started speculating that the prices will increase,” Sami Zoughaib, an economist at local think-tank The Policy Initiative told MEE.

“So their rationale is, ‘Why not keep these goods with me and sell them later at a higher price?’”

As long power cuts cripple homes, hospitals, and bakeries, demand is higher than ever. Following their raids, the army often partially distributed fuel to residents in need, keep some for their own stock, or ask the gas station to open their establishment and sell at the government-regulated rate.

Economic experts say this mess is the result of the country’s expensive subsidies on fuel, wheat, and medicine, where the Central Bank shelled out US dollars to Lebanon’s licensed fuel importers to keep gasoline and diesel fuel prices steady.

The subsidies cost around $6bn annually, and the pricing does not reflect the spiralling local currency that lost about 90 percent of its value. The Central Bank says it can no longer pay for these reserves and wants to lift subsidies, while the government struggles to implement a cash card programme to soften the blow of these price hikes as residents and citizens don’t have a viable social safety net to fall back on.

Lebanon’s already dire economic crisis has taken a turn for the worse in recent months, as its shaky subsidies programme continues to wither. Millions of people struggle to find fuel to top up their vehicles and keep the lights on at home.

Power blackouts plague Beirut and the rest of the country, while dozens - if not hundreds - of drivers anxiously queue up daily at gas stations for hours a day, while soldiers and police officers try to stop scuffles and skirmishes.

For now, petrol stations say they’ve run out of gasoline.

Meanwhile, the country’s expensive and unwieldy state-owned electricity company no longer provides a jolt of power, forcing hundreds of thousands of households to pay even more for privately owned diesel generators. Private generator owners now say their generators are breaking down and they cannot secure fuel due to the high demand.

Today, most households spend much of the day without electricity.

But Lebanon’s dwindling cash reserves and poor policy are only one part of the problem. Illicit fuel and diesel, sold in plastic gallon containers at exorbitant prices, have dominated the market, while licensed fuel distributors and gas stations are hoarding their stock, waiting to sell it for a higher profit, including in neighbouring Syria.

Lebanon’s cash-strapped army has tried to patrol its porous borders with Syria and shut down illicit pipelines, but its capacity is minimal.

Lebanon has 13 licensed fuel importers and distributors that effectively control the market. Many economists go as far as saying that they function as a monopoly, while some, like Marc Ayoub, energy researcher at the American University of Beirut’s Issam Fares Institute, calls them a “cartel”.

“This is a politically connected cartel that only cares about profit,” Ayoub told MEE, adding that there are “tons” of hoarded fuel across Lebanon that could be used to keep hospitals and bakeries functioning.

“But it’s all about profit to them. Nobody wants to bear part of the loss, they want to accumulate profits.”

Ayoub said he understands why security agencies primarily raided gas stations, given that they directly trade with the consumer.

“The end-user benefits from the quantities [of fuel] in gas stations and warehouses,” he said. “But there are lots of places they [security agencies] didn’t go.”

Most of the gas stations that were raided were relatively small businesses, he explained, and not the large franchises linked to the cartels or the importers’ warehouses. The raid in Zahle was a pleasant surprise for Ayoub, but is likely an exception.

'They’re raiding [places] with tens of thousands of litres, but then they come and take our two jugs of fuel?'

In fact, animal rights group Animals Lebanon were surprised to see security forces at their door one morning. The organisation kept an extra 50 litres of fuel for their one vehicle used to rescue animals, often in collaboration with the Lebanese authorities. “It’s one thing if we‘re hoarding, trading, and selling - but we’re just using this to refuel our car,” executive director Jason Mier told MEE.

“It caught us off guard. They’re raiding [places] with tens of thousands of litres, but then they come and take our two jugs of fuel?”

Mier says they can’t afford to wait for long hours in line at the gas station every day, “otherwise, we won’t be able to do our work”.

The Lebanese authorities have promised that they would crack down on smuggling and hoarding to ensure that fuel is being sold legally at the regulated rates. But according to Ayoub, with this current framework in place, the main perpetrators and benefactors with political cover will always get off scot-free.

Two weeks ago, a seized fuel tank in the poverty-stricken Akkar province exploded as the army distributed containers to a large crowd. Over 30 people died, while 79 others suffered severe injuries, several succumbing to their wounds days later.

Local media outlets claim the owner of the property was linked either with the Saudi Arabia-backed Future Movement or President Michel Aoun’s party, the Free Patriotic Movement. Both parties have denied these claims.

Lebanon’s military court has so far accused two individuals of dangerously storing the fuel, and another for causing the explosion. But will they hold to account the company hoarding the fuel and possibly selling it on the black market?

The Lebanese Army declined to comment on matters related to the raids and the investigation into the Akkar explosion, while the Internal Security Forces have not responded to several inquiries from MEE.

“How do we break this cartel? There is nothing on the horizon today that says we can do so,” Ayoub said, almost in defeat. “The state signs them off and works with them as their partner. They are politically connected.”

Perhaps what has happened over the past two weeks foreshadows the authorities efforts to curtail medical suppliers hoarding subsidised medicine, from painkillers to cancer treatments.

The health ministry has raided medical warehouses in recent days, forcing suppliers to sell at subsidised rates to pharmacies, hospitals, and even to the public. And much like the Saqr incident in Zahle, the ministry, alongside caretaker Health Minister Hamad Hassan, raided a warehouse co-owned by Hussein Fneish, the brother of Hezbollah MP and former minister Mohammad Fneish. Following the raid, Hamad Hassan, also Hezbollah-affiliated, said on Lebanese state television that because Fneish and his partners only hoarded a relatively small amount of medication, that the ministry only asked him to sign a pledge to sell the medicines to pharmacies and directly to the public.

The following day, after public outrage, he said on Twitter that the hoarders have been arrested and the judiciary is investigating them.

Zoughaib, the economist, says that while it is unrealistic to end smuggling and hoarding entirely, Lebanon could have limited the impact far better if it had viable and independent state and judicial institutions.

“Mitigation requires solid oversight institutions, policing, and rule of law, something that we lack completely in Lebanon,” Zoughaib said. Lebanon’s judiciary is not financially or administratively independent from the political authorities.

Government regulatory and oversight authorities lack resources and transparency, and certainly are not free from political patronage.

“The prerequisites of sound oversight do not exist in the country.” 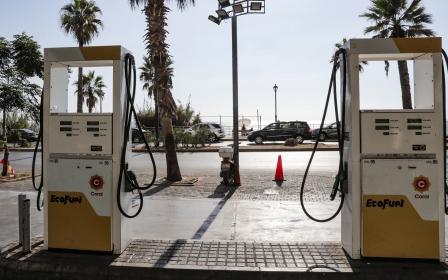