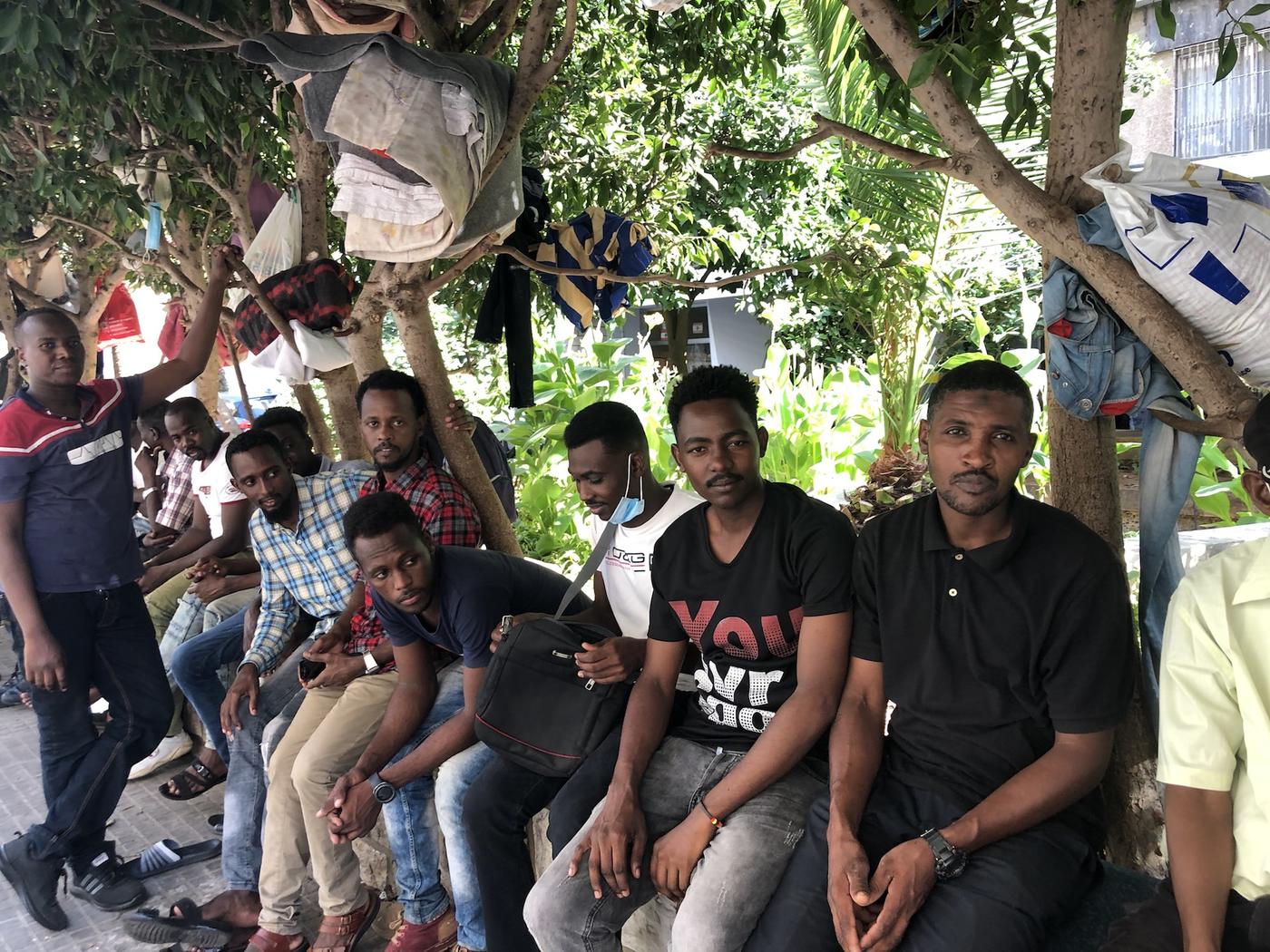 Sudanese migrant workers have been protesting outside Khartoum's embassy in Beirut, demanding to be brought home (MEE/Jonathan Dagher)
By
Jonathan Dagher
in
Beirut

In the unforgiving heat of a long Beirut summer, more than 60 Sudanese expatriates have resumed their protest in front of their embassy for the fourth month in a row.

Since they began their sit-in in June, the narrow pavement lining Madame Curie Street in the Hamra neighbourhood has become their only home.

The Sudanese citizens band together under the shade of trees, awaiting news from their embassy, which they accuse of turning a blind eye to their plight. At night, they sleep on mattresses fashioned from cardboard and t-shirts.

Their demand is simple: they want to go home. 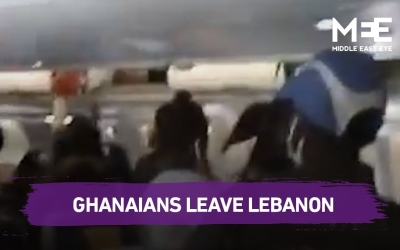 "We came to Lebanon to eat and live. Now they've stopped paying us and we can't even eat anymore. We want to leave," Mohamad Taha, one of the protesters, told Middle East Eye.

A year of economic crisis, compounded by tough measures imposed to curb the spread of the coronavirus and devastation wrought by the port explosion, has driven many of these workers' employers out of business.

For months, these protesters have been caught in limbo in their negotiations with both Lebanese and Sudanese authorities. A fundraiser set up by volunteers and activists bought plane tickets for 77 workers to Khartoum, but it covered only a small percentage of those who want to leave Lebanon.

Migrant workers, many of whom get paid by the day, are left struggling for cash, unable to afford the most basic of needs, including food and shelter.

Almost 2,700 workers have put their names down for repatriation at the Sudanese embassy, and at least 60 remain homeless in front of its headquarters.

Standing between them and their homeland is a list of expenses they can't afford, as well as legal hurdles.

"Before we can travel, we need to pay General Security a penalty fee," said Ishak Abdallah, another Sudanese protester, referring to the Lebanese governmental body that deals with national security.

Lebanese law requires migrants who came into the country illegally to pay a 650,000 LBP ($430) penalty fee before they can leave. Occasionally, the General Security (GS) waives the charge during specific grace periods, in coordination with consulates and embassies.

But rather than waiving the fees of all migrant workers at once, the directorate has approached the matter on a case-by-case basis. The fees represent a significant source of income for the Lebanese state, and waiving them in batches translates into months of delays for migrants yearning to go back home.

"A lot of us came into Lebanon illegally," another protester told the Middle East Eye. "We couldn't afford the paperwork."

Other protesters nodded in agreement. Although legal ways of entry through employment agencies are readily available, the paperwork is complicated and costly, and it imposes harsh working and living conditions under a kafala sponsorship system which migrant workers and activists have repeatedly described as "modern slavery".

Many Sudanese migrants come to Lebanon by land, making their way through Egypt and Syria, before crossing the Lebanese border in search of basic needs and, for some, refuge from harm.

"Many Sudanese don't have the option of coming into the country legally," said Rahaf Dandash, a case worker at the non-profit Anti-Racist Movement (ARM). "They leave their country escaping armed conflict, poverty, assault, legal and physical threats or other dangers. Most arrive without money and papers."

Those who come to Lebanon seeking refuge, says Dandash, should be treated as asylum seekers and have their cases investigated.

But in the absence of proper frameworks, most migrants are dismissed as "illegal". This excludes them from social, economic and legal privileges, and leaves them vulnerable to exploitation, abuse, and human trafficking.

Normally, this undocumented status would put them at risk of deportation. However in the middle of an economic crisis as well as a pandemic, the migrants find themselves facing the opposite dilemma - they are now trapped in Lebanon with no way out.

On 30 June, dozens of Sudanese workers organised a march from their embassy to the General Security headquarters in Ashrafieh, asking to be returned home. The protest garnered enough attention to drive the Sudanese embassy into negotiations with General Security.

Protesters told MEE the embassy has been handling the process with the GS on their behalf.

"We wait here for news, day and night," said Karim Allah, who is in the committee leading negotiations with the embassy. "We sleep on this sidewalk and we wait for someone to come out with updates. It's like they have forgotten about us."

But the embassy seems to hold a more optimistic view.

"General Security has been very cooperative regarding the repatriation procedure," he added.

According to Motasem, the legal documents of 220 more workers still remain at the General Security directorate, awaiting release.

When Sudanese migrants launched their repatriation protests in June, Beirut's Rafic Hariri Airport was closed for commercial travel as part of a nationwide Covid-19 lockdown imposed by the interior ministry.

When authorities finally announced the airport would reopen on 1 July, many Sudanese were already out on the streets, unable to afford food and water, let alone plane tickets to go home.

"We have no money for tickets. We sleep on cardboard. We rely on donations to eat and drink, we go to friend's houses to shower, we wait for nightfall to go to the toilet behind a corner," said Karim Allah.

The average flight to Khartoum costs around $400. But as the Lebanese pound crumbles, local banks have blocked transfers from abroad, and most airlines will only accept cash payments in dollars.

It has become more and more difficult for even the wealthiest of Lebanese to get their hands on dollars. For migrant workers, it’s nearly impossible.

"We can't just save enough money and go. There's no way to earn it," said one protester.

Many migrant workers find themselves depleting the precious savings they accrued over years of hard work. For those protesting in front of the embassy, they have not just lost money, jobs and homes, they have also been denied income for work that they have already completed.

Othman Abdel Baker Yehya was a janitor at a restaurant in Beirut. When the restaurant let him go in May, it owed him several months' salary - a total of $1,700. He said the restaurant never paid him back.

This seems to be an ongoing theme for many migrants. Hady Jaafar said he was still owed $650 by the butcher he had worked for. And Mohamad Siddig, who was hired to carry out cleaning duties at a restaurant, said the owner refused to pay him the agreed $1,200 for his service.

"When we asked for our money, they just kicked us out," said Awad Ali, another protester. "They told me to stay out of the store, so here I am." Since March, more than 220,000 employees in Lebanon's private sector have lost their jobs. However this number excludes undocumented immigrants and migrant workers who work on a contractual basis.

Between April and September 2020, ARM received 600 calls from migrant workers threatened with eviction, according to a statement posted on the group's website.

Across the capital, Beirut, migrant workers abandoned by their employers have set up camp in front of their embassies and consulates, partly in protest at the treatment they've received, and partly because they have nowhere else to go.

While some embassies have facilitated the return of their citizens, others have been less cooperative. Sudanese workers say their embassy has fallen short on its duties.

"It is the Sudanese embassy's fault. They don't look at us. We're sleeping on the streets," said Karim Allah.

In May, the situation in Lebanon got so bad that five Sudanese workers tried to cross the border into Israel, but they were caught and returned to Lebanese authorities.

'It's safer in Sudan'

Sudan, like Lebanon, faces a number of challenges - including a collapsed economy, the coronavirus pandemic, political instability as well as recent disaster.

Last year, longtime ruler Omar al-Bashir was toppled after a surge in living costs led to a citizens’ revolt. The country has been run by a transitional government ever since, with little economic improvement.

In early September, Sudanese authorities declared a three-month state of emergency following record-breaking torrential rain that caused more than 100 deaths and damaged thousands of homes across the country, in the middle of the pandemic.

However, many migrants still long to return home.

"It's bad in Lebanon and it's bad in Sudan, but it's safer in Sudan," Karim Allah told MEE.

The ammonium nitrate explosion that ripped through Beirut on 4 August killed almost 200 people and left 300,000 others homeless. In the weeks that followed, several smaller fires were also reported, causing many in the capital to fear for their safety.

No official census by the Lebanese government attempted to account for the number of migrant workers left missing, injured, or dead by the port blast, and most counts were the result of personal initiatives by non-profit groups communicating directly with migrant communities to collect the names, according to Dandash.

Even if they weren't physically harmed by the explosion, many migrant workers still suffered from trauma after losing income and shelter following the blast.

"These communities had already been suffering and protesting for months, and then the explosion happened and took away even more jobs and homes," Dandash said.

Asked whether the floods in Sudan were delaying repatriation efforts, the Sudanese embassy said the paperwork process was still in motion, unaffected by the ongoing natural disaster back home.

The protests have helped draw some attention to the plight of migrant workers. Most of the people camping out in front of embassies and consulates have been relying on the kindness of strangers and volunteers to survive. Friends of the Sudanese, a volunteer-led activist group in Beirut, has been on the ground for months helping protesters to get access to basic needs. Online fundraisers have collected $23,000, enough funds to buy plane tickets and coronavirus tests for 77 Sudanese citizens - among them was a Sudanese woman who had just given birth.

"We've been contacting our network of friends abroad who can help," said a spokesperson for the group. "We can't do much, but we can connect the protesters to our networks in international communities. There has been a lot of momentum after the explosion, so the donations have been coming in."

But hundreds of Sudanese people still can't afford their return trips, as activists and protesters agree that they shouldn’t have to rely on donations and fundraisers to return home in the first place.

A statement published by ARM on 24 August referred to "systemic obstacles" standing in the way of migrant workers in Lebanon.

Most of these obstacles are either the direct or indirect results of Lebanon's kafala system. Migrant workers under kafala are excluded from Lebanese labour law and the rights it guarantees for locals, such as a right to unionise, receive severance packages, quit jobs voluntarily, take days off, or even go on strike.

It is this system, activists say, that has created the circumstances leading to migrant workers sleeping in the streets, awaiting donations to go back home.

In early September, Lebanon's caretaker Labour Minister Lamia Yammine issued a standard unified contract that "enshrines the rights" of the foreign workers, calling it "the end of kafala".

However, rights groups have warned that strict enforcement, including labour inspections and complaint procedures, would be required to dismantle the kafala system, which binds migrant workers to one employer and is common across the Middle East.

When contacted by MEE, Yammine was not available for comment.

For many Sudanese protesters and other migrant workers camping out in front of their embassies, the new law makes little difference. At best, it may help future migrants. But for those already on the street, the reform has offered too little, too late. 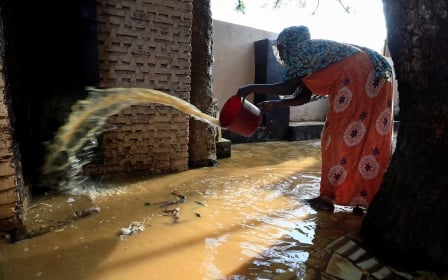 Covid-19
Coronavirus in the Arab world: Can survival turn to recovery?
Massoud Hedeshi