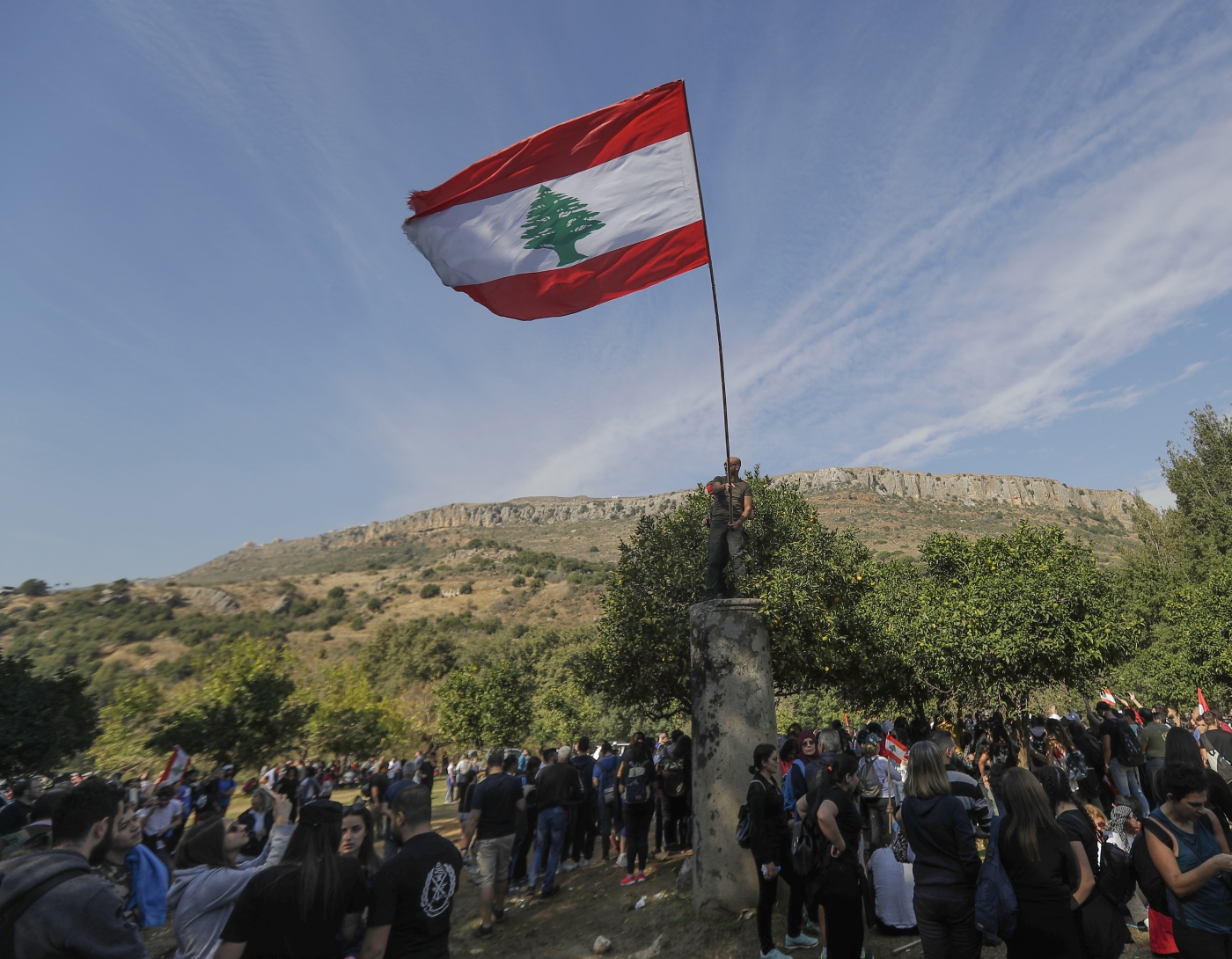 Campaigners raise a Lebanese flag during a protest against the construction of a dam in Bisri Valley, on 22 November 2019 (AFP)
By
Kareem Chehayeb
in
Beirut

A controversial dam project in a lush valley southwest of Beirut has suffered a major setback, after its main sponsor the World Bank called on the Lebanese government to hold an “open public dialogue” to address concerns raised by campaigners against the plan.

The Bisri Dam Project, also known as the Lebanon Water Supply Augmentation Project, was first approved by the World Bank back in September 2014. The organisation had allocated funds for a loan amounting to $617 million, calling it one of their largest projects in Lebanon.

By 2024, the World Bank promised in 2019, the dam would have helped the country secure “clean and reliable water supply to over 1.6 million people” living across the Great Beirut and Mount Lebanon region.

While the plan had received support from Lebanon's ruling political parties, it was met with uproar from environmentalists and local residents who feared irreversible damages to the region’s rich ecosystem.

For years, campaigners have called for the project to be scrapped completely and for the site to be turned into a nature reserve. Now their voices seem to have been heard.

On Thursday, the World Bank released a statement that put doubts on the project’s future.

“Given strong stakeholder concerns about the [Bisri Dam] Project, the World Bank has requested the Government of Lebanon to launch an open and transparent public dialogue to address the concerns raised by citizens and civil society groups,” said Saroj Kumar Jha, World Bank Mashreq regional director.

He also announced the re-channeling of $45.5m from two other projects' funding to help with Lebanon’s efforts to combat the coronavirus outbreak which - compounded by the ongoing economic crisis - has trapped the country in an “unprecedented crisis”.

“The World Bank is open to government of Lebanon’s suggestions as to how the existing portfolio, including undisbursed amounts from the Bisri project, could be used more effectively to respond to the emerging needs of the Lebanese people,” Jha added.

Prior to the latest announcement, the Lebanese government had begun work on the dam after receiving the first portion of the World Bank’s loans.

The early stages of land clearance have already begun, although activists camping out in the valley during the country’s popular uprising that began last October have held back construction efforts.

Lebanon’s collapsing economy and the Covid-19 outbreak have also helped stall the project.

Now, the World Bank’s latest statement has given a morale boost to campaigners, who for years have targeted the project saying that the government should ask for a reallocation of the loans for better use, such as the coronavirus response effort.

“I’m sure the World Bank would welcome the government’s request [to reallocate the funds] from existing projects such as the Bisri Dam which are not happening,” coordinator of the Save the Bisri Valley campaign, Roland Nassour, told Middle East Eye.

Just earlier this month, the Lebanese government had requested to reallocate some of the World Bank funding, moving $40m from the country’s Health Resilience Project to its Covid-19 response effort. Ironically, this happened almost at the same time Lebanon’s cabinet officially ratified the Bisri Dam project.

But politicians have warned of dangerous consequences if the Bisri Dam project were to be cancelled altogether.

Energy Minister Raymond Ghajar said scrapping the project would place further immediate financial burdens on the cash-strapped Lebanese state, given that half of the loan from the World Bank was already paid, making the Lebanese government liable.

President Michel Aoun took to Twitter to criticise the opponents of the “vital project”, saying “those who reject it will face a great responsibility” for their action.

The ongoing protests from campaigners have succeeded in persuading a number of municipalities in the area to withdraw their support for the dam.

“We originally weren’t opposed, because it was a national project. But the environmentalists have shed light on a lot of issues that many people were not aware of,” Mazraat el-Chouf mayor, Yehya Abou Karoom, told MEE.

'The campaign is a 'clear reflection' of a popular slogan of the Lebanese uprising, killion ya’ane killon (all of them means all of them)'

- Roland Nassour, coordinator of the Save the Bisri Valley campaign

Mazraat el-Chouf is one of four municipalities in Chouf district with land in the valley that have withdrawn their support for the project.

Abou Karoom said that out of the five-million-square metre land appropriated for the dam, 25 percent belongs to his municipality.

Together with lands belonging to Ammatour, Beter, and Bsaba municipalities, that’s a total of “60-65 percent” of the project site that no longer supports it, he said.

Nassour said the mayors’ decision was crucial and ultimately symbolic.

“This makes things clear that the local community and administration oppose the project,” Nassour told MEE, adding that he has heard from “reliable sources” close to the World Bank that the project truly is on its last legs.

“If the project is aborted, the loans can be used elsewhere to serve the interests of the Lebanese people,” he said. “Although some would prefer that we had refused [the World Bank loans] in the first place.”

When approached by MEE, the World Bank did not comment on the withdrawal of the four municipalities from the Birsi Dam project.

When the World Bank approved the financing of the Bisri Dam back in 2014, it allocated funds for a loan of around $617m. However over the years, economists and even some Lebanese MPs have warned that the project costs could amount to at least $1.2bn in its early stages.

Environmentalists and other activists, like Nassour – currently a graduate student at the American University of Beirut - have since been campaigning against the plan, citing its economic and social damage to farmers, its impact on Lebanese biodiversity, and safety concerns considering the dam would be built on a fault line.

Ever since, campaigners and the World Bank have been in a tug of war of narratives surrounding the project.

The Save Bisri Valley campaign was launched in 2017 to disseminate online petitions, hold protests, and organise walking tours across the valley to showcase to citizens the region’s unique biodiversity, historical sites like the Mar Moussa Church, and the remains of a Roman temple.

But the campaign did not make national headlines until October 2019, when a popular movement kicked off in Lebanon, seeking the removal of an entire political class, which is blamed for state corruption and misrule that led to the worst financial crisis since its 15-year civil war.

According to Nassour, the campaign is a “clear reflection” of a popular slogan of the Lebanese uprising, killion ya’ane killon (all of them means all of them), as it is also concerned about the economic and social problems in the country.

“This project is the epitome of sectarian power and profit-sharing – and the power of large corporations and their affiliations with political parties,” he said.

During the uprising, protestors from around the country camped for about a month in the Bisri valley to halt dam construction efforts.

Protests have since continued, although they are now far more sporadic especially due to the coronavirus pandemic.

Earlier this week, members of independent political party Li Haqqi, which was founded in the mountainous district, stormed the construction site and tied themselves to pine trees while wearing masks and gloves in light of the virus outbreak, calling for the end of the project.

Now, almost six years after the World Bank allocated loan for the project, construction has come to a halt.

Politics has played a role in his decision to withdraw support for the Bisri project, admitted Abou Karoum.

The mayor of Mazraat el-Chouf, along with leaders of the other municipalities that have withdrawn their support for the dam, all belong to the Progressive Socialist Party (PSP) headed by Druze political leader, Walid Jumblatt.

“The PSP’s position changed and has since called for the establishment of a nature reservation [in the valley instead of the dam],” Abou Karoum said.

Furthermore, the funds allocated to compensate the farmers who would lose their land was inadequate, he added.

“The Council for Development and Reconstruction told us that the money simply wasn’t there for what we'd consider a fair compensation; it was truly an insult.”

The Chouf region is a key political stronghold for Jumblatt and the party, and his opponents have speculated that withering ties with the Free Patriotic Movement (FPM) is the reason behind the party’s new direction.

FPM leader Gebran Bassil, then energy minister in 2010, set up a strategy for the country’s water sector. It included the construction of some 14 dams, including the Bisri Dam, and was approved by the cabinet in 2012.

Marie-Rose Rahme, head of the environmental committee at Li Haqqi, welcomed the decision by the Jumblatt-backed municipalities but said she wished that their withdrawal had been made before construction began.

“Perhaps this was a political decision,” Rahme told MEE. “But regardless of the reason for this decision, we hope the rest of the municipalities will follow suit.”

Does Lebanon give a dam?

Faced with the adverse economic impacts of the global Covid-19 outbreak, already cash-strapped Lebanon is now dealing with one of the worst fiscal crises in its short history.

The government has been scrambling to unlock some $11.1bn in pledged loans from the international community back in April 2018, almost half of the pledged funding came from the World Bank.

Economist Jad Chaaban describes the fiasco as an embodiment of the major problems that Lebanon was facing: corruption, and wasteful spending with little to no returns for the public.

The American University of Beirut professor also told MEE that regardless of the government’s reasons, the whole project would not be feasible anyway due to anticipated environmental costs.

Chaaban compared Bisri to another dam project northeast of Beirut, which is two-thirds smaller in scale.

“For Janne [Dam], the environmental degradation [cost] was said to be around $100 million per year… but for Bisri Dam the study said it would be $148,000,” Chaaban said, suggesting this was not a credible figure.

Chaaban, like Rahme, Nassour, and even Mayor Abou Karoum, has called for alternative ways to supply water, including by improving the country’s weak sewage treatment system and using groundwater.

“The $1.2 billion [cost] will increase – it’s already an overpriced project,” said Chaaban, whose “conservative estimate” anticipates the project to cost a total of $5bn down the line.

“You can probably fix the whole government with five billion.” Lebanon Protests
'Mistakes of the past': Lebanon PM says country must default on its debt