Libyan footballers, Sicilian fishermen and their quest for freedom

Families of detained Sicilian fishermen call for their release from Libya, while in Benghazi, families urge Italy to review the case of their sons held in its prisons 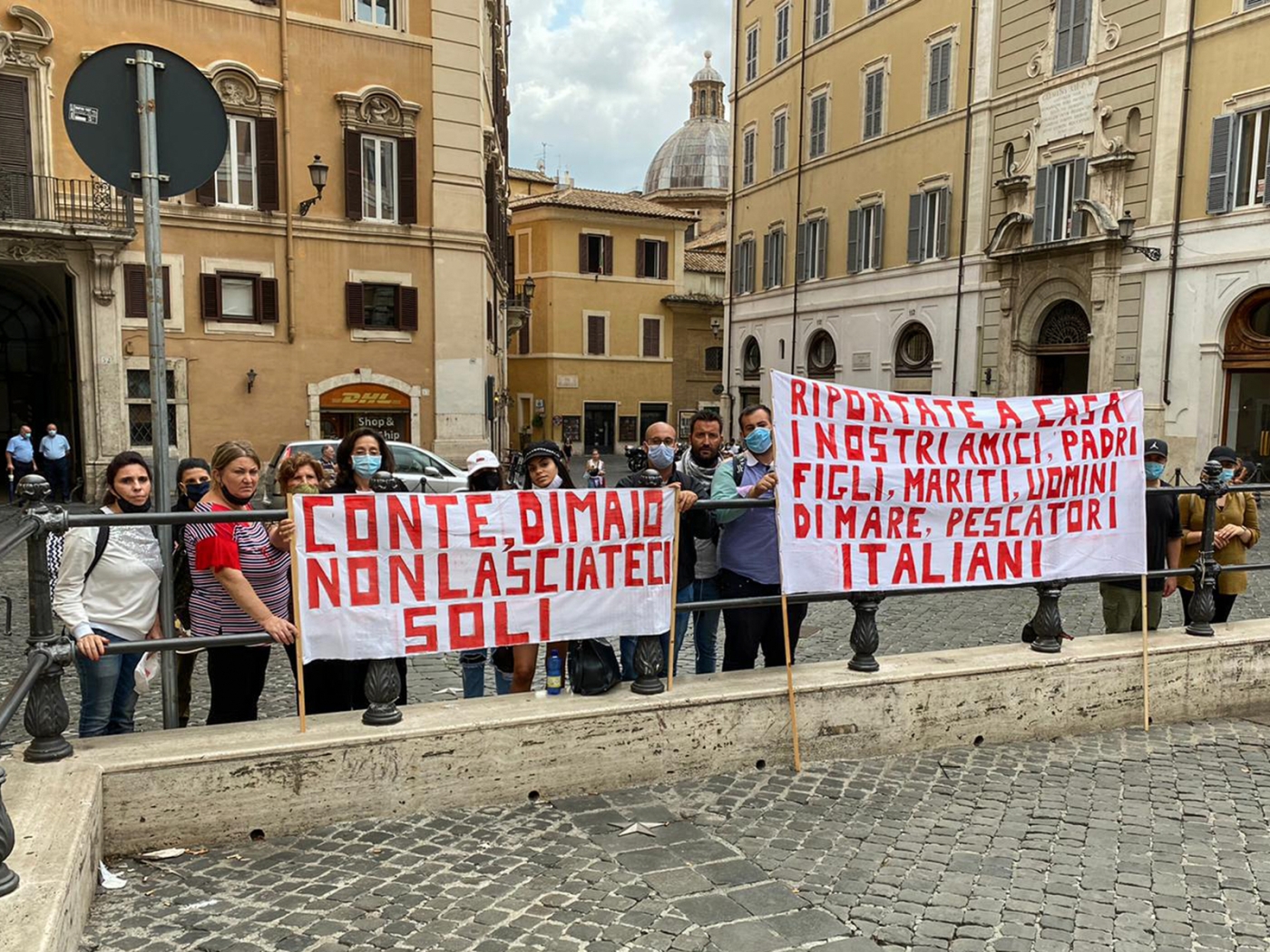 Separated by the Mediterranean and some 766km, people in Benghazi and Sicily have found themselves on two sides of the same coin.

Family members on both coasts of the Mediterranean are demanding the freedom of their loved ones held by the authorities of the other side, in a quest that has become tangled with politics between Libya and Italy.

"When the civil war erupted in Libya [in 2014], our footballers had to stop their training and start thinking about leaving Libya for a better country where they could follow their ambitions," said Ibtisam Faraj, the aunt of one of four Libyan footballers held in an Italian prison.

Her nephew, Alaa Faraj, known to Italian authorities as Abdel-Karim Hamad Faraj, was only 20 when he left Libya on a wooden boat towards Europe, along with his friends Joma Tarek Laamami, Abdel Rahman al-Monsif and Mohannad Nuri.

All four played for Libyan clubs before the civil war, according to their relatives and friends.

"A friend of theirs managed to reach Germany in one week, so they tried to do the same. Their only goal was to play football in Europe," Ibtisam Faraj, a doctor, told MEE on a WhatsApp call from the city of Benghazi in northeastern Libya.

The four Libyans travelled with more than 350 asylum seekers from different African countries. Around 49 of them died during the sea journey and some survivors pointed at the football players and two Moroccan citizens as the traffickers.

It was 15 August 2015, known in Italy as "the Ferragosto Shipwreck," named after the festival falling on the same day. The overcrowded vessel was intercepted by the Italian navy, which transferred the survivors to a Norwegian ship that ferried them to Sicily.

Today, Alaa and his friends are serving a sentence of 30 years in prison on a conviction of human trafficking, but their family members believe their sons are innocent.

"They paid the journey to Italy to the real traffickers as the other passengers did, they were not responsible for the death of the people on the boat, for whom we are very sorry," Ibtisam Faraj said.

For the past five years, while their sons have been in prison in Italy, the Libyan families have protested several times at the port of Benghazi, asking for the footballers to be freed.

Their voices went unheard until September 2020, when something else happened on the other side of the sea.

In front of the Italian parliament, some Sicilians and Tunisians have started protesting every day.

They too are calling for the release of their own family members, but this time from prisons in Libya.

"We will not leave Rome until our fathers, sons and friends are brought back from Libya to Italy," said Naoires Ben Haddad, a 22-year-old trainee and daughter of one of the captured fishermen.

On 1 September, the fishing boats Artemide and Medinea, from Mazara del Vallo in Sicily, were seized by Libyan patrol boats. Both fishermen and crew were arrested in international waters, 35 nautical miles north of Benghazi.

According to international law, foreign ships are prohibited from fishing activity within 12 nautical miles of any country’s territorial waters. 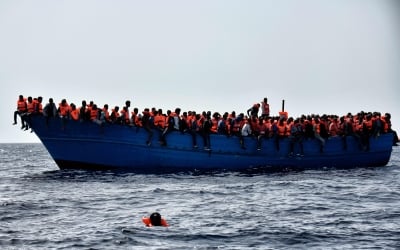 However, Libyan authorities unilaterally extended the country's territorial waters to 74 miles in 2005, rendering the Artemide and Medinea's fishing activities illegal.

Complicating matters further, relatives say the Libyan marines have accused the fishermen of drug trafficking. Among the 18 people arrested on the boats, 10 are Italian, six are Tunisian and two are Indonesian.

"My father arrived in Italy from Tunisia 43 years ago and has worked as a sailor for the past 22 years," Naoires said, remembering the day she greeted her father for the last time before he was detained, at the end of August.

"The one time we were able to talk to them, we could hear some Libyan guards next to them saying: 'Tell them that you are fine,'" she said.

"We know that the prison conditions in Libya are not good, and we are very worried for them."

Among the protesters in Rome is 73-year-old Rosetta Ingargiola - the mother of the boat's captain, Pietro Marrone, 46.

"On the phone, we could not say how they really are. We are waiting here for the Italian parliament to let us know if any negotiations will start," she said.

According to the Italian and Tunisian family members, no formal accusations have been made against the 18 detainees.

The crisis unit of the Italian Ministry of Foreign Affairs has met the fishermen's family members and has confirmed to MEE that they have been working on the case since the very beginning and aim to reach a positive solution as soon as possible.

While protests by the fishermen's relatives began this September in Rome, in Benghazi, Alaa's younger brother, Sayf al-Islam, is incredulous that his brother has been in prison since 2015.

"We have beautiful memories together. He was always laughing, he is like a comedian," he told MEE on the phone.

"They had a contract with the football societies. They were known in the city; all the supporters love them," he said.

Due to the Covid-19 pandemic and the fear that the virus could spread in prisons, Alaa has not been able to talk to his brother as often as before.

Alaa's defence attorney in Palermo, Cinzia Pecoraro, is appealing to the Supreme Court.

"Thirty years is a very harsh sentence, especially knowing that these young guys are part of civil society and not human traffickers. There are many incongruities in the sentence," Pecoraro told MEE.

The lawyer noted that Alaa was pointed out as a trafficker because he had distributed water to fellow migrants on the boat.

"Even the Moroccan man who is accused of driving the boat admitted that the four Libyan footballers were not involved in the trafficking," she said.

When Pecoraro visited her client in prison, she was very surprised.

"It has never happened in my whole career. The guard accompanying Alaa looked at me saying: 'Please, lawyer, help this guy. He's a good guy. He's innocent.'"

Pecoraro argued to the court that the testimonies collected for this case were only taken immediately after the incident and the survivors of the crossing were never heard from again.

Back in Libya in August 2015, the traffickers forced some people on the boat to sit in the cargo hold and the Libyans were assigned to ensure that they stayed there in order to maintain the balance of the overcrowded vehicle.

The 49 people who perished were in the cargo hold, and had died from asphyxiation.

Eastern commander Khalifa Haftar, whose Libyan National Army (LNA) forces are in control of Benghazi, has proposed to the Italian authorities a prisoners' swap: the release of the fishermen in exchange for the footballers. Italian Minister of Foreign Affairs Luigi Di Maio said the proposal was unacceptable. "We respect the Italian magistrate, and we therefore ask it to review the case. Our sons had happy lives before the war," Hamed Nasser, Alaa's uncle, said.

"We would like that our voices reach the Italian people and the government and that they would consider the human side behind the footballers' decision to leave Libya illegally."

Ibtisam Faraj said that, much like the Italians who are protesting for the release of their fishermen, they too want their boys freed.

"This is an affair of states, but we only want to see them all free."

Marco Marrone, the owner of the ships from Mazara del Vallo, is in Rome protesting with the relatives of the fishermen.

"It has happened [before] that our ships would be seized by Libya and the cases would be resolved," he said, “but I don't know why this time it became a diplomatic case."

The Sicilian and Libyan families have not talked to each other, despite sharing the same demands - the return of their loved ones.

On 26 September, 500 people in the city of Mazara del Vallo marched in solidarity with the delegation of relatives in Rome.

"Instead of being honoured for their work," Naoires Ben Haddad said, "they are being kept in prison. I feel desperate not talking to them." 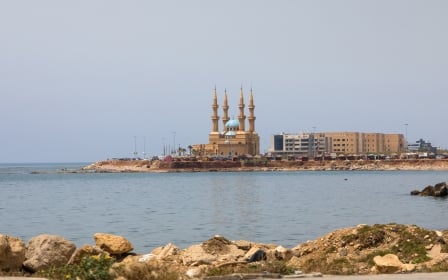