The rise of the 'Madkhalists': Inside Libya's struggle for religious supremacy 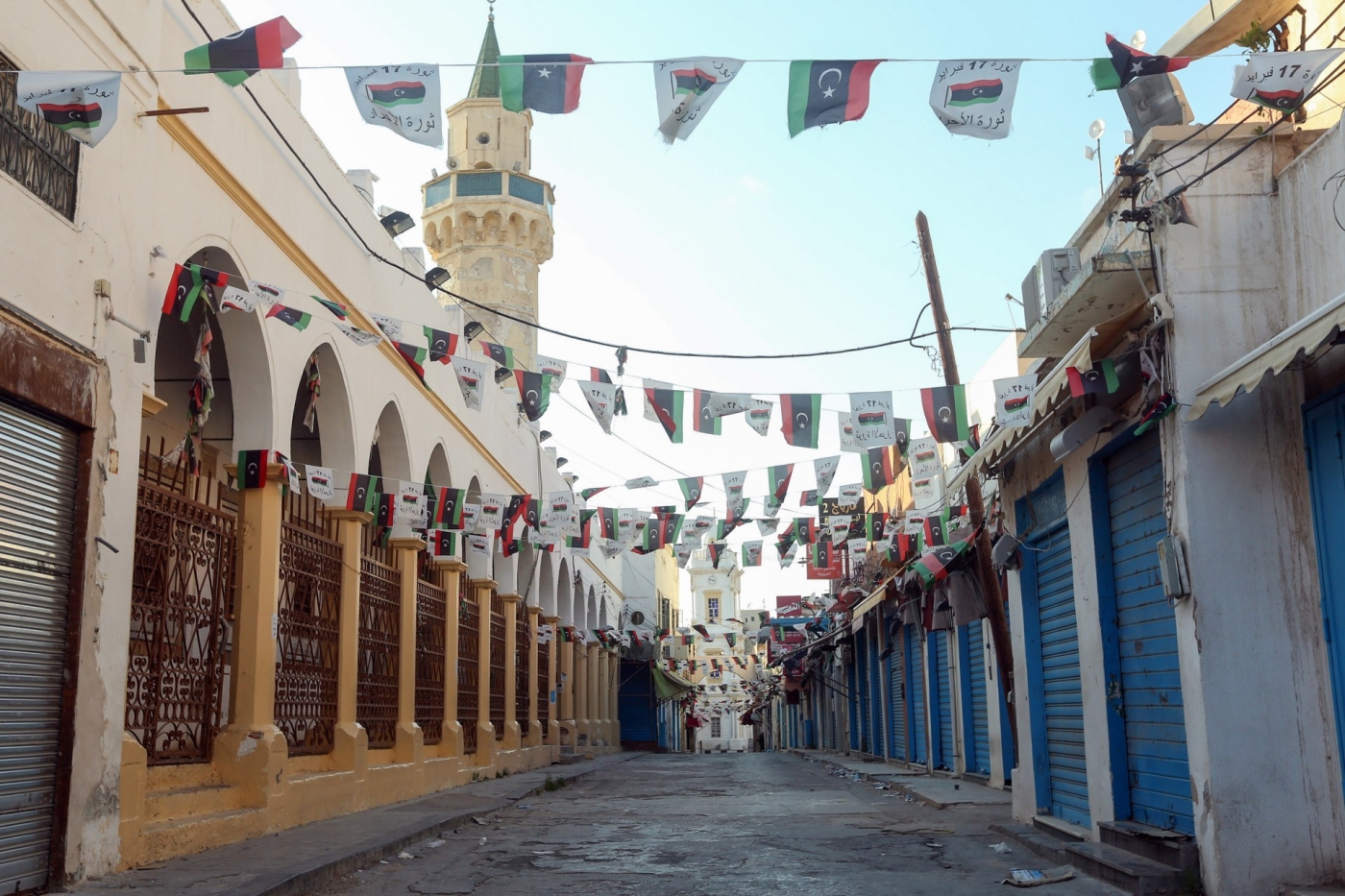 As the conflict between the self-styled Libyan National Army (LNA) and the Government of National Accord (GNA) rages on, another potentially deadly struggle is brewing in the west of Libya.

On 30 April, revolutionary elements in the city of Zawiya forced the shutdown of the local office of the GNA’s General Authority of Religious Endowments and Islamic Affairs (Awqaf). Three days later, a group in Khoms followed suit, while the day after that, the same thing occurred in nearby Zliten, as well as a number of other western towns. These closures came on the back of a television appearance by Libya’s grand mufti, Sheikh Sadiq al-Ghariani, who on 29 April delivered a blistering condemnation of the Awqaf, accusing it of being loyal to “the enemy” and following the “Al-Madkhali way”.

Ghariani was referring to the burgeoning current of Salafists who adhere to the teachings of Saudi cleric, Sheikh Rabee bin Hadi al-Madkhali, and who are labelled Madkhalists by their detractors. The mufti also charged this current with being a branch of the Saudi intelligence services.

This is not the first time Ghariani has laid into this community. He and his supporters have been locked in an ideological battle for control of Libya’s religious space against the Salafists ever since the 2011 revolution.

However, the divisions between these camps are becoming sharper, and increasingly intertwined with the larger conflict being played out between the GNA and the LNA. As these latest incidents demonstrate, this battle could become lethal.

Since the 2011 revolution, the Salafist current has been expanding across Libya, taking over mosques, opening schools and establishing media outlets.

One Zawiya resident estimates that the Salafists now control at least 80 percent of the town’s mosques. According to an official in one of the religious establishments in the capital, who like all Libyans spoken to requested anonymity for security reasons, “Salafists have complete control in some areas of Tripoli, and their sheikhs have total command over the mosques.”

Although Salafists are apolitical by nature, many young adherents of the conservative movement have joined the array of armed groups and security bodies that make up the GNA’s forces.

“They took over Misrata, they took over Tripoli, Sabratha, Zawiya, Zliten, Khoms. They spread in the security field, so you find them in criminal investigation bodies, in the [Special] Deterrent Forces, and elsewhere,” the official told MEE.

'Salafists have complete control in some areas of Tripoli, and their sheikhs have total command over the mosques'

As such, they have a presence both in the religious and the security sphere.

The growth of this ideological current, in its various strands and manifestations, has agitated other Islamists, including those associated with political Islamist groups, from the Muslim Brotherhood to more extreme trends.

Although, like the Salafist current, this political Islamist camp is by no means unified, it had sought through the revolution to overturn the old order and to direct the transition in line with its own vision and principles. It has seen its space shrink over recent years, however. Defeated and chased out of Benghazi, Derna and other eastern towns, it is now facing serious competition in the west of the country.

The GNA’s willingness to open space to Salafist-oriented forces in the capital, such as the Special Deterrence Force (RADA), which contains many Salafist elements among its ranks, has been particularly alarming to those who follow the grand mufti.

This force has arrested many Islamist elements associated with Ghariani, and is also implicated in the 2016 kidnap and killing of Sheikh Nader Omrani, a leading member of the Dar al-Ifta religious authority which the grand mufti heads.

Struggle for the Awqaf

The GNA’s decision to appoint well-known Salafist sheikh Mohamed Ahmeida al-Abbani as head of the Awqaf in November 2018 only compounded these anxieties.

Abbani replaced Abbas Ghadi, a Ghariani ally, who was forced out of the post following complaints about his handling of the Hajj pilgrimage. His appointment served as the last straw for many political Islamists and pointed to the rising power of the Salafist camp within the Tripoli milieu.

One Ghariani supporter in the capital, who is close to Dar al-Ifta, told MEE Al-Abbani’s appointment was a demonstration of how strong Salafists have become religiously and security-wise.

Following his appointment, Abbani set to work to change the colour of the official religious establishment in western Libya, replacing imams, sermon-givers, and the heads of Awqaf offices with individuals of a more Salafist orientation.

In Misrata, where the Salafist current is relatively weak, Abbani removed Sufist sheikh Ahmed al-Kout from the Awqaf, and appointed Mohamed Sassi Sharkasi, who, in the face of resistance to his appointment, took over the office by force.

In Zawiya, where the Salafist current is particularly strong, there was already a battle raging over control of the Awqaf, resulting in the authority having two offices in the town.

In May 2019, Abbani gave official recognition to the one run by the Salafist Ahmed Shedi, enraging the head of the other that was run by Abdelrazzak al-Bishti, a renowned hardliner, who accused the “Madkhalists” of having kidnapped the Awqaf.

While part of this struggle is ideological, it has other more material dimensions too, given the perks and access to financial lines associated with such posts.

As one senior civil servant in Tripoli explained: “The Awqaf has a lot of land, buildings and money. Control of the Awqaf means controlling huge financial resources. In addition, there are many lucrative positions on the boards of banks and financial institutions (such as Sharia compliance committees) for which the Awqaf is entitled to nominate candidates.”

It is little surprise then that the political Islamist trend has found Abbani’s appointment difficult to stomach, and has pushed hard for his removal. The National Gathering of Ulema and Sheikhs of Libya, for example, which is close to the mufti, has demanded repeatedly that the GNA replace Abbani.

Meanwhile, Ghariani has been at pains to stress his adherence to the Maliki school of jurisprudence, which is traditionally followed in North Africa, thereby presenting himself as defender of Libyan interests against “imported ideologies” followed by the official Awqaf.

An official close to the Dar al-Ifta took a similar line, claiming: “People in Zawiya, Khoms, Zliten and elsewhere were delighted when the al-Maliki school took over the Awqaf and the Madkhalists were kicked out.”

However, it was the string of GNA victories over a number of LNA-held towns in western Libya in April 2020 that galvanised revolutionary elements into taking Ghariani’s statement as their cue to forcibly shut down the Awqaf offices in their towns.

The GNA’s triumph over Sabratha and Surman, which were controlled by Salafist forces allied to the LNA that fled when GNA forces attacked, emboldened these elements. Buoyed up by victory, they determined to reassert control over their local Awqaf offices in the name of rejecting “alien currents”.

Yet, despite the reference to ideology, this Awqaf takeover was as much about politics as anything else.

The Salafists present a worrying prospect for the political Islamist camp. Along with the eastern tribes, Salafist brigades form a core component of the LNA’s forces, and their support has been critical in enabling LNA commander Khalifa Hafter to wipe out his Islamist opponents in the east.

Through this relationship, Salafists have been able to dominate the religious space in the east, where they control religious institutions and establishments, and are able to impose their interpretation of Islam.

Salafists have also proved instrumental in enabling Haftar to take over towns held by his opponents. It was the Salafist-dominated Infantry Brigade 604 that opened the way for the LNA to seize the strategic central Libyan city of Sirte in January 2020.

'Haftar is expanding into our area in two ways: through Saudi money and the Madkhalists'

This brigade, formed mainly of local Salafist elements from Sirte, had once fought alongside GNA-aligned forces from Misrata in their battle against the Islamic State group (IS) in the city. Once IS was defeated, it worked with other GNA-allied forces to secure Sirte. When Haftar’s forces advanced, it switched sides, enabling the LNA to enter with barely any struggle.

As such, many political Islamists in the west fear that the Salafists are a fifth column waiting to deliver the region to Haftar when the moment presents itself.

“Haftar is expanding into our area in two ways: through Saudi money and the Madkhalists,” claimed one official who is close to Ghariani.

“Haftar’s forces are made up of tribes, criminals and Madkhalists. The latter are the most dangerous because of the power of their ideology.”

In May, Bishti accused the Salafists in Zawiya of sowing division for “siding with the criminal Haftar”. Those who shut down the Khoms Awqaf, meanwhile, accused the GNA’s appointee of supporting the enemy, proclaiming their rejection of “alien currents” that conspired against the country.

Despite these accusations, so far few Salafist groups in the west have shown any real inclination to rally behind the LNA.

Although certain individuals, such as prominent Zintani Salafist Sheikh Tariq Darman, have openly expressed their backing for Haftar, most have remained either pro-GNA or neutral.

Abbani is clear in his support for the GNA, declaring in a recent statement that the Awqaf had issued repeated directives stressing the GNA’s status as the current legitimate authority in the country.

He also accused Ghariani of falsely “equating those Salafists who are loyal to Haftar and fighting with him with the youth of Tripoli and employees of the Awqaf and its offices”.

Meanwhile, those who were kicked out of the Awqaf in Zliten asserted: “We are neutral and we are at one distance from all religious orientations.”

This doesn’t mean that there aren’t Salafist groups in the west of Libya who would prefer to see Haftar at the helm.

“Certain Salafists in Zawiya say privately that they would prefer Haftar to the militias who are running their towns and using the mosques as platforms to call for jihad against the LNA,” one Libyan commentator from Zawiya, who is close to the Salafists, told MEE.

This does not mean that these groups are ready to throw in their lot with Haftar, but should LNA forces take over, they may not object.

However, the political Islamist camp’s habit of lumping their religious opponents together under the Madkhalist label and accusing them of serving as a Trojan horse for the LNA is a dangerous game. Indeed, this growing conflict spells serious trouble for Libya and risks enflaming tensions further.

Many towns in western Libya are split between these two ideological currents, and there is a danger that this struggle could escalate from a war of words and control for religious space into something more violent.

There is already growing agitation in Misrata, where on 17 May, a group referring to itself as the Sheikhs and Notables of Misrata accused Abbani of marginalising Ahl al-Sunna (the people of the Sunna), and demanded that he be handed over for investigation for spreading hatred.

This kind of agitation could also spread to the capital, where both camps have armed groups. Although still a sideshow to the main battle that is taking place between Haftar and the GNA, this struggle for religious supremacy could well intensify, creating yet more fault lines in Libya’s  already fragmented landscape.