'Withdraw or prepare coffins': Thousands protest in Iraq against US troop presence 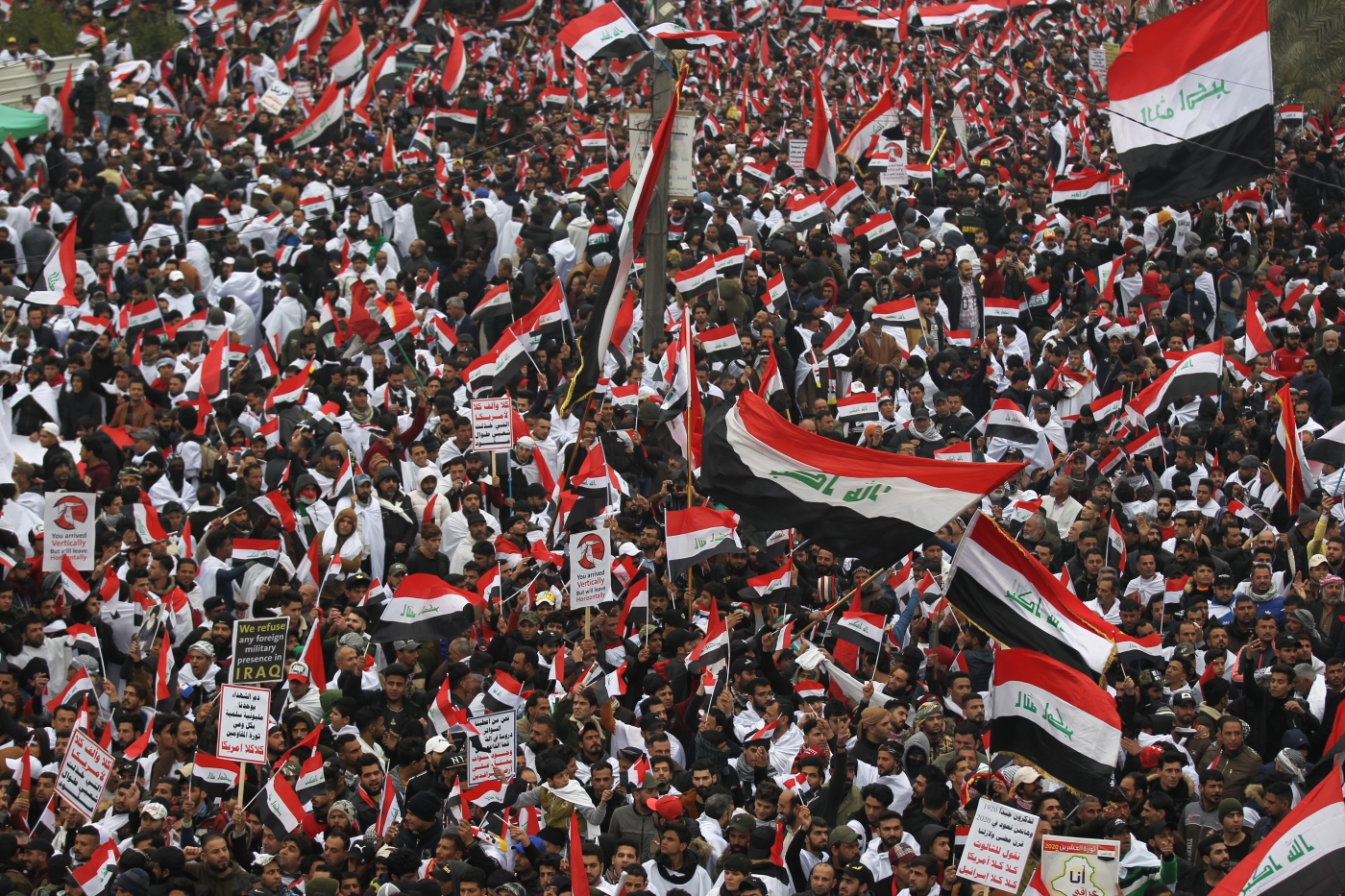 Tens of thousands of Iraqis have taken to the streets on Friday to demand the removal US troops following a call from influential Shia cleric Muqtada al-Sadr for a "million-strong" march.

Protesters chanted "get out, get out, occupier" as they massed in the Jadiriyah district of east Baghdad, in the wake of American air strikes earlier this month that killed a militia leader and top Iranian general Qassem Soleimani.

Some chanted "Death to America," while the Iraqi flag was widely flown.

Sadr had originally called for the march to show Iraqi opposition to the US presence in the country, capitalising on anger felt following the US air strike near Baghdad airport that killed Soleimani, Iraqi militia leader Abu Mahdi al-Muhandis, and several others.

Around 5,200 US troops are still in Iraq as part of a coalition fighting the Islamic State group. The troops are in Iraq at the invitation of the government, which says that the strike on Soleimani has undermined their informal agreement.

Iraq's parliament voted earlier this month to support the removal of all US forces from Iraq in the wake of the deadly strikes, although the US has refused to discuss withdrawing its forces with Iraq's acting prime minister, Adel Abdul Mahdi.

During the protest, a statement from Sadr, who is studying in the Iranian city of Qom, was read by a representative, calling for all foreign forces to leave Iraq, for Iraq's security agreements with the United States to be cancelled and the closure of Iraqi airspace to US military and surveillance aircraft.

'Hard revenge - you arrived vertically, but will leave horizontally'

"If all this is implemented, we will deal with it as a non-occupying country - otherwise it will be considered a country hostile to Iraq," said the statement.

Some carried a placard which read "Hard revenge - you arrived vertically, but will leave horizontally" in reference to Iranian Supreme Leader Ali Khamenei's threat of "hard revenge" for Suleimani's killing.

Another placard called on the US to bring its troops home or "prepare their coffins".

The protest began to wind down less than two hours after it began, though some people remained.

Friday's demonstration was greeted with ambivalence and even outright antipathy by supporters of the months' long anti-government protest movement that has its hub in Tahrir Square in the centre of Baghdad.

"We are not participating in tomorrow's one million-strong protests that were called by the Sadr movement," said Ali Khrypt, speaking to Middle East Eye on Thursday. "We started to protest on 1 October 2019 to demand Iraq's sovereignty, and we urge people to come and join us in Tahrir Square to achieve this.

"Why call now for sovereignty while we have been calling for it since October? Sadrists, of course, participated with us in Tahrir Square on 25 October, while [Sadr] kept doing visits to Iran."

Some have been concerned by the support for the protests by Iran-backed militia leaders such as Qais al-Khazali, who tweeted "to Trump, the fool" that the "people's message of rejection was clear: if you don't leave voluntarily, you'll be ousted despite yourself".

Iran has been seen by many protesters as responsible for the harsh crackdown that has taken place since the beginning of anti-government demonstrations in early October.

On Thursday, Amnesty International reported that more than 600 people have so far been killed by the security forces in the past four months, largely through a mixture of live ammunition and heavy tear gas grenades, which have often been aimed at protesters' heads.

Soleimani had been reported as masterminding the brutal crackdown, while Iran-backed groups have repeatedly accused demonstrators of being Israeli agents and have themselves been accused of taking part in repressing the protests.

"Some of those parties involved in tomorrow's protests have also kidnapped, tortured and killed peaceful protesters," said Ruba al-Hassani, a socio-legal academic at Osgoode Hall Law School in Toronto, speaking to MEE prior to the protest.

"They have set up snipers on rooftops to take out protesters, have targeted prominent activists, and lately, have armed gunmen in plainclothes shooting at protesters in drive-bys."

Iraq's top Shia authority, Grand Ayatollah Ali Sistani, did not explicitly back the rally in his weekly sermon on Friday but said Iraqis had a right to protest "peacefully" in support of their country's sovereignty.

The sermon, read by a representative, said parties were "very late" in forming a new government to replace the cabinet of premier Mahdi.

"The formation of the Iraqi government is long overdue and has grossly surpassed the constitutional limit. Thus it is necessary for the parties and blocs to resolve this issue according to the previously discussed means," said the representative. 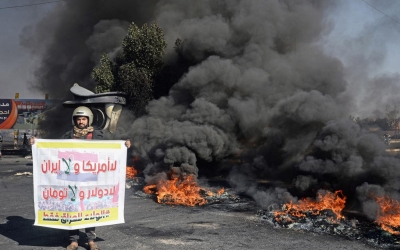 Abdul Mahdi has acted in a caretaker role since resigning in December, as the anti-governments protests reached a fever pitch.

They were soon overshadowed by spiralling US-Iran tensions and protesters had feared the movement being totally eclipsed by Sadr's rival rally.

There had also been worries Sadr's supporters might attack the protest camp in Baghdad's Tahrir Square, the presidential palace or the high-security Green Zone, home to the US embassy and other foreign missions.

The move would not be without precedent for Sadr, who urged followers to storm the Green Zone in 2016 in a challenge to the government over undelivered reforms.

But there were no attempts on Friday morning to breach government zones or head to Tahrir.

Sadr, 46, battled US forces at the head of his Mahdi Army militia after the 2003 US-led invasion, but he is a fickle politician, notorious for switching alliances quickly.

He backed anti-government protests when they erupted in October, but he also controls parliament's largest bloc and his followers hold top ministerial positions.

His spokesman, Saleh al-Obeidy, hinted that while others unequivocally blamed either the United States or Iran for Iraq's instability, Sadr would choose a middle path. 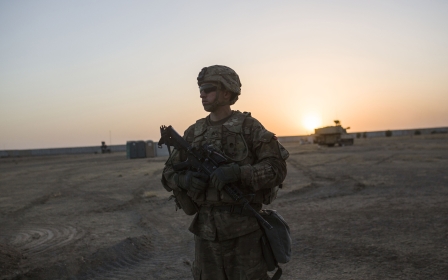 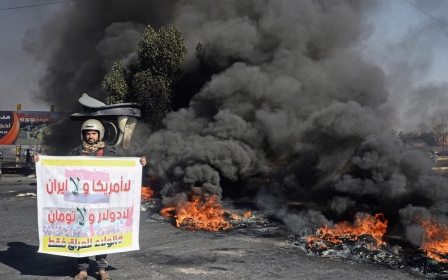 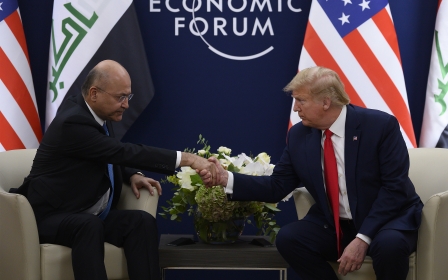