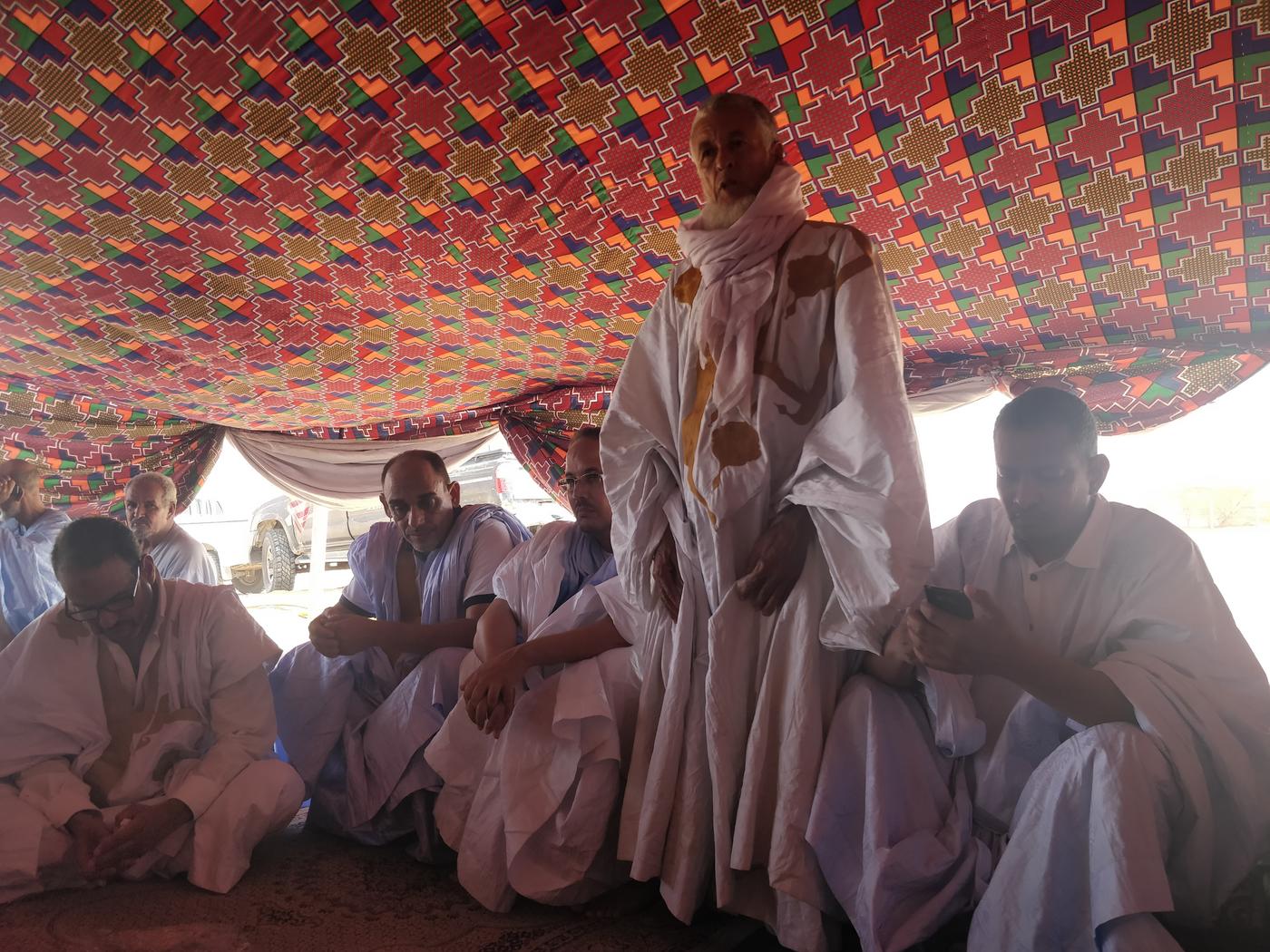 A tent flutters in the hot wind, an oasis of colour in the barren Sahara Desert.

It plays host to a meeting of men drawn from Mauritania’s elite Arab-Berbers.

They recline on red cushions in wide-sleeved robes. Later, they tear into a shank of lamb as part of this majlis - a type of gathering that is a time-honoured desert tradition.

The muffled chatter in the village of Aqba, 35km from the Mauritanian capital of Nouakchott, soon turns to politics. Those gathered take turns to stand up and praise the man they hope will lead the country come Saturday’s election. A ripple of applause follows.

Their man, former Defence Minister Mohamed Ould Ghazouani is widely expected to win in the first round.

Reportedly handpicked by the incumbent president, Ould Abdel Aziz, people here believe he will keep militants at bay and help to build the economy.

With just over four million people, the Saharan country has a population that is half that of London’s but spread across a sparse landscape twice the size of France.

Straddling Black and Arab Africa, it is the perfect staging post for attacks by militants, who often speak a related variant of the local Arabic.

Through a policy of carrot and stick, Abdel Aziz is widely credited with extinguishing a ferocious al-Qaeda insurgency that has since afflicted other parts of West Africa, including neighbouring Mali.

“We have many problems here in Mauritania, but the security is a major one,” said Malainine Saad, a 50 year-old English teacher who wears a traditional white boubou with a neckline embroidered in a pale gold thread.

“During the Abdel Aziz era, al-Qaeda never made an attack here. We think Ghazouani can continue the process to avoid al-Qaeda.”

Security has been an important factor in the recent steady growth of Mauritania’s economy, which relies heavily on mining and fishing. But the country remains one of the world’s poorest, ranking 159 out of 189 countries in the UN’s Human Development Index, and there have been repeated accusations of corruption. A Ghazouani win would make this the first peaceful transition of power in the history of Mauritania, a country where the military has had the final say since 1978, when independence leader Moktar Ould Daddah was deposed after a failed war against Western Sahara’s Polisario Front.

Nine more coups or coup attempts have followed, the last of which in 2008 brought Abdel Aziz himself to power with the help of Ghazouani, who was then appointed army chief.

Abdel Aziz then ran for president in 2009 and won in elections decried by the opposition as an “electoral coup” but which were deemed satisfactory by African Union observers. Success followed again in 2014 in an election boycotted by opposition groups.

Large metal trays crammed with fizzy drinks sit on a floor of ornate carpets. A bucket of of ice melts and is quickly replaced.

A man laid low by the Sahara heat slowly gets up from a red sofa and begins to speak.

“I learnt from Ghazouani, worked with him and fought with him for 17 years,” he announced.

He gives his name as Mustapha Muhammad Lamine, 51, a retired army officer. Deep creases line his face, but his toothy grin betrays a youthful glow.

“In a previous time the army was in power and it was very strong. But we need to have a civil government in order to progress. We must have a government that is accepted by the military and by civil society too," he said.

“Among his qualities are a strong national feeling, he is a wise man, he sees things as they are, he's a Mauritanian.”

Like most here, Ghazouani is Arab-Berber. For the most part, their Mauritania is one of Islamic custom, ancient lineage and a love of the desert.

“At heart we are bedu," one man tells me, using the word for desert-dweller in the local Arabic dialect.

While this group has dominated the country since it won independence from France in 1960, it makes up just 30 percent of the country’s population.

Some 25 percent belong to various Black African tribes also found in neighbouring Senegal. But the largest group are the Harratin, who are a legacy of the enslavement of Black Africans by the dominant Arab-berbers. They number 40 percent.

More often than not their Mauritania is one of illiteracy, discrimination and slum dwellings - and sometimes even enslavement.

While Mauritania officially banned slavery In 1981, campaigners estimate that 90,000 are forced to do work with no pay and can be readily bought and sold.

It’s a controversial topic here and many, including politicians, deny that it exists.

I asked about Biram Dah Abeid, a presidential contender born to parents who were once slaves and who promises to abolish the system once and for all.

“He pretends to create an emancipation movement to free slaves but we don't have slaves here,” said Saad, the teacher. “But we do have poor people.”

“Biram uses racial speech, and it’s not good for the country,” he added, pointing out that successive governments have largely failed them.

Local rights groups have also decried the imprisonment of Biram and other anti-slavery activists under Abdel Aziz, who has also taken a hard line against political opponents, including Tawassul, the main Muslim Brotherhood offshoot, by shutting down its charities and schools.

Siding with Saudi Arabia and the UAE in their ongoing Gulf dispute with Qatar, which is considered sympathetic to the Brotherhood, Abdel Aziz said last year about Tawassul, who are the main opposition party: “Islamists, who practise politics and wear ties, can take up arms if they cannot achieve their goals via politics.”

Ahmed Muhammad, election coordinator in the region of Aouleiygatt for the Union of the Republic, Ghazouani’s political party, which was founded by Abdel Aziz, said “the most important thing is security”.

“It’s a difficult time for the country. In the north of Mali, there is al-Qaeda and you need stability and security,” Muhammad said.

He wears a boubou whose white fabric is bunched up in heavy folds on his shoulders, revealing a striped polo shirt underneath.

Ghazouani is widely viewed as the continuity candidate. More of the same. Calming the ethnic and political divisions isn’t high on the list of priorities, but political stability is.

“Having another president is a big step on its own,” Muhammad said.