Saudi Arabia and Pakistan signed a raft of investment deals on Sunday worth as much as $20bn for the cash-strapped South Asian country.

Seven agreements and Memorandums of Understanding were inked as Saudi crown prince Mohammed bin Salman launched his diplomatic trip to Asia in Islamabad, with Pakistan hoping the deals will provide welcome relief to its teetering economy.

Bin Salman's trip, which was delayed by a day, will also see him travel to India and China and has been described as an attempt to seek allies after the killing of Saudi journalist and critic Jamal Khashoggi inside the Saudi consulate in Istanbul in October.

He "wants to demonstrate that he is not an international pariah," said James M Dorsey, a researcher at the S Rajaratnam School of International Studies in Singapore.

It is a matter of proving that he still has "international access and he can function ... as the most senior representative of Saudi Arabia beyond the king".

Khan justified his trip in October, which went ahead even as bin Salman was being accused of ordering the Khashoggi killing, by arguing that Pakistan had no choice but to maintain its relationship because of its economic difficulties.

Bin Salman's return visit has come at a sensitive time for Pakistan. Different militant groups based on its territory have recently carried out cross-border attacks that killed 27 soldiers in Iran and 44 Indian soldiers in Indian-held Kashmir.

Pakistani newspaper Dawn reported that security has been tightened, with 1,000 new checkpoints set up around the capital Islamabad and the adjoining garrison city of Rawalpindi.

The newspaper reported that several of the expected agreements will focus on the creation of an oil refinery and energy production. 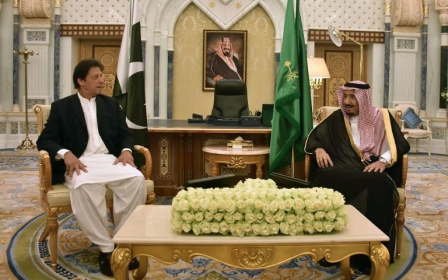