'Withdrawing US forces from Syria is a grave strategic mistake,' McConnell writes in op-ed
By
MEE and agencies

US Senate Majority Leader Mitch McConnell attacked President Donald Trump's decision to pull troops from Syria as "a strategic nightmare" that will help Washington's foes and hurt its allies.

"Withdrawing US forces from Syria is a grave strategic mistake," McConnell, the top Republican in Congress, wrote in an op-ed published on Friday afternoon in the Washington Post.

"It will leave the American people and homeland less safe, embolden our enemies, and weaken important alliances."

His comments come after Trump on Wednesday defended his decision to pull US troops out of Syria as "strategically brilliant".

McConnell, usually a staunch supporter of the president, had earlier in the month condemned Trump's withdrawal of troops from northeast Syria, which sparked a week-long Turkish offensive against the Kurds, who were allied with the US in the fight against the Islamic State (IS) group, AFP reported.

"The combination of a US pullback and the escalating Turkish-Kurdish hostilities is creating a strategic nightmare for our country," McConnell wrote in his opinion piece.

"Even if the five-day ceasefire announced Thursday holds, events of the past week have set back the United States' campaign against the Islamic State and other terrorists," he said. 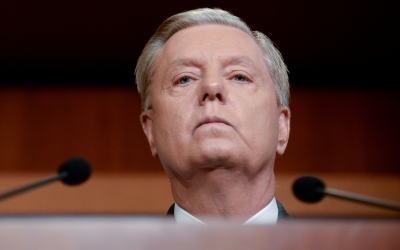 Another key Trump ally, Republican Senator Lindsey Graham, said earlier this week that he would continue to push a bill to impose heavy sanctions against Turkey over its military operation in northern Syria despite the agreement between Washington and Ankara to suspend the Turkish incursion, a spokesperson confirmed to MEE.

Surrounded by senators from both major parties, Graham announced the sanctions bill on Thursday as Pence was meeting with Turkey's President Recep Tayyip Erdogan.

In McConnell’s op-ed, he did not mention Trump by name, though he did liken the Syria withdrawal to the foreign policy of Trump's Democratic predecessor Barack Obama.

"We saw the Islamic State flourish in Iraq after President Barack Obama's retreat. We will see these things anew in Syria and Afghanistan if we abandon our partners and retreat from these conflicts before they are won," McConnell wrote.

"America's wars will be 'endless' only if America refuses to win them," he added in an apparent jab at Trump's insistence that the withdrawal was necessary "to get out of these ridiculous Endless Wars."

The offensive has killed more than 500 people, including dozens of civilians, while some 300,000 civilians have been displaced within Syria, according to the Syrian Observatory for Human Rights war monitor.

Turkey agreed to suspend its offensive for five days in northern Syria while Kurdish fighters withdraw from the area, following the talks with Pence in Ankara.