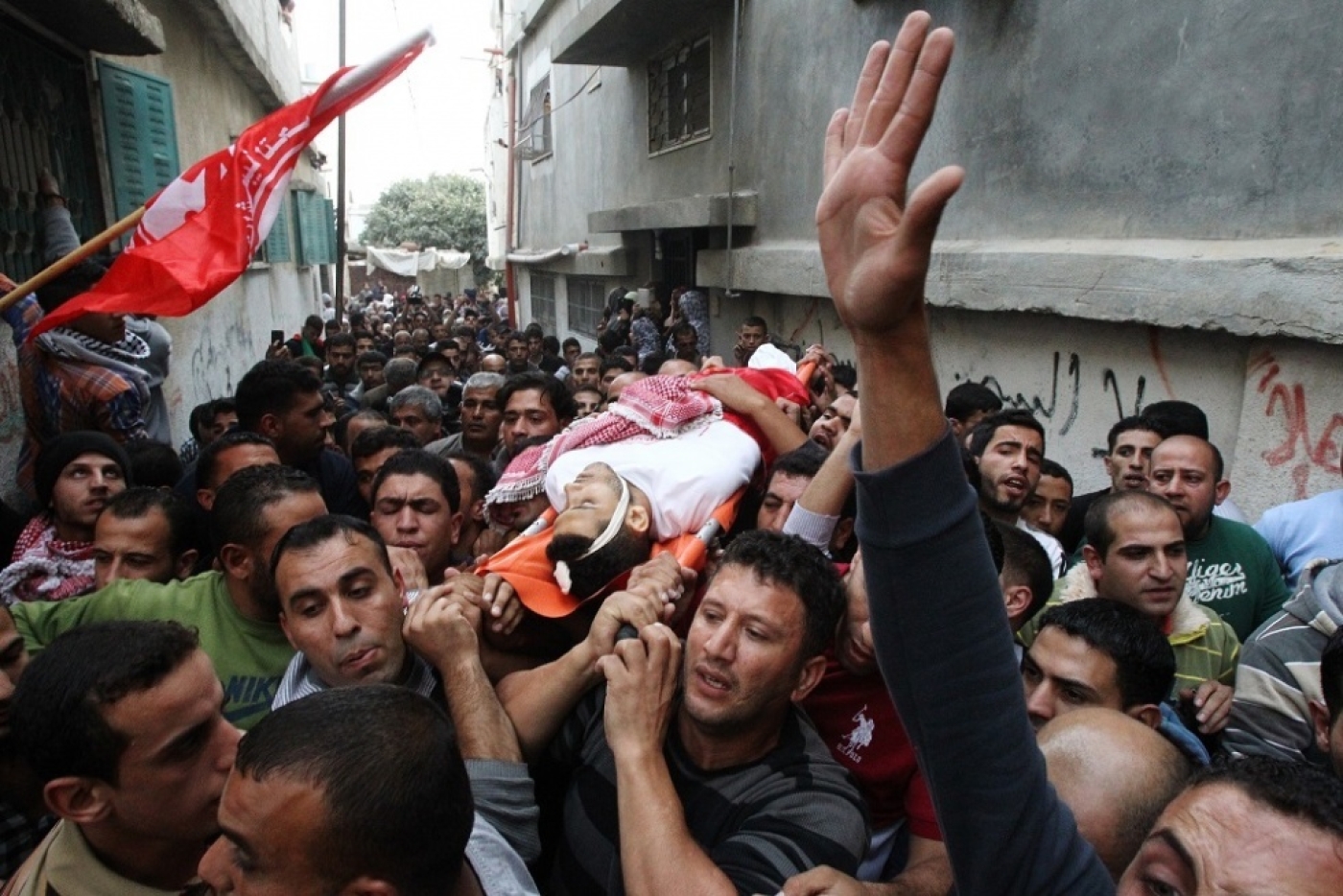 A 22-year-old Palestinian was shot dead on Tuesday during clashes with the Israeli army in the al-Arroub refugee camp north of Hebron.

Muhammad Iwad Jawabreh died after being hit in the chest by bullets during clashes between around 150 Palestinians and Israeli soldiers on Route 60, the main north-south road.

An Israeli spokeswoman said the Palestinians were throwing rocks and Molotov cocktails at passing vehicles. Israeli forces tried to break up the group, eventually firing at the protesters' lower bodies when Jawabreh was hit.

News of Jawabreh's death comes as the Israeli army said it will deploy another two battalions to the West Bank in light of violent incidents in the past month.

The additional troops will be put on operational duty and will focus on protecting those traveling roads in the West Bank, the Israeli daily Haaretz reported.

Monday's violence began in Tel Aviv, where a Palestinian teenager from the northern West Bank stabbed a 20-year-old soldier who later died of his wounds in hospital. The assailant fled but was arrested.

Hours later, another Palestinian attacked three Israelis outside Alon Shvut settlement in the southern West Bank. According to reports in Haaretz the attacker 30-year-old Maher Hamdi Hashalamun from Hebron, first tried to run over the group at the bus stop. When he injured the group, he got out of the car and stabbed 26-year-old Dalia Lemkus repeatedly in the neck before being shot and fatally wounded by Israeli security services.

"A car stopped at the hitchhiking stop at the entrance to Alon Shvut, the driver got out of the car and stabbed three civilians who were standing there," police spokeswoman Luba Samri said of the incident in the southern West Bank.

Lemkus, an occupational therapist who worked with children had reportedly survived another stabbing attempt at a different hitchhiking stop in 2006. Police said all three were Jewish settlers with Lemkus burrial taking place on Tuesday early afternoon.

The bloodshed took place after months of clashes in and around East Jerusalem, with the unrest spreading to Arab areas of Israel at the weekend after police shot dead a young Arab-Israeli during a routine operation.

"I didn’t notice any unusual police presence in Tel Aviv but the attacks – coming on the back of each other – are important on a psychological level and it is creeping into the Israeli mind that something new is happening," political analysts and MEE columnist Meron Rapoport said. "People are widely asking themselves if this is the third Intifada or not?"

Events marking the 10th anniversary of Arafat's death have been cancelled in the Gaza Strip due to security concerns after a coordinated bomb attack last Friday, but did go ahead in the West Bank.

The Palestinian leader, who signed the 1993 Oslo peace accords with Israel but walked away from talks hosted by the US at Camp David in 2000, died aged 75 at a hospital in Paris in 2004.

His death remains clouded in mystery, with some research indicating he may have been poisoned by polonium, a theory which is accepted by many Palestinians.

The deadly knife attacks were condemned by the United States and the European Union.

The office of EU foreign affairs chief Federica Mogherini warned the situation could further deteriorate "in the absence of political perspective".

Since the summer, Israel has significantly increased police presence on the streets in a bid to rein in the unrest, but has been unable to stop a growing number of attacks by lone Palestinians, most of them in Jerusalem.

Particularly in recent weeks, the al-Aqsa compound, which the Jewish community calls Temple Mount, has been at the heart of rising tensions in the city.

Held sacred by both Jews and Muslims, access for Muslims to al-Aqsa is regularly limited to women and men over the age of 40 or 50, particularly during times of political tensions. On regular weekdays, tourists and Jews can enter the compound between 7:30AM and 10AM and for another hour at noon, but are escorted by police and are not allowed to pray or perform any religious ceremonies.

Monday's violence, however, was further afield with 17-year-old Nureddine Abu Hashiyeh from Askar refugee camp in the northern West Bank stabbing an Israeli soldier outside at a Tel Aviv train station, before fleeing the scene. He was later arrested.

The soldier was critically wounded and died in hospital after the attack, which marked the first time Israel's commercial capital has been affected by the current wave of violence.

Israel is struggling to contain the growing wave of violence in East Jerusalem which in recent days has spread to Arab towns and villages inside the country.

Since August, there have been four deadly Palestinian attacks in Jerusalem - three of which were "hit-and-run terror attacks" that killed five Israelis - and one attempted drive-by shooting of right-wing Israeli activist Yehuda Glick.

Since July, police have arrested some 900 Palestinians for public order offences in East Jerusalem and indicted around a third of them.

Over the weekend the unrest spread north, to areas of Israel with high concentration of Palestinian citizens of Israel, after police shot dead 22-year-old Kheir Hamdan, an Arab-Israeli in Kufr Kana, near Nazareth. The shooting which police believe was carried out in self defence but Palestinian authorities inside Israel insist was carried out in "cold blood" triggering a wave of rioting in Arab areas. While police claim the officers fired warning shots, video footage shows Hamden attacking the police car but then being shot in the chest at close range, despite trying to flee the scene.

The killing sparked thousands of protestors to take to the street, with clashes breaking out with police.

Prime Minister Benjamin Netanyahu vowed Sunday that anyone breaking the law would be "punished severely".

On Monday, he went further telling a meeting of the Likud Party members that: “To all those who are shouting against Israel and demonstrating against it - you are welcome to move to the Palestinian Authority or to Gaza, Israel won’t stand in the way.

“But whoever stays here must know - we will stand in the way of terrorists and attackers. I have given instructions to use all of the means at our disposal, including passing new laws, including destroying terrorists’ homes, and other measures.”

Some analysts are seeing such statements as a shift right for Netanyahu.

“Netanyahu […] has lost control regarding his statements in reactions to the demonstrations. There is nothing new in his beliefs but in this kind of rhetoric that is usually heard from people like [Economy Minister Naftali] Bennet and [Foreign Minister Avigdor] Lieberman,” said Rapoport.

Both Bennet and Lieberman are members of the far-right Jewish Home party, which is part of the Netanyahu-led coalition.