Turkey on Saturday sent more tanks into the northern Syrian village of al-Rai, opening a new front after its intervention last month against the Islamic State (IS) group, state media reported.

The tanks crossed into the village from Elbeyli in the Turkish province of Kilis to provide military support to Syrian opposition fighters after ridding northern villages of militants in its "Euphrates Shield" operation launched on 24 August, state-run Anadolu news agency said.

By supporting the rebels, mainly Arabs and Turkmen fighting under the loose banner of the Free Syrian Army, Turkey is hoping to push out IS militants and check the advance of US-backed Syrian Kurdish fighters, Reuters said.

Turkish Firtina howitzers fired on IS targets as the contingent advanced, Dogan said.

The statement also said two villages and an airport were captured by rebels on Saturday in the al-Rai region.

In the last few months, al-Rai has repeatedly changed hands between rebels and IS.

This is Ankara's most ambitious operation during the five-and-a-half-year Syria conflict, backed by the tanks as well as warplanes and special forces providing support to rebels.

Ahmed Othman, a commander in pro-Turkey rebel group Sultan Murad, told AFP in Beirut that his group was now "working on two fronts in al-Rai, south and east, in order to advance towards the villages recently liberated from IS west of Jarabulus".

Othman said it was the first phase of their plans. "We want to clear the border area between al-Rai and Jarabulus from IS, before advancing south towards al-Bab [the last IS bastion in Aleppo] and Manbij [controlled by pro-Kurdish forces]."

After the Kurds' success in Manbij, they said they wanted to advance and link their other two "cantons" in northern Syria - Kobane and Afrin.

President Recep Tayyip Erdogan said on Friday that Turkey would not allow the group to create a "terror corridor".

Militants from the outlawed Kurdistan Workers' Party (PKK) were blamed on Saturday for the deaths of 20 Turkish soldiers and a village guardsman after three separate clashes and an attack in a violent 48 hours in the country's east and southeast.

The guard killed was part of a group of local residents who cooperate with Turkish security forces against the PKK, listed as a terror group by Ankara and its Western allies.

In Cologne, Germany, meanwhile, as many as 30,000 people took part in a protest against the Turkish offensive in Syria, German news agency DPA reported, while calling for the PKK leader and one of its founders, Abdullah Ocalan, to be released from jail.

The intervention into Syria last month caused another complication in what was already a tangled five-year civil war, with Ankara and Washington supporting different proxy groups seeking to retake territory from IS.

The US has provided training and equipment to the YPG, much to Ankara's chagrin.

Within 14 hours on 24 August, Turkish-backed Syrian rebels recaptured the border town of Jarabulus from IS and continued to make gains in villages nearby.

According to the Britain-based Syrian Observatory for Human Rights, Turkey-backed rebels also took control of three villages close to the border on Saturday, two on the Jarabulus front and one on the new al-Rai front.

Observatory head Rami Abdel Rahman said that only "25km was left for the pro-Turkey rebels to control the border area between al-Rai and Jarabulus".

Turkey has also carried out strikes against the YPG north of the town of Manbij, which the Kurds seized last month. Turkey At War
Eleven killed in attack, clashes with Kurdish rebels in Turkey 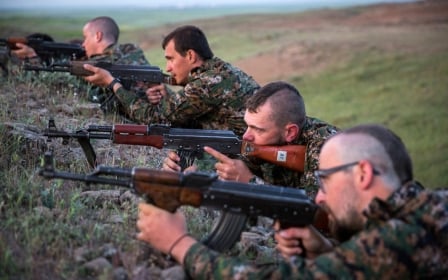 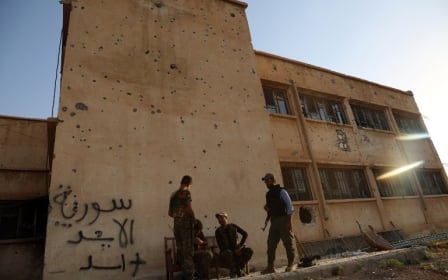