Morocco has reported its first case of coronavirus as the illness continues to spread across the Middle East and North Africa.

The health ministry said the virus had been detected in a Moroccan man living in Italy who had returned to his home country.

The man's condition is not thought to be critical and is currently receiving treatment at a hospital in Casablanca.

The report comes a day after neighbouring Tunisia announced its first case of the virus.

The Tunisian man had also contracted it while in Italy, which has been one of the worst hit countries by the virus.

The number of deaths from the coronavirus, also known as COVID-19, has reached 3,110 globally, according to the World Health Organisation (WHO). Over 90,000 people have been infected worldwide since it first emerged in China's Hubei province in December.

In February, the WHO reported that 80 percent of COVID-19 cases report only mild, flu-like symptoms and that just 2 percent of cases have resulted in death. 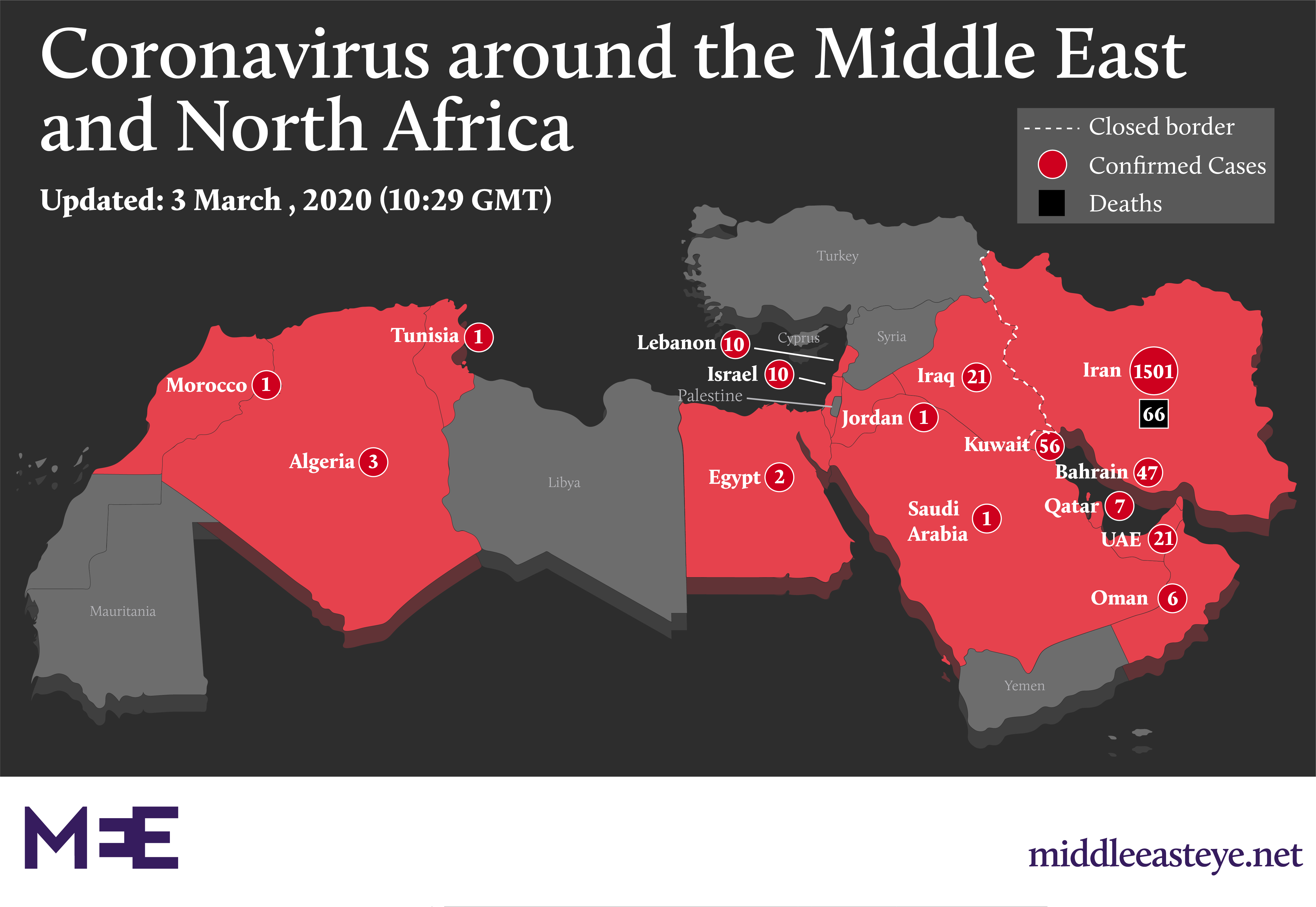 Although vast majority of cases are in China; South Korea, Italy and Iran have emerged as the countries with the most cases outside the epicentre.

On Tuesday, it was reported that 23 Iranian MPs had tested positive for the the virus, days after suspending sessions.

According to BBC Persian, the lawmakers may have been infected due to their contact with their constituents across the country, which has reported the highest number of cases outside China, where the virus originated in January.

In total, 77 people have died and 2,336 have been infected by the coronavirus, Iran's Deputy Health Minister Alireza Raisi said in an announcement on state TV on Tuesday.

On Tuesday, Saudi Arabia announced it was barring citizens and residents of Gulf Cooperation Council (GCC) countries from entering the kingdom for 14 days after returning from outside the region due to coronavirus concerns, state news agency SPA reported.

Travellers coming from any fellow GCC state - the United Arab Emirates, Bahrain, Kuwait, Oman and Qatar - must spend 14 continuous days there and show no signs of the coronavirus before being granted entry, SPA said, citing an interior ministry source.

Saudi Arabia reported its first case of coronavirus on Monday in a Saudi national returning from Iran, which has reported the most deaths outside China, where the flu-like disease originated.

The other GCC states have also diagnosed the infection in people who had visited Iran, totalling at least 141 cases.

Numerous events and projects have been suspended in other countries across the Gulf over coronavirus fears.

Qatar announced on Tuesday that its Dimdex defence exhibition due to be held this month had been cancelled over virus fears, while the electronic music Ultra festival at Abu Dhabi's 25,000-capacity Du arena and concert Music Bank at Dubai's 17,000-capacity Coca Cola Arena have also been cancelled.