Mosul burns as IS resorts to scorched earth tactics in retreat 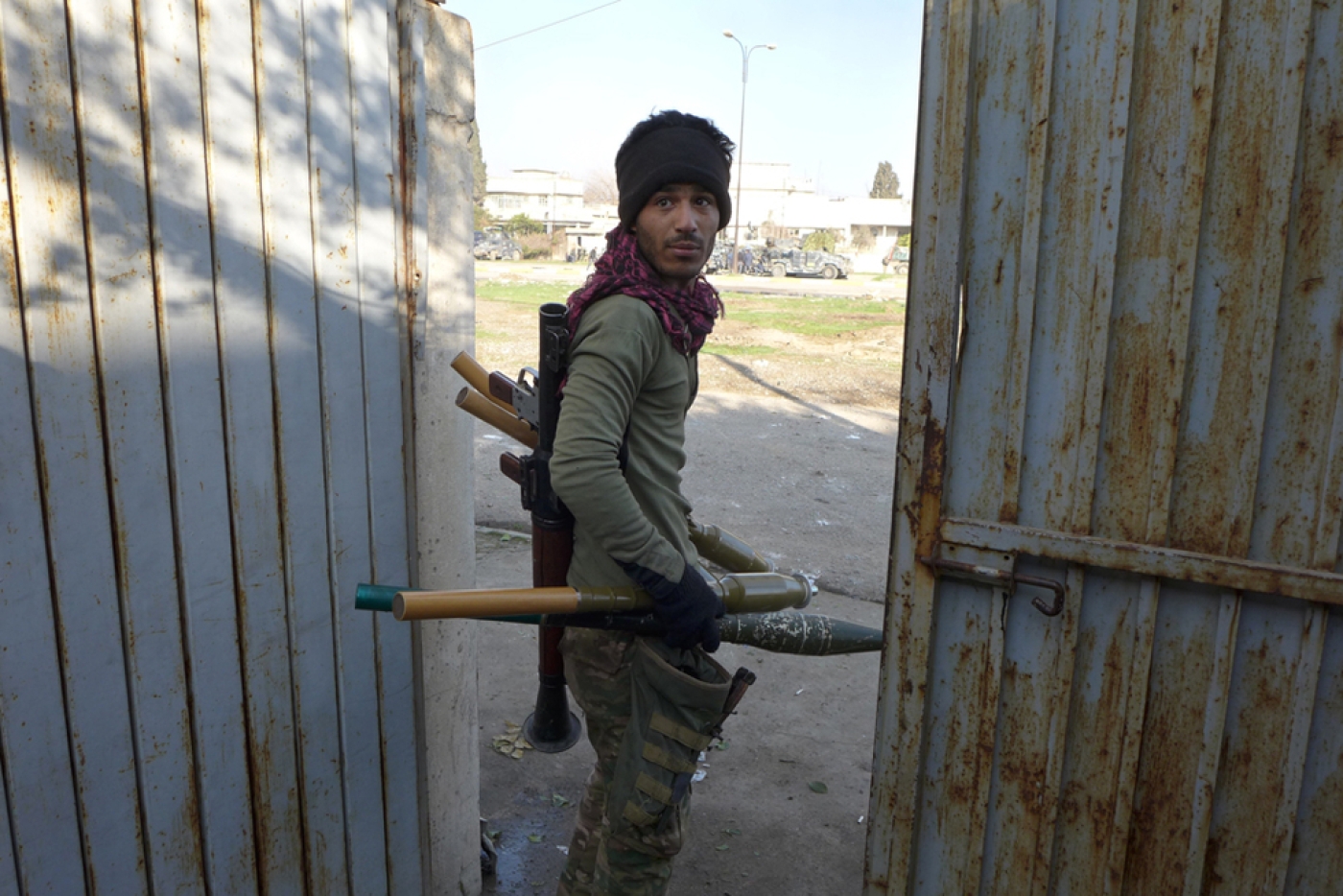 MOSUL, Iraq - When dawn breaks over western Mosul, the Iraqi Army's latest advance into the city has already been underway for several hours. The air is filled with gunfire, and the ground is sporadically shaken by explosions from air strikes and mortars.

The military engineering team from Iraq's elite Rapid Response Division (ERD), the unit leading the offensive towards central Mosul, jump from the back of a battered Toyota pick-up truck and throw rucksacks of equipment over their shoulders.

We're making good progress, but there is a lot of crossfire

They wend their way towards the frontline via a route smashed through walls of abandoned civilian homes into a garden where a group of soldiers drink tea by an open fire surrounded by armchairs.

Along a wide main road running behind a flimsy metal garden fence, the war against Islamic State (IS) in Mosul is going at full throttle. After a briefing on current positions, the engineering team lines up by a metal gate, preparing to reach the forward positions, located either side of a junction overlooked by IS snipers.

One by one, the green-clad figures sprint the 75 metres across a road scattered with debris to reach a line of military vehicles.

Since moving into the position, the dark blue vehicles of Iraq's Federal Police, who hold areas newly gained by ERD forces, have been penned in by renewed sniper fire and rocket-propelled grenade (RPG) attacks from either side.

The only way to reach the front lines now is on foot, and the IED team moves 25 metres across the junction where the furthest forward ERD units are advancing.

A barrage of incoming fire shows that IS snipers are still holding their positions. Soldiers say at least one of the snipers is Chechen, said to be IS’s most elite, and terrifyingly accurate, gunners.

'We've been held back by suicide attacks'

He monitors progress from the gateway and, like other commanders, on an iPad. "Yesterday we advanced 300 metres, held back by suicide attacks, but our division is fighting back very strongly today."

The drivers of three car bombs were killed by ERD forces before they could reach their targets earlier this week but another suicide vehicle, which was driven out from its hiding place in a civilian home inside newly gained ERD territory, caused a devastating blast on the same main road the soldiers now have to cross.

In the garden, under trees budding with the first leaves of Iraqi spring, an ERD engineer fiddles with a small drone, its underside fitted with a clear plastic unit.

He pulls out two white grenades, featuring white feathered fins resembling shuttlecocks. These are manufactured versions of the homemade drone-borne IEDs IS has been using for months to terrorise eastern Mosul and attack Iraqi military along the front lines.

"Daesh [Islamic State] are using these, so now we're going to as well,” he says, demonstrating how the grenades slot into the plastic unit.

"I don't know where these came from, maybe Japan, but we will try them out for the first time today."

The noise of a helicopter wheeling overhead suddenly changes to a sinister crack-crack-crack as it prepares to fire on IS positions. Pairs of rockets zip through the air with a sharp whoosh.

Seconds of silence pass, then the explosions. An ERD soldier stands on an armchair, peering over the fence through the branches of a tree, to watch the plumes of smoke rising.

The slight build of RPG fighter Thaif, 21, appears through the broken garden wall, laden with RPGs almost the same size as himself. He has big sad eyes and a quick smile.

"This RPG launcher belonged to a friend of mine who was martyred in Ramadi and, since then, I have been using it and now I only do RPGs," he says, patting the cracked wooden barrel of the launcher.

He lights a cigarette, pauses momentarily in the gateway, then runs out into the road.

Federal policemen from the other side wave their arms frantically, shouting: "Go back, go back," as a volley of gunfire starts. It is impossible to tell from where it is coming. Thaif zigzags back to safety, stacks the RPGs on an armchair by the fire and asks that a picture be taken of him.

The fighting is getting stronger. Explosions from incoming missiles are terrifyingly close.

An incongruous bleat emanates from the back of the garden. Two sheep are grazing nonchalantly on an untrodden corner of lawn. ERD soldier Hisham, 32, drives them away.

"You don't want to get shot," he warns, waving his arms dramatically. "Go back, go back." They obediently leap through the broken wall as sniper fire whizzes overhead.

Hisham speaks into a radio. ERD units have now reached a telecommunications mast behind the IS lines and are moving house-to-house, smashing through walls with a sledgehammer.

Two members of the Federal Police run across the main road, bursting through the garden gate. They pour tea from a kettle standing in the embers of the dying fire.

"Yuk, no sugar. Where's the sugar?" one asks. With everyone looking towards the frontline, no-one replies.

The policemen disappear through the hole in the garden wall. They return victoriously holding up a teapot from an abandoned home and dart back out through the metal gate, running haphazardly across the blown-out tarmac. Their safe return with the teapot is greeted by cheers.

An armoured personnel carrier (APC), its sides caged and lined with sandbags for added protection, makes several modest attempts to move up to the junction.

An incoming IS projectile zips through the air and the APC reverses rapidly back to safety. Iraqi forces have already lost too many military vehicles, the twisted wreckage of which line the Mosul front lines, in mortar and RPG attacks.

Two more air strikes result in by huge explosions before a thin civilian appears in the garden carrying a length of rope, looking for the sheep.

He is called Hassan and recalls the apparently halcyon days of the first seven months of IS rule after the group seized control of Mosul in summer 2014.

"Then they suddenly changed, and life became miserable and frightening as they started executing people," he says. "Life became like living in a horror movie."

He runs through hundreds of executions he witnessed in the neighbourhood, from the first incident when a man found with a forbidden mobile phone was hung from a post on the very road the soldiers are now trying to fully control, and shot in the head with an American pump-action shotgun.

"It blew his head apart and they left the body hanging there for more than a week," he says.

For more than two years, the once-busy main road running from east to west Mosul over the Fourth Bridge, formerly called Saddam's Bridge, served as a public killing ground for IS, who terrified residents into submission by regularly leaving it lined with the corpses of slain subversives.

"They deserve it," says Hassan with a grin. His 12-year old son cowers behind him while he warms to his theme of IS executions. Horrific killings were such a regular part of daily life, people have become inured to talking about them.

A sudden shout of "car bomb, car bomb" interrupts him, sending several soldiers running inside the open doors of the house. IS suicide car bombs are one of the biggest threats the Iraqi military continue to face on the front lines and have been responsible for many fatalities and horrific injuries.

Hassan and his son rush back through the opening in the wall towards the basement of his house, where three families have been living amidst the fighting for over a month. None of the soldiers wants to hang around to witness the origin, progress or finale of an IS suicide car bomb.

The air erupts into a chaos of gunfire and explosions that characterise the Iraqi frontline response to incoming IS car bombs. A helicopter flies low and sends out a stream of missiles. One hits the vehicle, which detonates in a volcanic explosion.

A chunk of metal flies high and plummets back down, landing amongst the Federal Police vehicles, injuring several men. An ambulance hurtles around the corner, making the daring drive near sniper fire to collect the injured. Behind, a billowing cloud of stinking white smoke rises from the blast.

It feels like late afternoon, but it is only 8.45am. The forces on the furthest forward front lines need supplies, and soldiers making the 25-metre sprint across the junction are now mainly carrying bottled water, ammunition and food.

Two young federal policemen crouch at the corner, one with a crate of water on his shoulders, the other with a box of food. When they zigzag across the road, one is felled by a sniper bullet in his leg.

Almost at the other side, his friend turns, throws the crate of water high into the air, the bottles falling and bursting on the ground around him, and runs back to drag his injured comrade to safety. The policemen try to stem the bleeding while waiting for another ambulance.

Thaif gathers up his RPGs, slotting one into the barrel of the launcher, and dashes out across the road. He is closely followed by another ERD soldier carrying a box of ammunition on his shoulder.

Black smoke pours from buildings 300 metres away, along the IS frontline.

"They're burning the houses. It's a good sign," says Hisham, peering over the garden fence.

"When Daesh start burning houses on the frontline it means they are starting to retreat. They destroy everything before they leave and use the smoke as cover." 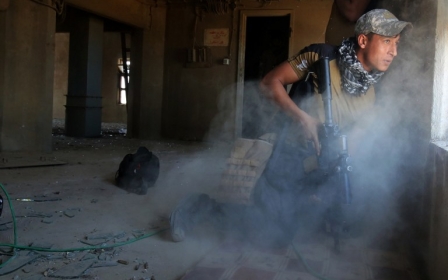 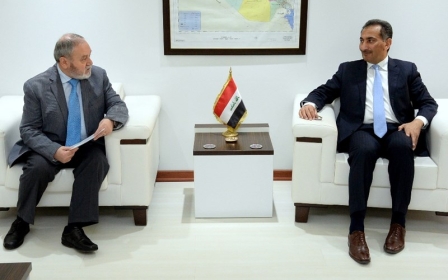 Iraq at War
IS must be tackled in Africa and Syria after Mosul: Iraqi minister 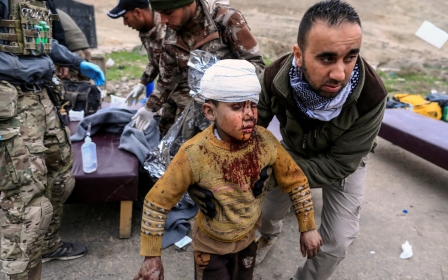