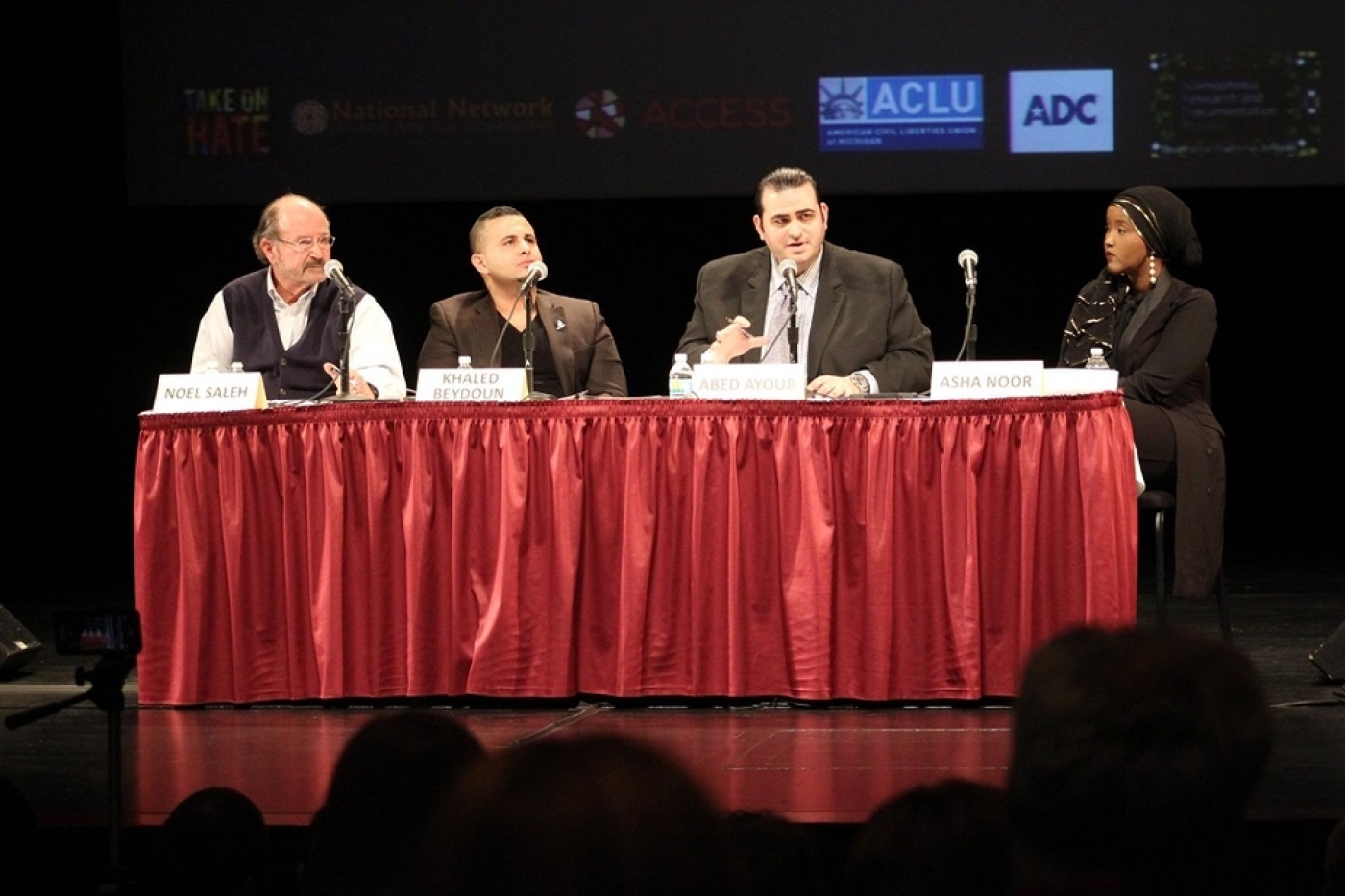 But on Wednesday, the Trump administration issued new guidelines to admit US permanent residents who had been turned back since the president signed the order five days earlier.

This change is not the result of the White House’s respect for legal immigrants or even the outcome of a court battle, attorney Noel Saleh says.

“Activism, the pushback, the demonstrations at the Detroit Metro Airport and all the airports throughout the United States forced this administration to back off,” Saleh, who works with the American Civil Liberties Union (ACLU), commented on allowing green card holders to return to the US.

Saleh, a veteran immigration attorney, was speaking to a crowd of more than 1,000 people at a townhall meeting in Dearborn, Michigan on Wednesday night.

The event was a part of a multi-fronted effort that southeast Michigan’s large Arab and Muslim communities are organizing against Trump's order.

Earlier on Wednesday, the Michigan Council of Imams held a press conference at the Detroit suburb of Dearborn Heights in conjunction with interfaith advocates to reject Trump’s action and emphasize that the United states must remain welcoming.

A federal judge ruled on Wednesday that the US must allow immigrants who have received initial clearance for visas, even if they are from the barred countries. A day after the ban was signed, another judge ordered a stay on deportations of individuals who reached the US after the ban.

“Litigation without activism will never be effective,” Saleh said.

He called for unity against the order - a quest that appears to be underway, as evidenced by the diversity of the anti-Trump movement.

“This is an assault on every thinking member of the society, and we need to unite and protect against that assault,” Saleh said.

Speaking at the townhall, Khaled Beydoun, a law professor at the University of Detroit Mercy, said the Trump administration’s state-sanctioned Islamophobia will not spare Muslim US citizens.

“This is a very serious order, deeply rooted not only in Islamophobia, but xenophobia and in a way white supremacy as well.”

Abed Ayoub of the American-Arab Anti-Discrimination Committee (ADC) explained a provision in the executive order that calls for creating a public database for all crimes committed by immigrants since the 9/11 attacks.

“The last time this happen in world history that we know of was in Nazi Germany when they used to list the crimes of the Jews,” he said. “This is a very serious order, deeply rooted not only in Islamophobia, but xenophobia and in a way white supremacy as well.”

“For us, this is truly a faith issue; it’s a moral issue,” she said.

Mohammad Ali Elahi, an Iranian American imam, said democracy is under attack in the United States. He encouraged US Christians to denounce bigotry in the same way that Muslims are asked to condemn terrorism.

He said the executive order does not enhance national security. The imam noted that none of the countries listed on the ban have attacked the United States, accusing Saudi Arabia, which was not affected by the executive order, of funding militant groups.

“I’m not suggesting that we have to add the Saudis to this list and make it eight; I’m saying, 'no list at all',” Elahi continued. “The people who live in Saudi are innocent people, too. I’m saying you cannot eat your cake and have it at the same time. This is double standards.”

At the townhall, US Congressman Dan Kildee, a Democrat whose district is based in Flint, Michigan, also reiterated that the ban does not protect Americans.

“It makes us less safe. This is not about the security of a nation; this is about the insecurity of a single individual,” he said as the crowd erupted in cheers.

The congressman added that the ban is inconsistent with US values or law. He said while elections do have consequences, elected officials do not define what America is.

“Let’s raise our voices… I am absolutely convinced that the strength of this country, which is manifest in its people, will take back what has taken place,” Kildee said. “It will send a message to the world that the symbol of the Statue of Liberty and those words etched on that statue are true.”

The Statue of Liberty, molded after an Arab woman, stands next to Ellis Island, the main port of entry for immigrants throughout the first half of the past century.

A line from a poem featured on the statue has become a powerful proclamation for welcoming refugees in the age of trump: “Give me your tired, your poor, your huddled masses yearning to breathe free”.

Asha Noor, a coordinator for Take on Hate, who moderated the townhall, said that as a Somali American, she finds the ban demoralizing.

She said the order reinforces that the US does not value Muslims and people of color as full citizens.

“It makes me very anxious for individuals who don’t have citizenship, because I want to be there to help them, but I know that right now the situation is really daunting,” she told Middle East Eye.

However, Noor found solace in the large turnout at the townhall meeting and the growing support across the country.

“I think that the pushback, the resistance, the organizing show that a lot of Americans do not agree with these executive bans, and a lot of Americans, even those who are not impacted are standing up and saying our country has been hijacked by this level right (wing) racist values,” she said.

Noor Ali is the US-born daughter of an Iranian mother and an Iraqi father. Although still in high school, she has been present and vocal at numerous protests against the ban.

At Wednesday’s community gathering, she asked the panelists how she can educate and counter uncomfortable comments by white school mates who support Trump.

She told MEE that even though both her parents are US citizens, they have cancelled trips overseas out of fear that they may be forced to relinquish their American passports.

Ali’s family immigrated to the US from Syria in 1996 in a vetting process that took 14 years. It is not unusual for adults’ US immigration applications to drag on for more than a decade before being approved.

“If 20 years ago this ban was put in place, they wouldn’t have been able to come here,” she said. “It’s very sad because my family has contributed so much to this country - my brother is a doctor and the other one is an engineer; my sister is a teacher, the other sister is a pharmacist.”

Joe Mshahwar, a Syrian American activist, sees the ban as a continuation of a more than century-long war by the United States against the people of the Middle East.

"Countries bombed methodically and mercilessly then their people subsequently banned"

“Even to call it a Muslim ban is obscuring the nature of this escalation that’s happening against the Middle East,” he told MEE. “There’s been a bipartisan colonial project across the entire North Africa and Middle East region. Those seven countries on the list are some of the worst targeted by this project.”

While he welcomed the solidarity from Americans against the executive order, he suggested that the support should take an anti-war tone.

“I’m really heartened to see this resistance to racism in the United States,” he said. “But I’ve been disheartened to see the lack of conversation and demands put forward about the wars that cause this racism and this ban and this crisis in the first place.”

Shahad Atiya, an Iraqi American lawyer, said the executive order is a Muslim ban despite the denial of the Trump administration.

“If it quacks like Muslim ban and it walks like Muslim ban, it is a Muslim ban,” she told MEE. “And I think the Iraqi community feels especially singled out since America has gone to war with Iraq multiple times. And after the 2003 war, they promised rebuilding, they promised coming together. And here we are, more than a decade later, we have Iraqis not being allowed into this country.”

Beydoun, the law professor, also reiterated the nature of US foreign policy in the Middle East within the context of the ban.

“Countries bombed methodically and mercilessly then their people subsequently banned,” he said. “The scores of men and women, children and elderly detained and stripped of dignity have committed no crime. No. Their only crime is their country of origin and more specifically their faith.” Muslim Ban
Sally Yates, fired by Trump, has been nominated for the JFK award