Muslim ban unconstitutional and dangerous for US, say Democrats 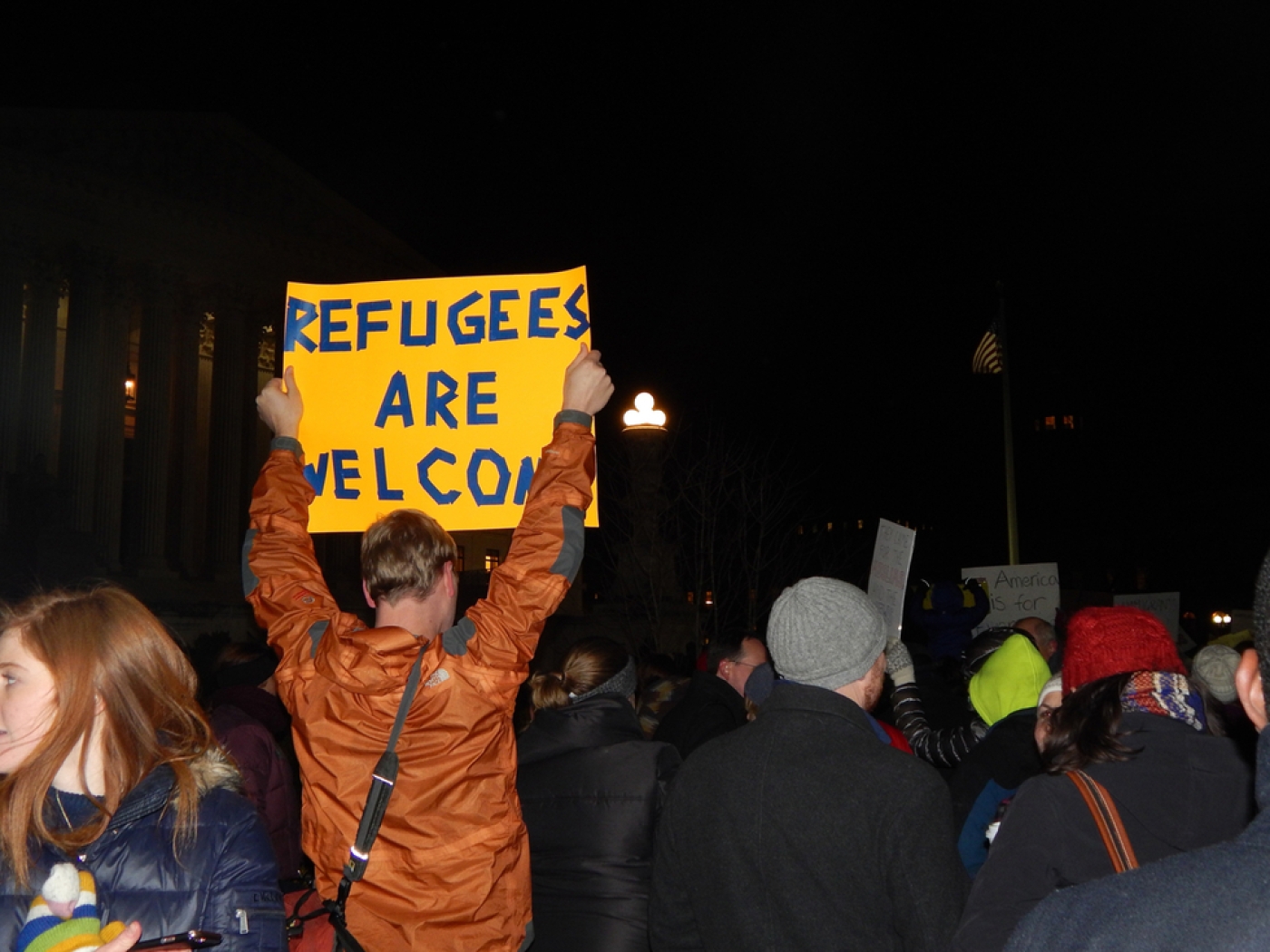 Police officer estimated as many as 5,000 people were in attendance, more than anyone expected (MEE/Molly McCluskey)
By
Molly McCluskey

WASHINGTON, DC - After a weekend of protests and rallies around the country decrying President Donald Trump’s ban on immigrants and refugees entering the United States, congressional Democrats staged a protest and vigil on the steps of the Supreme Court on Monday night.

In a nation founded and built by immigrants, whose original colonists were themselves fleeing religious prosecution, the idea of banning a group of people based on their religious beliefs has struck a chord. Even some Republican leaders, 20 at last count, have broken with Trump as the protests have grown in size and volume.

"Donald Trump is trying to chip away at the very foundation of our democracy. Our country is in crisis.” - Senator Elizabeth Warren

Under the executive order, even people who had already received visas and were entering the country legally have been detained at US airports.

“Donald Trump has issued an executive order that is illegal, it is unconstitutional, and it is immoral. We are here to fight back,” Senator Elizabeth Warren (D-MA) said. “Donald Trump is trying to chip away at the very foundation of our democracy. Our country is in crisis.”

Representative Eric Swalwell (D-CA) told Middle East Eye during the rally: “I went to the Supreme Court tonight to make sure America is always a country that welcomes refugees. I've seen first hand that refugees help us as much as we help them. President Trump's Muslim ban violates our values and makes us less safe. I'm heartened that people across America are joining hands to reclaim our values.”

“Here in Washington and all over this country, I think more and more people understand that what Trump did in his ban is un-American, it’s unconstitutional, and it’s something that’s going to make us less safe, not more,” former Democratic presidential candidate Bernie Sanders said at the rally.

“This country has always been a country that welcomes people into our nation. Of course we are going to vet people and make sure they’re not going to do us harm. But to tell over a billion Muslims in the world that they are not welcome to come into the United States sends a horrible message, and something that runs contrary to American values.”

With the US Capitol Building behind them and the Supreme Court in front, thousands of protesters filled the street in near-freezing temperatures. When asked for an estimate of how many protesters were in attendance, an officer with the US Capitol Police could not say. Fresh from the controversy over the number of people attending Trump’s inauguration - and the slap to the National Park Service for commenting on it publicly - his reticence was hardly a surprise. However, another officer estimated as many as 5,000 people were in attendance, and said it was more than anyone expected.

Tom Keefe, a well-dressed older gentleman, walked the crowd with a sign held high over his head that read, “Irish immigrants helped build America.” Keefe told Middle East Eye that his grandmother, Elizabeth, had migrated to the US from Ireland in 1902. “The Irish were scapegoated in those days, and I see the same disparaging of Syrian refugees,” Keefe said. “It struck me very, very deeply.” So deeply that Keefe had flown from his home in Washington state for the sole purpose of attending the protest in Washington, DC.

That was a recurring theme in people who spoke with Middle East Eye, that those in attendance had families who had emigrated, or been refugees, or had friends struggling with a visa issue. It was personal for those in attendance, and something more - a deep betrayal of the image they had of their country.

Alex Kapitanskaya, whose family emigrated from Russia, held a sign demanding Iraq War interpreters be allowed into the country. “My family were immigrants, and although we didn’t come as refugees, I see so many similarities,” she told Middle East Eye, when asked why she was at the protest. Kapitanskaya said that the treatment of Iraqi translators who had provided support to American troops during the war was particularly egregious.

The US has a special immigrant visa (SIV) programme for combat translators who assisted American soldiers, and consequently, found their lives and their families at risk.

As of Friday, translators who had obtained SIVs - often after years of waiting for approval - but had not yet landed in the US were barred from entering. “It is an absolute travesty and a national shame that people who were under no obligation to protect American troops in Iraq sacrificed so much only to be kept waiting for years, and now they’re living in turmoil and purgatory,” Kapitanskaya said.

Brooke Gardner held a handmade poster with hand-drawn flags from around the world, and the words “Immigrants make America great!” She said her best friend is Iranian and Gardner came to support her, and everyone who is affected by the ban. “My dad doesn’t have American citizenship, but I feel like because he’s white and Christian it’s somehow fine, and that is so completely unfair.” Gardner’s father holds Australian citizenship, Gardner said.

Row over legality of order

On Monday, acting Attorney General Sally Yates, a Democratic appointee, issued a directive to Justice Department attorneys that they not defend the executive order, as she was not convinced it was “lawful”.

A statement from the White House said that Yates had “betrayed the Department of Justice by refusing to enforce a legal order designed to protect the citizens of the United States.” It also said that “Ms Yates is an Obama Administration appointee who is weak on borders and very weak on illegal immigration.”

Yates was replaced with federal prosecutor Dana Boente from Virginia.

Trump tweeted on Monday that he will make an announcement on his pick to fill the vacant Supreme Court seat on Tuesday at 8pm EST.