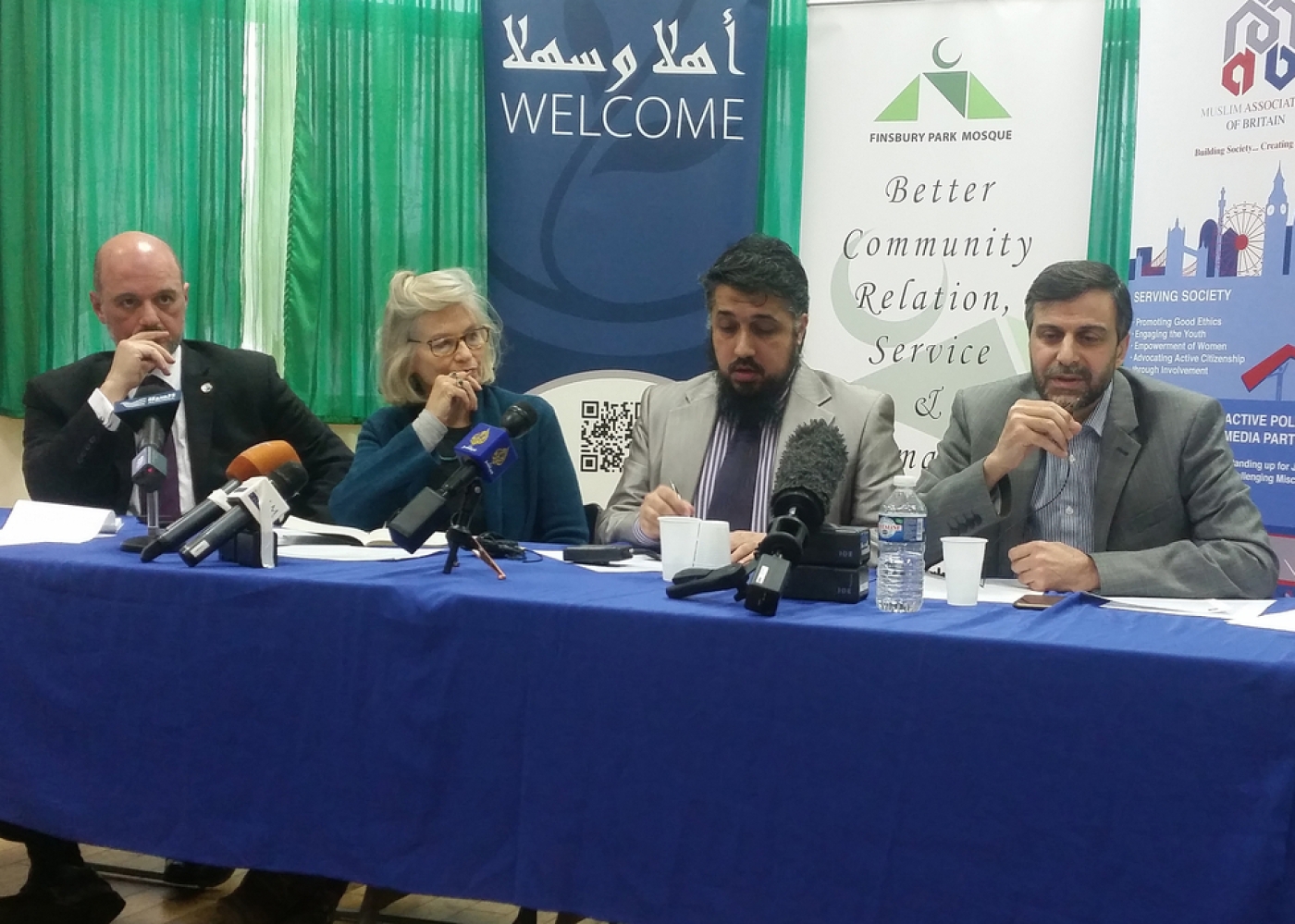 Representatives of the Cordoba Foundation, the Muslim Association of Britain and Finsbury Park Mosque address the media (MEE/Simon Hooper)
By
Simon Hooper

The British government is jeopardising the country's security by undermining efforts within Muslim communities to address the threat of violent Islamic extremism, British Muslim groups warned on Tuesday.

At a news conference at Finsbury Park Mosque in north London, the leaders of the Cordoba Foundation and the Muslim Association of Britain, which were both named in a government review into the Muslim Brotherhood published last month, said they “totally rejected” allegations of links to the organisation.

The review, which was commissioned by British Prime Minister David Cameron in 2014 and published in an abbreviated form 18 months later, just hours before parliament's Christmas recess, concluded that the activities of the Muslim Brotherhood and associated organisations were “contrary to our national interests and our national security”.

But Anas Altikriti, the head of the Cordoba Foundation, told Middle East Eye that the government was making enemies of Muslim organisations that were among those best placed to tackle the threat of violent Islamic extremism.

“These organisations are the first line of defence, at a social level and a national level, to speak to those who are vulnerable to the preachings of ISIS and tell them there are better ways and peaceful ways and constructive ways of venting their frustrations,” Altikriti said, using an alternative acronym for the Islamic State (IS) group that controls areas of Syria and Iraq.

“For the government to disregard that and to make that first line of defence an adversary and an enemy is incredibly insensible and illogical, and extremely dangerous and counter-productive.

“I fear that if there is a threat to our national security today it is from the hard-headedness and the doggedness of the government to see that whoever it speaks to and engages with conforms to its policies and its ideas.”

Al-Tikriti: "When we find govt policy disagreeable, such as on Palestine, foreign policy, Prevent, we will call on Muslims to protest."

Omer el-Hamdoon, the president of the Muslim Association of Britain, also raised concerns about the government's Prevent counter-extremism strategy, and rejected the review's allegation that the MAB had “consistently opposed programmes by successive governments to prevent terrorism”.

"Unfortunately one aspect of the review is criticising us for objecting to the Prevent agenda, as if anything the government says has to be accepted by everyone," he said.

"This is obviously something that is not part of any democratic system. Opposing and speaking out is a part of active citizenship in the world today."

Hamdoon said the review was right in stating that the MAB consistently condemned terrorism.

But he told MEE that by refusing to work with individuals or groups that it considered extreme, the government was “narrowing the kind of organisations that can work for the betterment of society” and “pushing aside those that can fight terrorism”.

British government policy in recent years has focused increasingly on tackling non-violent extremism, which Cameron said in a speech last year was a “gateway” to violence. Prevent was extended by law last year into public sector settings including schools, nurseries and universities, and other measures introduced to silence so-called hate preachers.

“Part of the Prevent programme is allowing people who are untrained to make assertions about what extremism is and they are accusing people, even children in nurseries. They are trying to link any type of extremism, which could just be religious conservatism, to violent extremism, and that is why we have consistently rejected and continue to oppose Prevent,” said Hamdoon.

El-Hamdoon, @MABOnline1: "On the one hand we are asked to integrate. When we do we are accused of entryism."

Altikriti also raised concerns about reports that the UAE may have sought to exert influence over British policy by threatening to withhold contracts unless the UK government took action against the Brotherhood, which is considered a terrorist group in the UAE.

“The revelations that we heard regarding the unsavoury activities and lobbying powers of undemocratic authoritarian regimes in the Middle East such as the United Arab Emirates should be of extreme concern to everyone. We must all be concerned about who is pressurising our government and influencing our policy-making process,” he said.

While stressing that he had no links to the organisation, Altikriti said that the Muslim Brotherhood had an important role to play in the political transition of Middle Eastern countries.

He also condemned the UK and other Western government for failing to condemn more forcefully the violent military coup that removed the Brotherhood from power in Egypt in 2013 with the overthrow of democratically elected president Mohamed Morsi.

“The Muslim Brotherhood were victims of a modern tragedy in the way that a fledging democracy was crushed in such a brutal manner,” he said.

“The UK stayed quiet and that sent a very dangerous message to hundreds of millions of frustrated young Muslims that democracy doesn't work.”

Mohamed Kozbar, the chairman of the Finsbury Park Mosque, talked about how the MAB with the support of police and local officials had worked with the local community in 2005 to win back control of the mosque from notorious preacher Abu Hamza and his supporters.

Despite that, Kozbar said the mosque had remained a target of hate attacks, including a recent arson attempt, and was among a number of Muslim organisations, also including the Cordoba Foundation and the MAB, to have had its bank account closed down without explanation.

Mohammed Kozbar: "Our agenda is helping people, assisting our community regardless of faith or background."

The Muslim Brotherhood review was written by John Jenkins, the then-UK ambassador to Saudi Arabia, and Charles Farr, then the head of the UK's Office for Security and Counter-Terrorism and now, as head of the Joint Intelligence Committee, the UK's most senior intelligence and security official.

But in a statement signed by the Cordoba Foundation, the Muslim Association of Britain and the Finsbury Park Mosque, the organisations said the the review was “poorly structured and mistake-ridden” and based on “sweeping generalisations”.

They also called for its “full and transparent publication” and the "opening of channels of serious dialogue on confronting the challenge of extremism facing our society”.

“At a time when the government claims that its main concern is to counter extremism of all kinds... it is astonishing that it published findings which allude to parity between law-abiding and outstandingly performing organisations which believe in and promote democracy, equality, freedom and human rights, with those who do not,” the statement said.