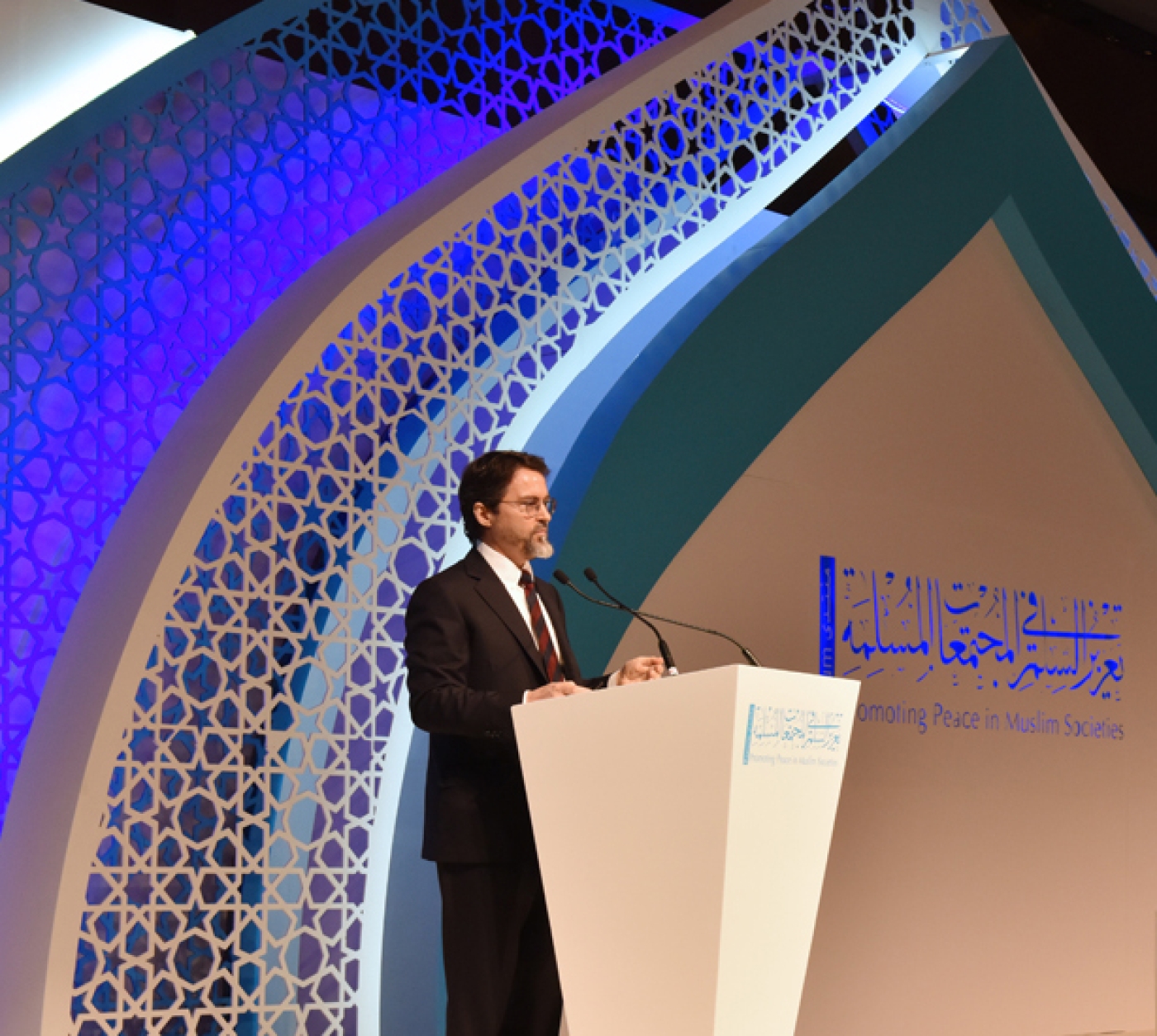 Hamza Yusuf, vice president of the Forum for Promoting Peace in Muslim Societies which is bankrolled by the UAE (Screengrab/peacems)
By
Zeinab Edah-Tally
, Areeb Ullah

Hamza Yusuf, a prominent US-born Islamic scholar, is facing criticism for his decision to be part of a 10-member panel chosen by US Secretary of State Mike Pompeo to examine the role of human rights in US foreign policy.

Pompeo on Monday unveiled the "Commission on Unalienable Rights", saying it was made up of human rights experts of "varied backgrounds and beliefs", and that it has been tasked with reviewing "the role of human rights in American public policy".

Critics of the commission have raised concerns of the panel after it appointed Harvard law professor Mary Ann Glandon, a former US ambassador to the Vatican, who led efforts against enshrining abortion as an international human right at the 1995 UN Women's conference in Beijing.

Dr Usaama al-Azami, a lecturer in Islamic Studies who studied at Princeton University in the US, said that Yusuf's decision to work with the Trump administration was a "troubling development in Western Islam".

"For one of the West's most recognisable and once almost universally esteemed Islamic scholars to throw in his lot with the most venal and Islamophobic administration in American history will be viewed by many Muslims as an unforgivable lapse in judgement which will not easily be forgotten," Al-Azami told Middle East Eye.

"This is far worse than his advice to the Bush administration in the wake of the tragic events of 9/11. That was when most Muslims voted Republican."

"In the years since 9/11, the Republican Party has gradually transformed into an Islamophobic party par excellence, culminating in the presidency of Donald Trump who won the Republican nomination on the basis of Islamophobic race-baiting and unconstitutional demands for a Muslim registry and a Muslim travel ban."

Criticism for supporting the UAE

Dr Walaa Quisay, a teaching fellow at the University of Birmingham, however, who specialises in neo-traditionalism in Islam and Hamza Yusuf's teachings, said she was not surprised by his decision to join the panel.

She believes Yusuf's close allegiance to Sheikh Abdullah Bin Bayyah, and role as vice president of the Forum for Promoting Peace in Muslim societies, a religious body that is bankrolled by the United Arab Emirates, has played a role in the type of stances he has taken over the years.

"Over the years, Hamza Yusuf has centralised the idea of stability and government as the central ideal and that Muslims should not politically engage but ensure that their hearts are clean. But when governments then use this narrative to affirm the supremacy of the state and regime then it becomes a problem," Quisay told MEE.

"Yusuf's religious and political role within the UAE has made him an international actor. He started to become that before his formal appointment as vice president and goes a long way in explaining his direction to ally himself with the political right inside America."

Zaytuna College, which Yusuf co-founded, did not respond to requests for comment at the time of writing.

Last year, Yusuf was criticised by rights groups for describing the United Arab Emirates as a country that champions civil society and is "committed to tolerance".

"For someone as influential as Sheikh Hamza Yusuf to call the UAE 'tolerant' contributes and gives credibility to the authorities' carefully tailored, yet false image, as a progressive and rights respected state," Hiba Zayadin, an assistant researcher at Human Rights Watch, told MEE.

"UAE residents who have spoken about human rights issues are at serious risk of arbitrary detention, imprisonment and torture," HRW said at the time.

US Politics
US primaries 2022: Ballots will be available in Arabic in Dearborn, Hamtramck
US Politics
US President Biden will not directly ask Saudi Arabia to boost oil production
US Politics
US Democrats call out AIPAC, pro-Israel groups during primary election cycle