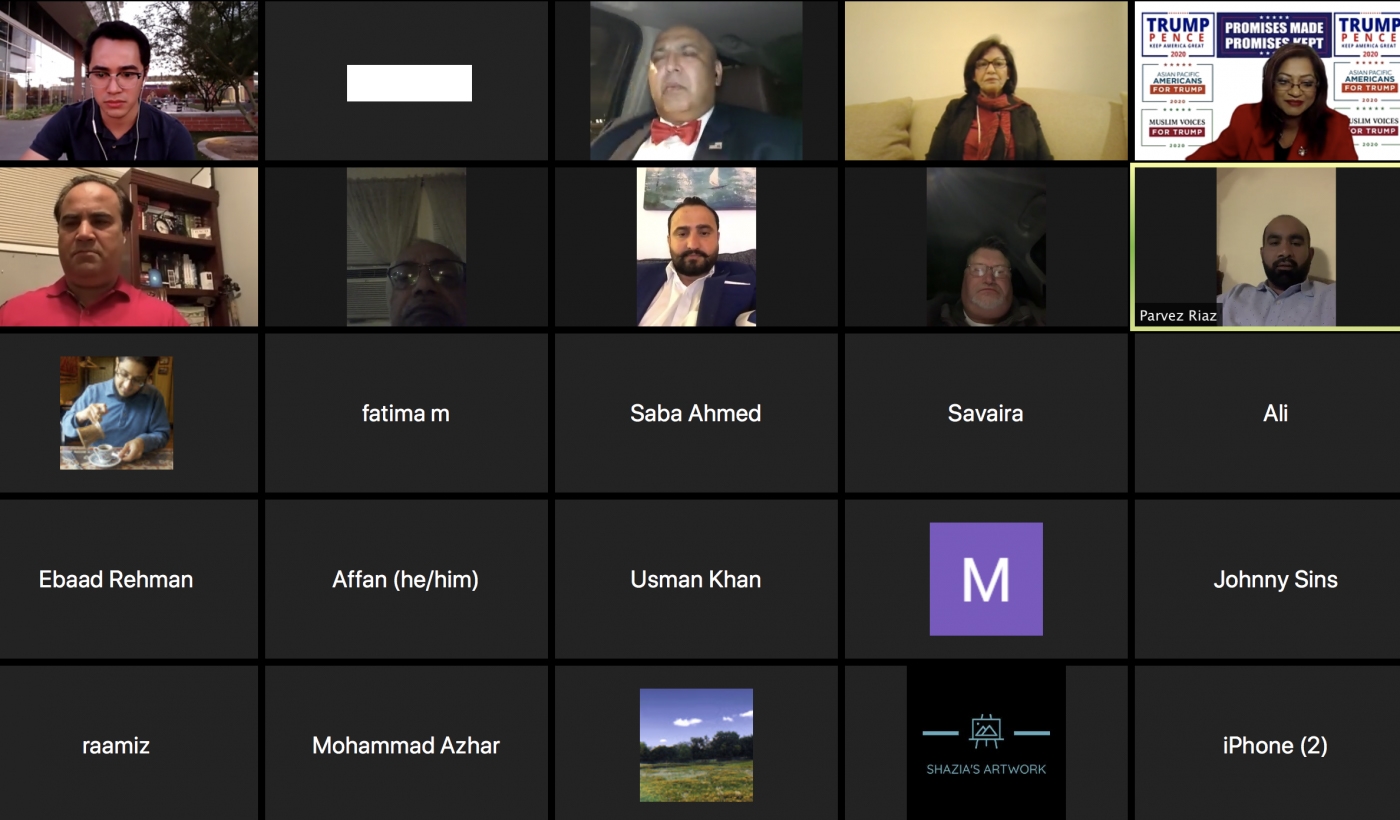 An online event organised by "Muslim Voices for Trump" descended into chaos late on Tuesday when activists infiltrated the call in another case of the new viral threat termed "Zoom bombing."

The call, arranged by US President Donald Trump's re-election campaign in conjunction with the group, had to be abandoned when it turned into a disorderly free-for-all less than 20 minutes in.

The unnamed activists made passive-aggressive comments each time a Muslim Trump supporter spoke, wrote endless insulting messages on the Zoom chat box, and asked direct questions to the Trump surrogates without being prompted.

At one point, when Farhana Shifa, co-chair of Muslim Voices for Trump, introduced herself and greeted the group, activists took turns to mockingly reply: "Wa alaikum salam", Arabic for "and unto you peace", forcing her to stop and start her address from the beginning.

When Mike Mears, the director of strategic partnerships and faith engagement at the Republican National Committee (RNC), began speaking about his party's engagement with faith communities, he too was quickly interrupted.

"But Mike, didn't Trump say 'Islam hates us'? Isn't that where he stands?" Zubair Khan, an activist on the call, asked Mears, referring to Trump's long history of demonising Muslims, banning Muslims from the country, and attempts to appoint Islamophobes into his administration.

"But that is exactly what he said," the activist replied.

To which the call's moderator, Saba Ahmed, jumped in and said: "No, that was several years ago. It was definitely not, er, well advised," she said before cutting him off.

But the disruptions continued. Despite requests to the moderator to mute all guests, the chaos only deepened. Soon, speakers were competing with the audio of loud television sets, the Islamic call to prayer, and multiple unprompted self-introductions - forcing Matthew Martinez, a leader of the group Youth Engagement for Trump Victory, who was also on the call, to interject and end the event.

"Alright, everybody, let me get your attention here. I am going to end this Zoom call. I am going to let Farhana know about the next Zoom call," Martinez said, before he too, was interrupted with YG and Nipsey Hussle's hit single F**k Donald Trump.

"Goodnight," Martinez slipped in, before cutting the call.

Muslim Voices for Trump, co-chaired by Farhana Shifa and Sajid Tarar, are long time supporters of the president.

Tarar rose to prominence in 2016 when he delivered the benediction at the closing ceremony of day two at the Republican National Convention. According to media reports, he was greeted with boos at the event.

His organisation, which has a minimal online presence, says it supports the conservative values of the Republican Party, including lower taxes and opposition to abortion and LGBTQ rights.

Muslim Voices for Trump is also part of a group that calls itself "Pakistanis for Trump", which argues that Trump hasn't interfered in the south Asian country, as former President Barack Obama's administration had done, arguing it's another reason to vote for the incumbent.

Prior to being interrupted, Mears, from the RNC, told the group that the campaign's engagement with faith communities "has really been unprecedented, in the sense that, the Republican campaigns in the past used to overlook a lot of communities".

"The faith engagement across the board has been something that has been a part of a strategy from day one. It's really in our DNA, the values that folks who worship on a  weekly basis, tend to vote Republican more. However, I will say this, especially in the Muslim community, the Republican Party - has chose for a lot of reasons, just by the act of not showing up - to really neglect our Muslim brothers and sisters."

Mears said the party wants to "rectify that".

"My hope is that after we win, in just 20 days, that we can continue to build these bridges and roads."

According to the Centre for American Progress, though there is a perception that Trump's administration has helped religious communities, it has only benefited privileged white evangelicals and "the reality is that many of its policies have harmed all religious communities - particularly religious minorities".

The FBI reported that hate crimes in the US reached a 16-year-high in 2018, one year after Trump took office.

Most Muslims in the United States are vehemently opposed to Trump. But according to a survey conducted by the Institute of Social Policy and Understanding (ISPU) earlier this year, approval of Trump's job performance among Muslims increased from 13 percent in 2018 and 16 percent in 2019, to 30 percent in 2020.

When they were able to speak on the call, several reiterated Trump's touted "ability to deliver" and "for having the guts to say whatever he wants to say".

They also repeated the Trump campaign's talking points about Joe Biden's "ineffective" four decade-plus record in office as well his purported endorsement of socialism, on repeat.

Biden has repeatedly clarified he is not a socialist.

"There are lot of things that I don't like, but the majority- whatever he has promised - he [Trump] has delivered for the American people," Parvez Riaz, a Trump supporter said.

According to Pakistanis for Trump, who also helped organise the event, there were around 100 people on the call. But one activist who had led the disruption told MEE that there were no more than 50 on the call overall, with "maybe half of us being trolls".

Following the call, Pakistanis for Trump congratulated the effort on their private Whatsapp group but also lamented the Zoom call disaster.

"An amazing display of who we really are. Great effort overall. Next time around try to rehearse and do not invite officials without a full command on the Zoom event. I have hosted numerous Zoom meetings and this sort of chaos was never an issue. However, salute to organisers for their hard work," a Trump supporter on the group said.

The Trump campaign did not respond to MEE's request for comment.