A day after Defence Minister Moshe Yaalon encourages Israeli officers to speak their minds, Netanyahu calls him in for meeting On Sunday, Yaalon delivered a speech to senior officers in which he encouraged them to "continue speaking your minds".

"Do so even if your remarks aren't part of the mainstream, and even if they are at odds with ideas and stances held by the senior command or political echelon," Yaalon said.

His remarks were perceived as a public show of support for Major General Yair Golan, deputy head of the armed forces, who on the eve of Holocaust Remembrance Day earlier this month made remarks comparing contemporary Israeli society to Nazi Germany.

Yaalon had stood up for Golan, stressing that military commanders should not only "lead soldiers into battle," but also teach them "values, with a compass and conscience".

Netanyahu criticised the deputy chief of staff's "outrageous" remarks as "utterly mistaken and unacceptable," adding, however, a few days later that "the affair is behind us".

After Yaalon's speech, sources described by Israeli media as "close to Netanyahu" said the premier was surprised his defence minister was raising the issue of Golan's speech again, and Netanyahu summoned Yaalon to a meeting on Monday.

A statement released by Netanyahu's office late on Sunday reiterated that Golan's comparison was an "inappropriate remark" that harmed Israel internationally.

Following the Monday meeting, the offices of Netanyahu and Yaalon issued a joint statement saying the two had clarified issues.

"There is no dispute, nor was there ever one, that the army is subordinate to the political echelon, and officers are free to express their opinions in the relevant forums," the statement read.

The military establishment has been taking an active stance in publicly defining the parameters of morality amid a wave of Palestinian violence, at times to the chagrin of right-wing ministers and lawmakers.

Since October last year, 204 Palestinians and 28 Israelis have been killed, according to an AFP count. Most of the Palestinians killed were allegedly carrying out knife, gun or car-ramming attacks, according to Israeli authorities.

And the top brass, as well as Yaalon, strongly condemned Elor Azaria, a soldier standing trial in military court for shooting dead a prone and wounded Palestinian assailant, even before the trial began.

Right-wing politicians, including the Education Minister Naftali Bennett, defended the soldier, saying "he is not a murderer," while thousands of Israelis marched in support of him.

Ben Caspit, a columnist for the Mariv newspaper, called it a "cultural war" at the centre of Netanyahu's government - one of the most right-wing in Israel's history.

"This is war of the few against the many. Yaalon has been standing almost entirely alone in the fray," he wrote. "Prime Minister Netanyahu, his ministers, and almost all the Likud MPs are facing off against him."

Political calculations have also fed the row - Israeli media have speculated that Yaalon could be planning to leave Likud and form his own party.

Netanyahu is also reportedly in negotiations with two prominent opposition leaders about joining his government, which has only a one-seat majority in the 120-member parliament.

Israeli media have speculated that Netanyahu might offer up the defence ministry portfolio to entice either right-wing former foreign minister Avigdor Lieberman or Labour Party leader Isaac Herzog into government and secure a larger majority.

Inside Israel
Israeli opposition leader Gantz vows to annex Jordan Valley if elected PM
Inside Israel
Netanyahu appoints ministers to portfolios he was forced to resign
Inside Israel
‘We will only be moved as bodies’: Israel and Bedouins face off in the Negev 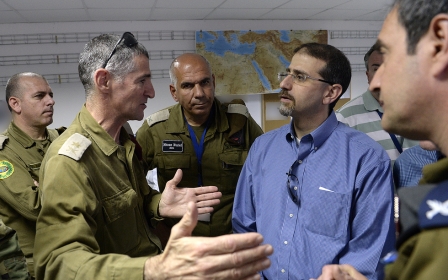