In the strategic region of the West Bank, Palestinians say they've been shunned from their land while Israel lets settlers 'run free' 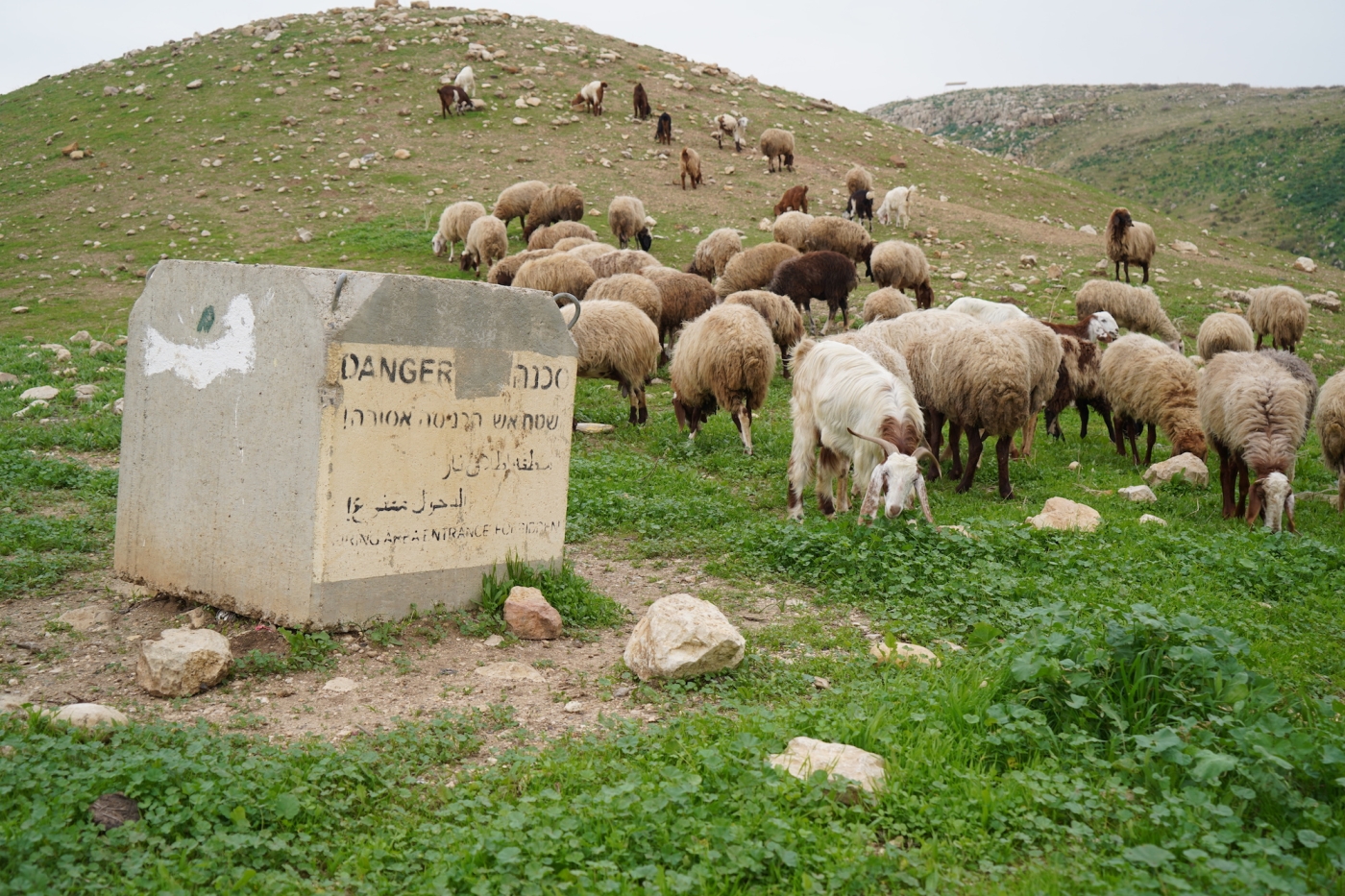 It had been three weeks since Moayad Daraghmeh had surveyed his plots of land in the sprawling northern valley on the outskirts of Tubas, in the northern occupied West Bank.

He was in a hurry to get to his land, when Middle East Eye met him on a cold winter day in the pick-up truck of local activist Motaz Bisharat.

The last time Daraghmeh went to his land - 47 dunums (4.7 hectares) which he shares with four family members - he had planted the fields with wheat and bulgur.

In the three weeks since, a lot had happened. Israeli military forces had declared vast swathes of the valley closed military zones, and soon after that, Israeli Defence Minister Naftali Bennett had declared even more land, including Daraghmeh’s, as new Israeli national parks.

He was eager to check in, and make sure that nothing had happened to his newly planted fields.

But by the time he arrived, it was too late.

“Stop, stop! Right here,” Daraghmeh instructed to Bisharat, as the truck bounced up and down on the rugged pathway, passing a white and green marker, newly painted on a boulder to signify that the area was an Israeli nature reserve.

Daraghmeh cursed, as he pulled out his phone and began to take pictures of his newly planted field, now overrun with tractor marks.

Breathless, Daraghmeh took off into the field and called to the others behind him. “Look, look! The leaves are turning yellow, you can see that he sprayed some sort of chemical to kill the crops.”

“I knew he had done something, I had a feeling,” he told MEE.

The culprit Daraghmeh referred to was a settler who he said had built a new illegal outpost last year on the hill nearby, and had been terrorising local Palestinians ever since.

“You see? The Israeli government comes and says these lands are closed zones, and ‘nature reserves’, and are therefore off limits to Palestinians,” he said, exasperated.

“But they let the settlers run free and destroy the land that they claim to be saving with their ‘reserves’,” he continued, as his shaking hands struggled to light his cigarette.

All signs point to annexation

When Israeli defence minister Naftali Bennett announced last week that, for the first time since the Oslo Accords were signed in 1993, Israel would be establishing seven new nature reserves in the occupied West Bank, his decision was met with outrage from the Palestinians, but little surprise.

‘We are no longer allowed to cultivate [our land] if it’s declared as a nature reserve ... In essence, it means Palestinians out, Israelis in’

Bennett, the ultra-nationalist leader of the “New Right” party, is up for re-election in March, and is depending on his right-wing, pro-settler base to turn out for the vote.

The decision came just one week after he announced that Israel was “waging a war” on Area C in the West Bank, and was embarking on a campaign to develop settlement expansion, and increase Israeli control over the area.

“Judea and Samaria have natural sites with amazing views. We will expand existing sites and develop new ones,” Bennett said on 15 January.

He went on to invite all Israeli citizens to “get up and walk the land, to tour Judea and Samaria, hike, discover new things and to continue the Zionist enterprise.”

While it remained unclear if the new nature reserves would ban Palestinian visitation to the sites, the local landowners say they’ve already received orders from the military to stay off the land.

“As far as Israeli law goes, even if we as Palestinians may hold the deeds to the land, we are no longer allowed to cultivate it if it’s declared as a nature reserve,” said Bisharat, who heads the Jordan Valley unit of the Popular Committee Against the Wall and Settlements in the West Bank.

In the weeks leading up to Bennett’s announcement, Bisharat said the locals noticed a significant change in the area.

“The military began confiscating people’s tractors, kicking us out every time we came to harvest the land, and stepped up their raids on the villages and communities in the area,” Bisharat told MEE.

Three weeks ago, Bisharat said the military, which already uses much of the valley as active training zones, posted flyers at the entrances to the 18 villages and herding communities around Tubas, notifying residents that their lands were being confiscated by the military, and being turned into closed military zones.

“Now it is clear that they were paving the way for Bennett’s decision,” he said.

“Once a piece of land becomes a closed military zone or a nature reserve, there’s nothing we can do … In essence, it means Palestinians out, Israelis in.”

A tried and true process

At least four of the locations - Rotem-Maskiot, named after two neighbouring settlements, Wadi Faraa, Wadi Malha, and the southern Jordan River area - are located in the Jordan Valley of the occupied West Bank.

The Jordan Valley’s strategic geographical location, vast swathes of open fertile land and unparalleled water supply have made it a target of right-wing Israeli government and the settlement movement for years.

On Tuesday, his main rival Benny Gantz vowed to do the same if he is elected prime minister in the 2 March election.

Around 25 Palestinian towns and villages and approximately 300,000 Palestinians live in Area C which, like the rest of the West Bank and East Jerusalem, has been occupied by Israel since the 1967 Middle East war.

Around 325,500 Israeli settlers in 125 settlements and outposts, built in contravention to international law, also live in Area C.

For the residents of the valley, the establishment of the new national parks is just a means to achieving that goal.

“It’s obvious that Israel does not actually care about preserving the land,” Bisharat says, pointing to large craters in the ground and the skeletons of burnt military jeeps - remnants of Israeli military training in the area.

“If they did, would they use the land for practice explosions, for building walls, and for letting settlers poison the crops with chemicals?” he asked. “No, of course not. But it’s not about their supposed love of nature. It’s about taking over more Palestinian land.”

Bisharat’s views are widely echoed by Israeli and Palestinian human rights groups, who for years have argued that the designation of national parks in the occupied territory is just one of the many tactics employed by Israel to confiscate more land.

“Lands on the occupied territories have systematically been seized on various pretexts, in order to prevent the Palestinians in the West Bank from using them, and to undermine any Palestinian territorial contiguity,” Peace Now said in a 2007 report.

“One of the means employed by Israel in order to annex lands was to declare broad tracts as nature reserves, and to include them in land blocks that the planners had intended for the settlements,” the report stated.

According to Peace Now, the process goes like this: First, Israel designates an area as a nature reserve; the state subsequently bans any Palestinian construction or harvesting in the area; and eventually, a settler outpost pops up in the same area.

It’s a process that residents of the Jordan Valley know well, as they’ve seen it happen countless times before.

In addition to the four new designated nature reserves in the Jordan Valley, there were at least three existing reserves in the area around Tubas. Every single one, Bisharat told MEE, now has either a settler outpost or military base built on it.

He references the case of Umm Zuka, an Israeli nature reserve in the northeastern Jordan Valley.

“One and a half years after the nature reserve was established, a settler outpost was built, and they were given electricity and water by the state,” he said.

One of the newly planned nature reserves is being established around the Maskiot settlement, which initially was a military base in the area, and according to Bisharat is located in a military firing zone.

“Whether they start as nature reserves or as closed military zones or bases, the land always ends up being used for the same thing: settlements,” he said.

‘There’s nothing left for us’

Just across the road, in the valley below the Maskiot settlement, is Khirbet Ein al-Hilweh. It’s one of a dozen herding communities in the Wadi Malha area - soon to be one of the new nature reserves.

Life in this small community - numbering around 55 people, most of them minors - has felt the impact of Israeli occupation.

“They haven’t left a single stone untouched,” 53-year-old Qadri Daraghmeh told MEE from his family’s tent in the village.

“For years they have been placing more and more restrictions on us, because of the military bases and the settlements, and now the nature reserves,” he said.

A few years ago, Daraghmeh said Israeli forces destroyed the pen his brother had been using to house his cows on the outskirts of the village.

“They confiscated his cows, saying it was a nature reserve and it was illegal for us to be there,” he recounted. Two years later, he said, the family found settlers in the area, raising their own livestock on their new outpost.

Daraghmeh accused Israel of applying double standards when it came to the rules and restrictions for living on a nature reserve.

For example, Daraghmeh said, the community was not allowed to have its own water lines or electricity networks due to restrictions imposed by Israel, and therefore had to rely on solar panels donated by international organisations.

“But the settlements across the road, they are fully equipped with running water and electricity. They can live and build on closed military zones and nature reserves,” he said, “because they are Israeli, not Palestinian.”

The consequences have been tragic for Daraghmeh, whose son was killed in 2008. He was out grazing livestock at the time, when he stepped on an unexploded landmine left by the Israeli military during their training activities.

“This happened in the same ‘nature reserve’ behind us,” he said.

In recent weeks, Daraghmeh said, the families have been forced to take their livestock out to graze at night because of new restrictions placed on them by the Israeli military. Many of the young men who take the sheep for grazing have been arrested and held for hours by the soldiers.

With the new nature parks in Wadi Malha and Maskiot-Rotem, Daraghmeh said the community has officially run out of places to graze their animals, and to live.

“They haven’t left a single patch of soil for the Palestinians,” he said. “This was the last area left that we could graze our sheep. There’s nothing left for us.”

When asked about Bennett’s promises to “wage a war” for the Israeli takeover of Area C, Daraghmeh scoffed.

“They have been waging this war for a long time! It’s not something new that they have just started,” he said.

“They talk about annexation as a concept, but here on the ground, it’s already on its way to completion.” 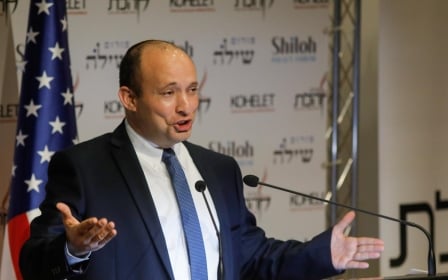 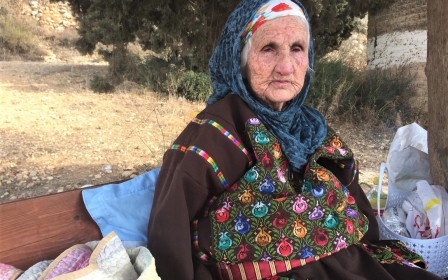