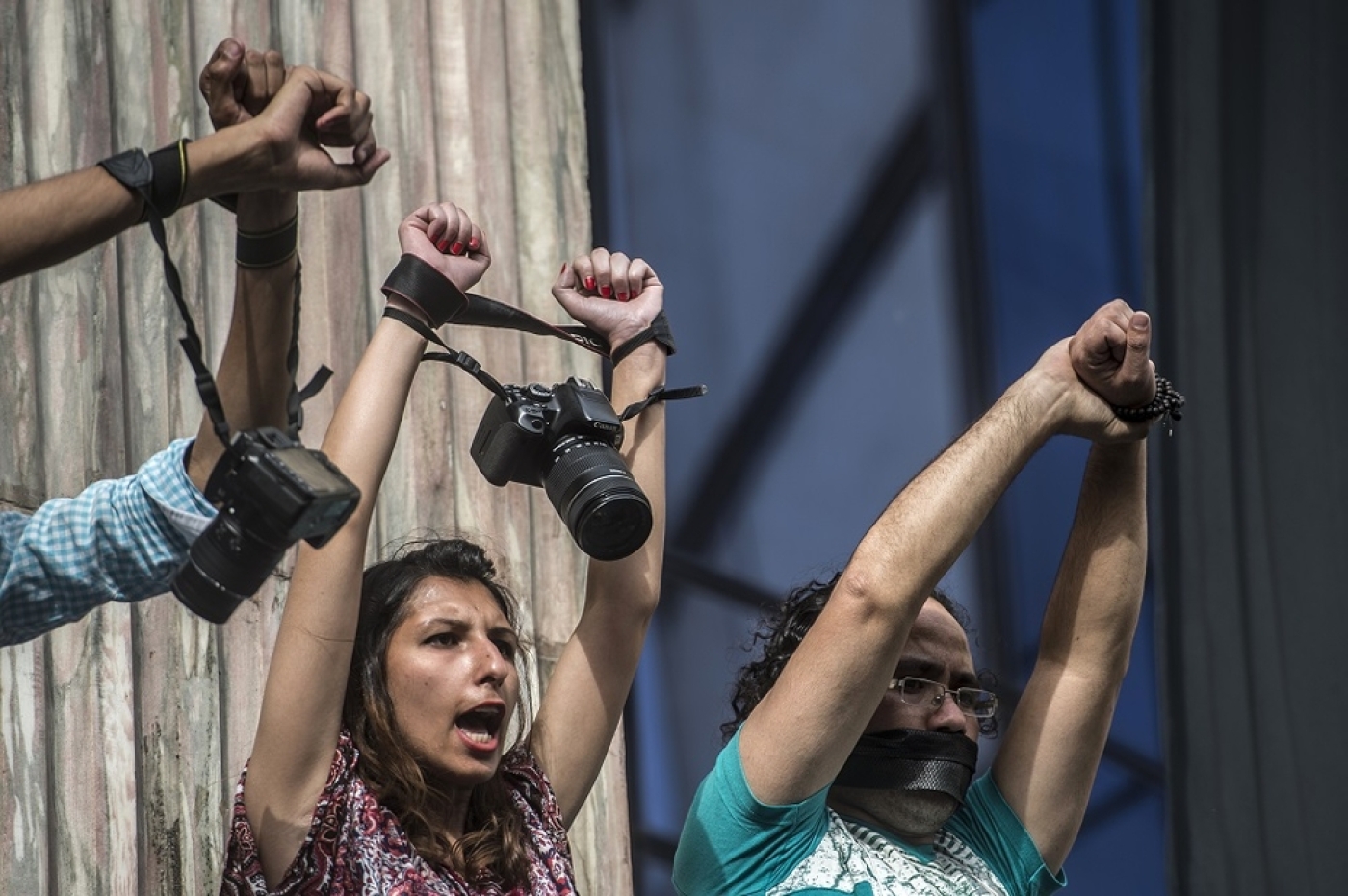 CAIRO - More than 2,000 journalists are set to cover Egypt's presidential elections later this month, but many believe that even a state-issued permit will not guarantee them immunity against a widening crackdown.

Abdel Fattah al-Sisi is to contest the presidential election virtually unopposed, facing one other candidate - the leader of a pro-Sisi party who has already expressed support for the incumbent to continue in his job.

The build-up to the 26-28 March elections has been marred by what journalists call intimidation tactics used by state authorities to stifle any voice deemed critical to the state.

Several Egypt-based reporters declined to speak to Middle East Eye out of fear of retribution. Those who were willing requested anonymity for fear of prosecution.

In a televised speech on 2 March, Sisi announced that any insult by a media organisation of the army or police was defamation of the country and therefore treason, rather than freedom of opinion.

Criticism of security institutions is considered off-limits in Egypt.

Rights groups say there is a growing crackdown against political opponents and media personnel ahead of the vote.

Why we should speak up for Egypt
Khadidja Nemar
Read More »

Commenting on the prosecutor's statement, a foreign freelance journalist who has been covering Egypt for three years told MEE: "The general prosecutor's recent statement is the latest in a string of warnings and threats directed towards the media over the past few years."

"This one is perhaps the most concerning because it was from a very high ranking and powerful official," added the journalist who wished to remain anonymous for fear of being prosecuted.

"Often the warnings are implicit and subtle, but with this statement, we can make no mistake that what we write and say will be monitored."

Under a law passed in December 2016, Sisi has been choosing members of the so-called Supreme Council for the Press, a body which has the power to fine or suspend publications and broadcasters and give or revoke licences for foreign media.

Journalists in Egypt told MEE that they have found themselves being selective about the topics they cover in an attempt to protect themselves and the people they speak to.

"The most difficult thing [for a journalist in Egypt] at the moment is that people don't want to speak on the record about many issues because they fear the repercussions," said a foreign journalist.

"Worrying that one of my sources might be harmed for speaking to me keeps me awake at night. It doesn't take much for someone to disappear or get tortured these days.

Worrying that one of my sources might be harmed for speaking to me keeps me awake at night. It doesn't take much for someone to disappear or get tortured these days

"I will sometimes avoid covering certain stories because speaking to someone about that topic might endanger them."

An Egyptian woman, who told the BBC in February about the torture and forced disappearance of her daughter, was arrested by Egyptian authorities on 2 March on suspicion of spreading false news after her daughter Zubeida appeared on an Egyptian talk show denying she had been detained or mistreated in any way.

The lengthy BBC report about torture and forced disappearance in Egypt caused an outcry and prompted state authorities to launch a tirade against the British corporation and its Cairo correspondent Orla Guerin, accusing them of "preconceived bias to portray an offensive image of the conditions in Egypt".

Sabagh's fiance wrote in a Facebook post that the two journalists who work for Raseef22, a Lebanon-based website, were arrested while doing a report about the extension of the tram service into Egypt's second largest city.

Meanwhile, Egyptian prosecutors requested on 3 March a death sentence for Mahmoud Abou Zeid, an Egyptian photojournalist known as Shawkan, who has been held in state custody for four and a half years.

Shawkan was arrested in connection with an anti-government protest in Cairo's Rabaa al-Adawiya Square in August 2013 and accused indiscriminately of charges that include murder, attempted murder and membership of the Muslim Brotherhood.

These arrests underline how field reporting has become dangerous amid an increasingly volatile atmosphere in a country that was awash with opposition media voices in the wake of the 2011 uprisings which unseated former president Hosni Mubarak.

According to a December 2017 report by the US-based Committee to Protect Journalists (CPJ), 20 journalists are languishing in Egyptian prisons on an array of charges, many of whom have been accused of spreading false news or collaborating with the outlawed Muslim Brotherhood group.

The current atmosphere in Egypt makes me rethink whether or not I should cover the elections, especially if it endanger people's safety

Meanwhile, more than 500 websites, including dozens of news outlets and human rights organisations, have also been blocked by the state, according to the CPJ. The blocked websites include Mada Masr, an independent news website, and international non-governmental organisation Human Rights Watch.

With the presidential elections looming, the latest moves by authorities have set alarm bells ringing at media institutions.

"The current atmosphere in Egypt makes me rethink whether or not I should cover the elections, especially if it endangers people's safety," said a journalist at the Cairo office of a leading foreign news agency.

"Journalists and even people in the streets are afraid to voice their opinions after they see that others have been landed in jail or put on trial for speaking their minds," the journalist told MEE.

"My news agency has developed a series of guidelines to try and reduce the risk reporters might face," added the journalist, while explaining that journalists without accreditation are not allowed to report on the ground.

Not all the journalists who are members of the Egyptian journalists' syndicate are allowed to report on the elections. In order to get authorisation, journalists must obtain a permit from the high elections committee.

Journalists working with state-owned media platforms have also faced a risk of getting caught up in the crackdown as well.

"I'm not sure if working for a state-run paper makes my job easier. I have to be extra cautious when covering anything, especially the elections," a reporter at a prominent state-run newspaper told MEE.

"A woman got arrested for reporting about the extension of the tram in Alexandria," said the reporter in reference to Sabagh. "This means we journalists are all at risk regardless of whether you report about a thorny issue or not.

"Simple professional reporting could be deemed a ‘threat to national security' from the authorities' point of view," he added.

Khairy Ramadan, a prominent journalist and media presenter who is known for being a staunch supporter of Sisi, was detained last week on charges of "defaming the police".

The incident followed his announcement on Egyptian state television that he had received a message from the wife of a police colonel complaining about the officers' salaries.

Ramadan was eventually released on bail, but his arrest was regarded by observers as a sign that state authorities had embarked on a zero-tolerance policy which would encompass their loyalists in the media as well.

All the journalists interviewed by MEE recounted different tactics they were planning to adopt to avoid risking their safety while covering the elections.

"I'll try to avoid using my camera. Police usually get alerted once they see one," added the state-run newspaper reporter.

"I will also try to fit in with crowds, rather than stand out as a journalist, or security personnel may simply ask me to leave during my coverage," added the journalist.

"This means I won't be taking down notes nor showing my audio recorder while doing interviews."