With over 10,000 people injured and more than 2,000 killed in Israel's latest offensive, Gaza's health care sector is struggling to cope Incubators designed for one are crammed with three babies at a time; operations are performed in pitch black hallways with mobile phones being held in open chest cavities to give surgeons enough light to operate; patients who survived the acute stage, are succumbing in post-operative care because the system cannot cope; the morgues are overflowing with dead bodies piled unrefrigerated in a corner and the bodies of dead children are being stored in ice-cream freezers. These are the conditions under which doctors and nurses are working in Gaza.

Norwegian doctor Mads Gilbert was one of them. When a body is hit by a swarm of metal fragments travelling at very high speeds tearing into the skull, chest and abdominal cavities, where they cut open vessels and damage organs, it becomes “detective work” to establish where the bleeding is coming from, and what needs immediate repair or bleeding control.

These were the types of injuries Gilbert saw, and there were hundreds of them. In a single day, 30 July, after the Shejaiya market was attacked, almost 200 patients were admitted to al-Shifa hospital within just four minutes. Even in peace time, with full logistical and technical support, a total of 10,000 injured patients would be considered a disaster.

But even before the bombardment started the medical system in Gaza was on its knees after almost eight years of siege with not even the most basic medical equipment and medicines to cope with a population of 1.8mn. “There is no doubt that patients have died that could have been saved if it was not for the lack of equipment, supplies, drugs, medical instruments and safe evacuation”, Gilbert said.

Other medical disasters were preventable too, particularly those resulting from Israel’s bombing of Gaza’s only working power station, which has resulted in between only two and four hours of electricity a day.

Al-Shifa ran on generators, but they cut out several times every hour. When the back-up battery failed, the whole heaving scene of humanity and distress, with doctors desperately battling to save lives, was plunged into complete darkness.

They don’t even have torches when they do surgery under these conditions so they are really challenged in their capacity to improvise. Gilbert recalls how “a surgical team held mobiles phones in a chest cavity so that the surgeon could see what he was doing. It was dim, unsteady light, but it was either that or having to stop mid operation.”

Lack of theatre space has seen multiple patients being operated on at the same time in the same theatre, breaking all rules of operative sterilisation. Even beds are in such short supply that surgeons are forced to undertake complicated procedures while their patients lie on stretchers on the floor, the Gaza Ministry of Health said.

Everyone who worked in the system knew what was going to happen, before it happened. Gilbert has been going in and out of Gaza for the last 15 years. But foreknowledge did not make it any better. A few days before the war even started, al-Shifa hospital shut down all elective, planned surgeries and began to perform only lifesaving emergency surgeries. This means that all chronic conditions like cancer, orthopaedic problems, and coronary artery problems, were no longer being treated with surgical therapeutic means.

The immediate result of this was that babies were being born at home. Given that there are 25,000 pregnancies in Gaza at any one time, there were between 120-150 deliveries at home every day, because it became too dangerous to travel to hospital during the air raids. “Too few people pay attention to this but it is extremely important that 1.8 million people are being denied access to primary health care and elective hospital care due to the siege and the attacks”, Gilbert said.

Gilbert does not consider himself a hero for his work in Gaza. “The heroes are in Gaza” he declares, referring to his colleagues who have worked without pay for over four months and who themselves have become the targets of Israeli missiles on hospitals and ambulances.

But Gilbert keeps on going back. Why?

“Once you get to know the Palestinian people and their history you cannot leave. It’s so touching, so important and so captivating in many ways.”

Gilbert’s Middle East education did not start in Gaza, but began as he was poised to volunteer in a Kibbutz. Just before starting a friend told him about what the Palestinians were going through and Gilbert found himself instead opting to volunteer in Beirut and Palestine.

As a doctor, he says, he is obliged to side with his patients. "My patient is the Palestinian civilian population, and siding with them means to be active and not just to pay lip service." He advocates for the Boycott, Divestment and Sanctions movement and gives public lectures about Gaza.

As a native Norwegian he also feels an innate kinship with Gazans, stating that his small country of 5 million was “occupied by the Danes for 400 years, by the Swedes for 100 years and by the Germans for 5 years and we threw them all out, leading to the Norwegian mind-set (despite the pro-Israel government) that small nations have the right to be independent and not occupied.”

Gilbert considers aloud, “what would we have done if we had stayed occupied and marginalised and put into enclaves in our own country? Would we ever throw away the key? Would we ever give up our land? Would we ever say that we are waving the white flag and surrendering? No we would not. Like any occupied people we would cling to the hope that one day we would have justice and that’s why I’m engaged with the Palestinians.”

He sees no conflict in being a doctor and a political advocate, calling medicine and politics “Siamese twins”. He describes doctors as fundamentally concerned with the wellbeing of their patients in relation to their ability to access water, food, shelter and human security, factors which relate to the distribution of wealth and power, and which at their essence are political.

As far as a solution to the current crisis, Gilbert’s take is simple, “As a doctor I know that prevention is better than cure and the best prevention in Gaza is to lift the siege and stop the bombing. It’s as simple as that." 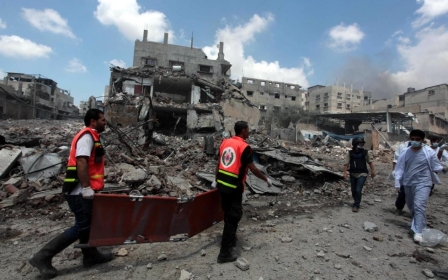 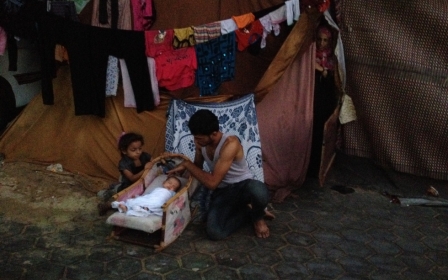 Gaza Under Attack
When the night falls on displaced Gazans