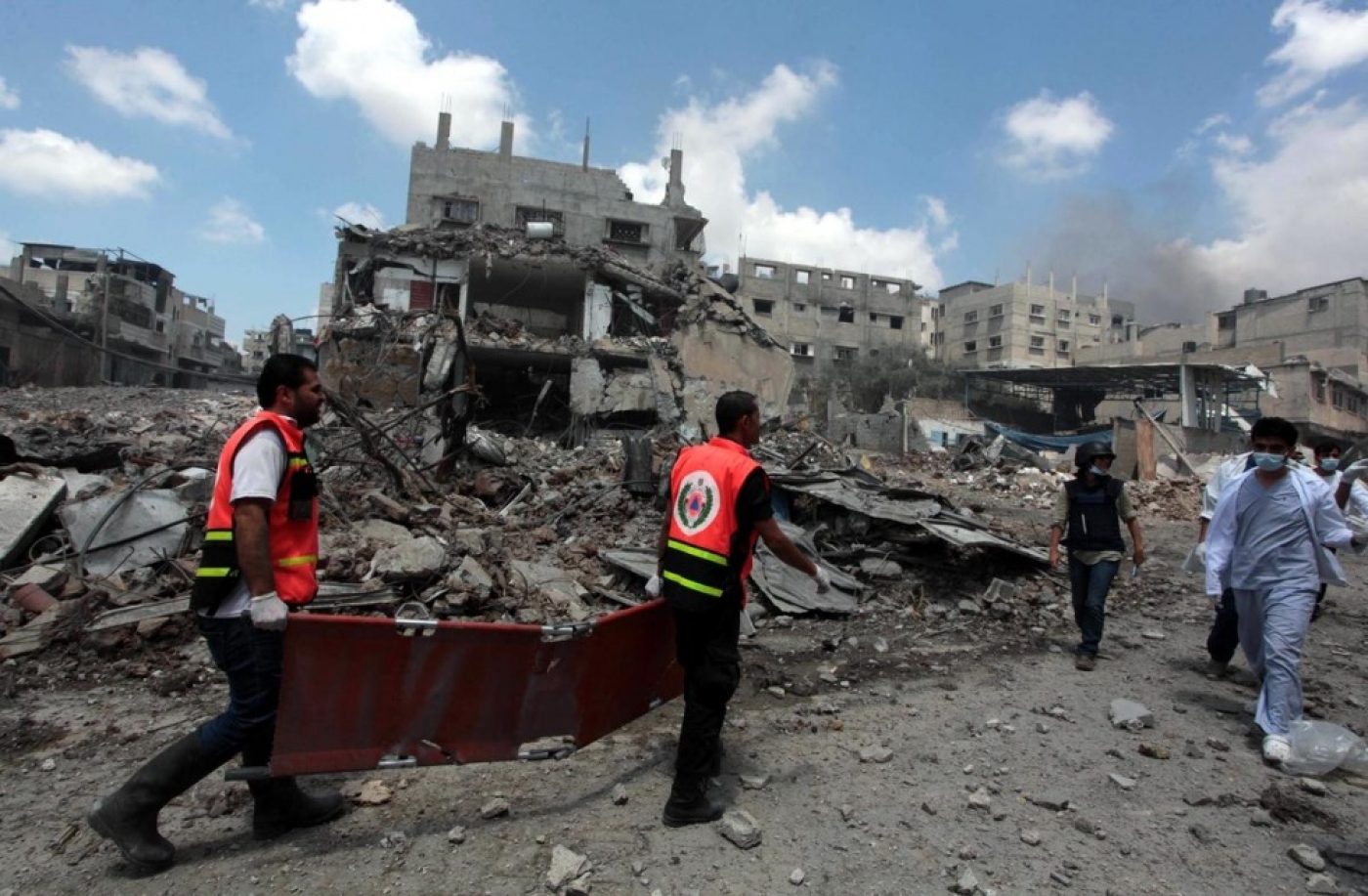 Ambulance crews not only treat the wounded, but recover the bodies of those killed in Israeli bombardments (AA)
By
Mohammed Omer

It has become the norm for Ayman Sahwan to round up injured civilians. It’s a job he has done for 15 years and continues to do.

Sahwan just received a signal from the emergency operator informing him of another Israeli air strike on Gaza City - an Israeli drone missile has slammed into another family home - so he runs now with his colleague to the ambulance.

“These Israeli ‘Knock on the Roof’ drone-missile warnings are injuring and killing so many people, demolishing homes and bringing the roof down on top of their heads” he says, driving toward Nasser Street area, in central Gaza City.

The ambulance arrives amid a mass of anxious people, waiting. Sahwan sees a man, his wife and children all wearing short-sleeve tops as if they had just been asleep in bed. Sahwan then sees the deep wound, about 10cms wide, in the man’s head.

“I’ve seen so much blood and injury lately, it doesn’t affect me anymore” he says, adding, “But I am still affected by witnessing the horror and terror in the people’s eyes and hearing the screams, cries and shouts of the children, women and men as they run from their beds and homes, some almost naked, to escape Israel’s missile attacks and death”.

Everyone is running everywhere and nowhere, because there is nowhere to hide. Every place is under threat of attack. The ambulances are a destination for many, but even the ambulances are not safe. For Sahwan, there is not much more he can do, other than bring the injured and dead to the already overcrowded hospitals in Gaza.

Sahwan acknowledged that his greatest fear is heading into the unknown. He knows that an Israeli missile has hit, but his real fear is that another missile will strike the location where he’s going, or even target the ambulance directly, in the same way that so many other ambulances have been targeted.

The red flashing lights of the ambulance won’t protect him - so he tries to work in partnership with another ambulance, as back up, for the task that lies ahead.

“Sometimes I feel the impact of the missile when it hits - but it’s too late to react or reverse”, he says.

He has gained a lot of experience doing this work. He’s familiar with the various types of missiles Israel fires at Gaza; the different sounds they make, the various pitches, and the timing between the F16 and drone letting lose their bombs, and the impact on their targets.

Like his colleagues he makes the rounds to all the hospitals in an attempt to respectfully match up ripped and shredded body parts left in the debris, rubble and scattered on the streets by Israel’s military. It’s important to put back the human body-parts that Israel blew up, so inhumanely.

“This is very common, as Israel uses lethal weapons which split bodies into even smaller pieces of burnt flesh, than in previous military strikes on Gaza”.

Human Rights groups’ familiar with Israel’s use of such weapons - including DIME (Dense Inert Metal Explosive) weapons - don’t need to inform or remind Sahwan about this. During his 24-hour shift, if he gets a chance for a break to eat or pray with his colleagues, they already know and discuss the symptoms they have witnessed first hand from such weapons, their impacts evident on the bodies of the people around them.

As they sit around the ambulances, next to the emergency operator, they talk about many topics, including food recipes and their families, to distract them from thoughts of the next calls that inevitably come in.

Sahwan is a father of 3 children who call him immediately everytime they hear of an attack involving an ambulance crew, just to make sure he is still alive.

When it was announced that Sahwan’s colleague, Fouad Jaber, had been killed by shrapnel and rubble in an Israeli air strike on Shujaaia, in the East of Gaza, which turned into a massacre, many calls from Sahwan’s relatives came in to check on him.

He tends to avoid too many phone-calls right now when he needs to focus on his work and tend to so many victims, injured or dead.

The calls he will always answer are those of his children, like the call he is taking now from his youngest daughter, 12 year old Shahd, who constantly worries about her father’s safety, wanting to know when he’s coming home.

Sahwan’s family knows his 24-hour shift is almost done. It’s early in the morning. Now comes his return journey back to Khan Younis in the south of the Gaza Strip. This journey is another risk which scares his children. He does not go home by ambulance, which further maximises the dangers of the journey.

“Take care of yourself daddy. I need you!” says Shahd.

When Shahd calls her father, he tries not to contemplate that something might happen to her and the rest of his family. His family are all familiar with news of ambulance crews being held hostage and injured by Israeli troops, while others are arrested and detained.

“Sometimes I fear not getting home to my children” he says.

But when morning comes, he’s relieved that at least that shift is over and his worries, for now, will be less when he gets back to his family in Khan Younies, and they are all together again.

“I always worry about what might happen to my wife and children, if I’m killed in an Israeli air-strike”.

The Fire department is in no less danger, the firemen all have their share of concerns and suffering. If Sahwan needs to evacuate victims from homes bombed and burnt by Israeli missiles, he must first wait for his Fire-Department friends to come and contain the fires.

Fire-fighting under gunfire: Another difficult task

Ahmed Joudeh, a 24yr old fire-fighter recalls when Israeli warships bombed their fire department building at Gaza beach which they had to evacuate and then run to help fishermen and their boats which were burning. “We were trying to put out the fishing-boat fires and then another Israeli navy missile struck nearby—we tried to keep away, moving into another fishing boat, but we were hit again, and again” he says.

Meanwhile, Omar Abu Owdah, 44 years old, and in charge of tonight’s shift, says it is understood why Israel targets Fire Departments or any public emergency service departments, though they are so clearly marked and visible.

As father of 9 children between 2-16 years, his family is constantly trying to reach him. He says it’s only in Palestine where Emergency First Responder teams are targeted by Israeli gunfire.

This is a difficult aspect of his job, teaching new young recruits who are replacing those who have been injured or killed by Israeli attacks. It’s not easy to explain to them why they are now so often the target.

In total, seven Palestinian ambulance medics were killed and 16 others were injured since the offensive began three weeks ago, according to the health ministry. One of the last ones to be killed in Khuzza, south of the Gaza Strip, was 32 year old Mohammad Alabadla.

Another, Hamed Al Borai, was killed while inside an ambulance when it was bombed by Israeli tank shells in Beit Hanoun. He was burned inside the ambulance while others inside sustained critical wounds.

The health ministry says such attacks go against the fourth Geneva Convention and are in violation humanitarian international law.