JERUSALEM - The streets of East Jerusalem are ringing with sound. Not, however, with those that have all too often been heard in the last week: stun grenades, fireworks, stones smashing against road signs.

East Jerusalem is today happy. Hundreds of people have gathered at Lion's Gate in the burning mid-afternoon sun, dancing and singing to celebrate their victory in the protests that have shaken this city over the past week and a half.

The victory seemed scarcely believable to those who were assembled on the steps nearby, being sprayed with water by mischievous children in an attempt to stay cool.

Some held boom boxes aloft as crowds danced to the music. Plates of baklava were passed around. There was even a foam party.

"There is no sweeter feeling than this," Hoda, from Jerusalem, told Middle East Eye. "Our mosque is open to us, and we have won."

"It is a victory from God," Moath, also from Jerusalem, said. "We have won a great victory now that we are able to enter Al-Aqsa."

The scenes of jubilation started last night, when thousands gathered at the gate to witness the last of the security measures that Israel had imposed after a deadly 14 July attack be dismantled and carted off on the backs of lorry.

A huge Palestinian flag was hung from the walls – a rare sight in the city that Israel considers its undivided capital.

At dawn prayers, the scene was quieter, with a small crowd sweeping in with the mufti of Jerusalem, chanting "Allah akbar!"

He addressed the worshippers, telling them: "This has been about entering Al-Aqsa mosque with freedom, without checkpoints.

"We have demanded that everything is returned to as it was before 14 July, and we are inside now and checking the mosque. Until we are sure, we will pray outside. It is very important to be definite."

There could be new things inside, new cameras, and this will not be acceptable to the people of Jerusalem

Then, by mid-morning, at a news conference with other Islamic authorities in the city, the decision was announced – that the mosque would be open again from afternoon prayers.

"Of course we are happy today," Majd, from Ras al-Amoud, said. "This is a victory for the people of Jerusalem, and for Palestine in general, and it has come from our leadership – the sheikhs, and our imams, and the waqf."

He said that he was worried, however, about what the Israeli authorities had been doing inside during the time that Palestinians had been barred, and then chosen to boycott the mosque.

"There could be new things inside, new cameras, and this will not be acceptable to the people of Jerusalem."

Hutta, where the crisis began with the shooting of two Israeli officers, was the last gate to reopen. Thousands of Palestinian protesters on Thursday had gathered to demand access.

Movement of the people

The victory for Palestinians is as rare as the movement that produced it.

The grassroots protests, organised and focused by the city's religious leadership, seemed to take everyone by surprise, leaving the main diplomatic players off balance, and forcing the Israeli government into a climbdown that has enraged Benjamin Netanyahu's right-wing coalition partners.

"I'm optimistic concerning the future that this potential will be the main container for the continuation of this intifada.

"At the same time, the Palestinians who have been protesting have given a message to the Palestinian leadership: 'be careful'," he told Middle East Eye.

This intifada the masses were the advanced guard, and the leadership were running behind

Although Jerusalem and the West Bank saw two days of serious unrest on Friday and Saturday, and other limited clashes broke out after evening prayers on a number of days, the protests have been remarkable for the fact that they have been led by an older generation that has actively worked to keep them calm.

At times of friction, older men often stood between police and youth, working to diffuse conflict. Religious figures used their sermons to call for peaceful protest, and actively hushed and sat down younger men who wanted to stand and chant during the sit-ins.

The example of the protest seems to have inspired the city's Palestinians in their struggles going forward.

"Our struggle is with the occupation, the Zionist and military occupation of our city," Majd said, adding that he feared the Israelis wanted to take over Al-Aqsa.

"Our struggle will continue until we have completely ended the occupation of Jerusalem."

The Israeli government has consistently denied that it has any intention to change the status quo at the Noble Sanctuary, which Jews call the Temple Mount.

"I think until now the Israelis can't read the writing on the wall," Jiddah said.

"They have to understand that they are dealing with a nation that has legitimate rights, that we got fed up of the occupation, of the daily humiliation, that we can't stand anymore living under the occupation."

In a sign of just how jubilant this victory is making people here, he expressed the hope that these protests were the first stage in a wider movement that would bring Israelis and Palestinians together in a joint effort to end the occupation.

"I feel pity for the sufferings of both Israelis and Palestinians," he said.

"I'm hoping that more and more Israelis will get the message, and I am looking forward to seeing 400,000 Israelis coming out on the streets of Tel Aviv and saying, 'enough'." 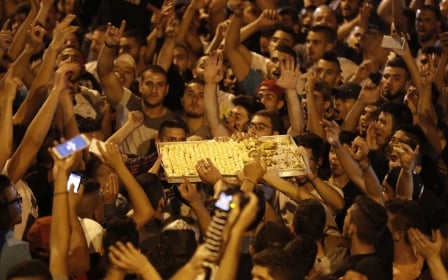