‘Nothing to lose’: Palestinians set out to sea in attempt to break Gaza blockade 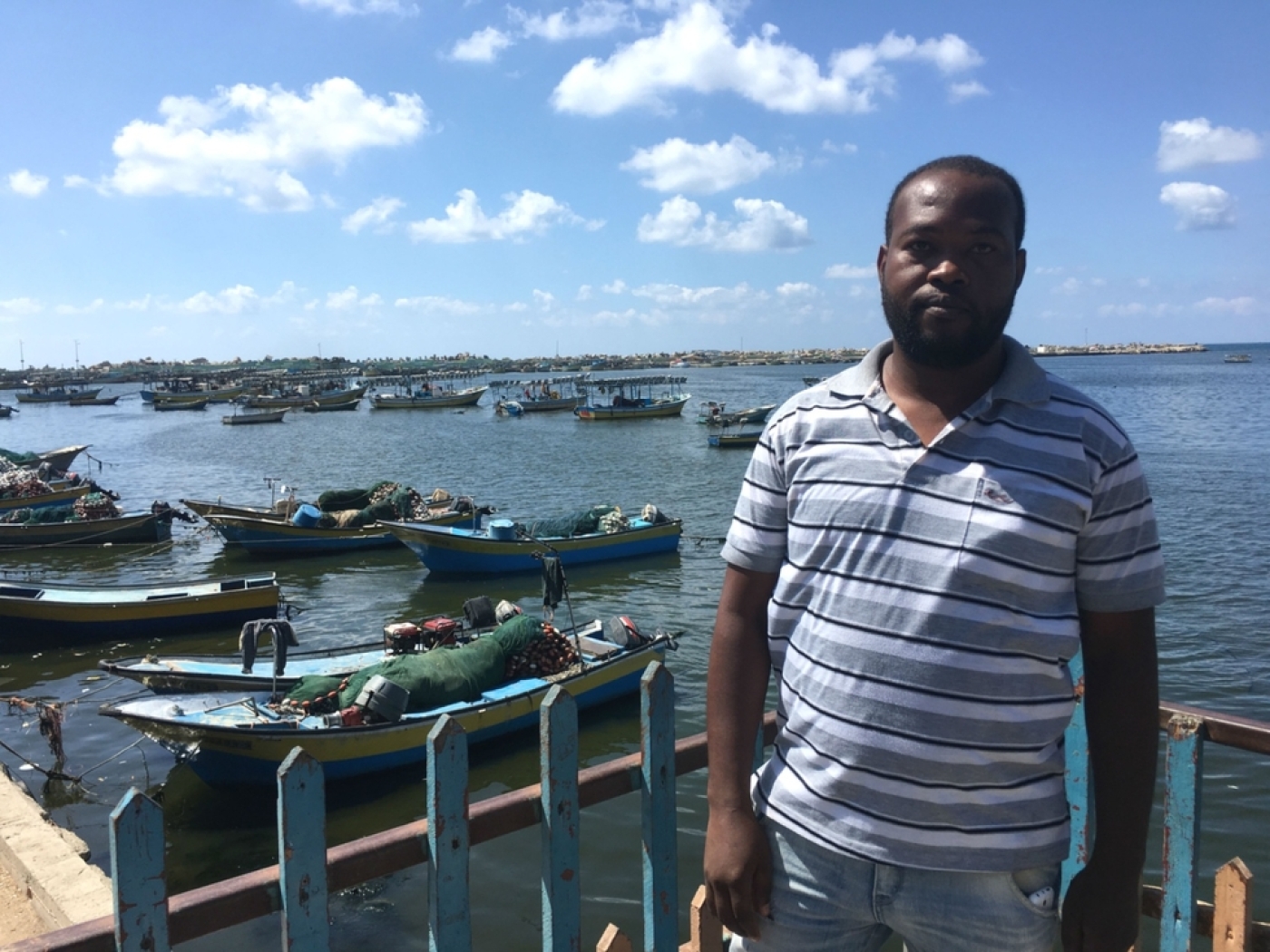 Mohammed Arour, 33, is one of a number of sick and injured Palestinians who have boarded boats in recent weeks in an attempt to break the Israeli-led siege on Gaza (MEE/Maha Hussaini)
By
Maha Hussaini

GAZA CITY, Gaza - Trapped inside 365 square kilometres with few opportunities of escaping the 11-year siege, Palestinians in the Gaza Strip have turned out in large numbers at the fence separating the small coastal territory from Israel in recent months to protest the abysmal humanitarian conditions.

A smaller, yet equally determined number of Palestinians, meanwhile, have set their sights westwards, towards the Mediterranean Sea, as their only hope for salvation.

While international activists have challenged the Israeli sea blockade from outside over the years, Palestinians have begun attempting a similar feat in the opposite direction.

University students, individuals injured during the recent months of protests or previous Israeli military offensives, and terminally ill patients seeking treatment abroad, have boarded boats leaving Gaza’s shores in the hope of avoiding Israel's naval forces and arriving in Cyprus some 400km away. All have been turned back.

But the poor living conditions in the small Palestinian territory, where medical shortages have only become more acute in the midst of the Israeli army’s repression of large-scale protests, have only left Palestinians more determined to seek a way out.

‘They left us with no choice’

Palestinians in the coastal enclave are preparing to welcome a group of four ships - the al-Awda (The Return), Freedom, Mairead and Falestine - in coming days, despite Israel’s repeated declarations that it would prevent international flotillas challenging the blockade from reaching the Gaza Strip.

The vessels - part of the Freedom Flotilla Coalition, which has sent more than 30 ships towards Gaza since 2008 - arrived on Monday in Palermo, Sicily, after first setting sail from Scandinavia two months ago, carrying much-needed medical supplies to the Palestinian enclave where more than 16,000 have been wounded since the beginning of the Great March of Return on 30 March.

With Israel announcing earlier this month that it was shutting down Gaza’s only commercial crossing except for the transfer of Israeli-approved humanitarian goods, and progressively restricting the designated fishing zone down to three nautical miles off the coast, the humanitarian situation has only become more urgent for Gaza residents.

'We tried to win our basic rights using [Israel's] legal ways, but they have always dealt with us as if we were subhuman'

- Mohammed Arour, a passenger on the Freedom Boat 2

In parallel with the efforts of the Freedom Flotilla, Palestinians trapped in Gaza have also sought to break the siege, in the hope of receiving medical treatment abroad.

Mohammed Arour, 33, was injured during Israel’s Operation Protective Edge when an Israeli drone targeted his house in the Nuseirat refugee camp in the central Gaza Strip on 22 July 2014, killing two members of his family and injuring 40 others.

Arour was left with severe damage to his bladder that no hospital in Gaza was equipped to treat. Despite spending a month in Saint Joseph Hospital in East Jerusalem - a hospital stay in occupied Palestinian territory that necessitated an Israeli permit for Arour to be allowed to leave Gaza - the Palestinian man still needs to undergo several operations.

“I have been living on painkillers for the past four years, and my body now rejects all kinds of drugs,” Arour told Middle East Eye. “I am hopeless. No matter how many times I try to leave Gaza for treatment, the Israeli authorities always deny me permits.

“Once I heard the registration for the Freedom Boat was open during Ramadan, I immediately registered, as this was the only hope left for me to leave the Strip and receive proper treatment.”

Arour was among eight Palestinians who attempted to break the Israeli blockade by setting sail aboard the Freedom Boat 2 from Gaza on 10 July.

The Freedom Boat 2 was the second of two attempts by Palestinians to breach the Israeli blockade by sea since the Great March of Return protests began.

“They [the Israelis] left us with no choice. We tried to win our basic rights using their legal ways, but they have always dealt with us as if we were subhuman,” Arour explained.

“They approached our boat and asked us through megaphones to sit on the ground, threatening to open fire if anyone moved,” he said.

“Four warships carrying around 40 soldiers then appeared. They searched us and dragged us to their ships with our feet cuffed, and then took us to the Ashdod seaport" in southern Israel, he added.

Israeli soldiers scolded the passengers, Arour said, accusing them of purposefully “choosing the day of the France-Belgium match in the World Cup” to sail and “disturb the soldiers”.

“An Israeli officer told us that they were going to throw us in the sea if they did not finish searching us before the game started,” Arour told MEE. “He was angry and serious, as if the match was more important than our lives and long-term suffering.

“It was so unjust and humiliating.”

After questioning the passengers for several hours, Israeli authorities released them back in Gaza and seized the boat.

‘We will not stop’

A 39-year-old leukemia patient, Nafeth al-Loh was on the first humanitarian flotilla that was turned back while attempting to leave the coastal enclave on 29 May.

Unable to work because of his illness, Loh lives with his parents, wife and children, dependent on relatives to help feed his family and receive the drugs he needs to stay alive.

“My father cannot afford my drug any more - he can barely secure food for us,” he said. “I did not want to leave the Strip for the sake of travelling or migrating, I was just going to receive treatment abroad and come back to my family in Gaza.”

If Israeli naval forces had not intercepted their ship, being able to leave Gaza and receive treatment would have been “a rebirth”, he said.

“All I wanted was to relieve the pain I have been enduring for years,” he told MEE. “I spend weeks where I do not sleep more than an hour or two a day. I just wanted to feel normal again.”

Ramadan al-Hayek, a human rights activist in Gaza, said Israel was committing a war crime with its blockade of Gaza, imposing collective punishment measures through “isolating and starving two million residents in the Gaza Strip”.

“What those Palestinians did is a normal and understandable reaction to the severe Israeli restrictions and different forms of control on all aspects of their lives,” Hayek told MEE of the would-be siege breakers.

'All I wanted was to relieve the pain I have been enduring for years... I just wanted to feel normal again'

“The international community must finally take tangible steps to put an end to Israel’s violations of international humanitarian law, and exert pressure on the Israeli authorities to at least let civilians in the besieged Strip enjoy their basic right to healthcare.”

Loh remained determined to sail once again, although he fully expects that Israeli forces will continue to block any attempts to break the siege.

“I cried when the second Freedom Boat sailed last week because I could not be with them,” Loh told MEE.

“They’ve left us with nothing to lose,” he said. “Although I know they will never let us out, we will not stop kicking at all the doors.”