'Now, we will be alone': In Gaza, Ramadan begins with day of mourning Like many others in Gaza, the al-Madhoun, Abul-Jidyan and al-Ghazali families hoped they would be safe in their own homes.

But that hope was shattered over the weekend, when a barrage of Israeli bombs fell on Palestinians across the besieged coastal territory.

"On Friday, [my daughter Iman] called me on the phone and invited me to have Iftar with her and her husband and little Maria on the first day of Ramadan [to break the fast]," said 56-year-old Siham Hassouna.

"She died and I lost everything," Hassouna told Middle East Eye. Named: The people killed in Gaza and Israel this weekend
Read More »

Iman, 30, her four-month-old daughter Maria, and her husband Ahmad al-Ghazali, 31, were killed on Sunday in their apartment in the northern Gaza town of Beit Lahiya.

They are among at least 25 Palestinians, including two pregnant women, who were killed in Israeli air strikes on the Palestinian territory over the weekend.

Hassouna said her daughter had already bought clothes for her infant daughter to celebrate Eid, the holiday to mark the end of the holy month of Ramadan, which began on Sunday evening.

But the four month old won't have a chance to wear them.

"Who will wear the beautiful clothes [now]? No one. May God burn the hearts of those who burn our hearts," Hassouna said.

The violence started on Friday when the Israeli military and the militant group Islamic Jihad traded fire after the former killed four Palestinians in Gaza.

'But now, we will be alone. Who will take his place?'

Over the next two days, hundreds of rockets were launched into Israel from Gaza, while the Israeli military pounded the besieged enclave with air strikes and artillery.

Four Israelis also were killed by rockets fired from Gaza.

While the violence threatened to spill over into an all-out war, a ceasefire was reached early Monday between Israel and Palestinian factions.

Palestinians across Gaza say they have, once again, been left to pick up the pieces.

According to the Palestinian Ministry of Labour and Housing in Gaza, at least 130 apartments were completely destroyed, while 700 others were partially damaged in the deadly onslaught.

Salim al-Hindi, a father of four, told MEE that his apartment was destroyed, rendering him homeless. "Losing a house is similar to losing a soul," he said.

Al-Hindi said he's facing the difficult challenge of finding a place for him and his family to live. Right now, they're staying with relatives.

"I am unemployed and I have no money to rent a new, comfortable home," he said.

"I am still living with my relatives, but until when? Very soon, they will ask me to leave. Even if they did not, I must leave because me and my family are being hosted in one room."

Like the al-Ghazalis and many other families in Gaza, Hani Abu Sha'ar's family is spending the first days of Ramadan in mourning.

The 37 year old was killed when an Israeli air missile struck his family's home in Rafah, in southern Gaza. Before he died, Abu Sha'ar had asked his wife, Ibtisam, to prepare the popular dish of mlokhiya, to break the fast on the first night of Ramadan.

"He went shopping on Saturday afternoon. He bought everything we needed for Ramadan. That night, we sat and shared a happy time together without our kids. The next day, he died," recalled Ibtisam, 33.

She told MEE she couldn't imagine what Ramadan will be like without her husband.

He usually woke her and his three siblings up to share a pre-dawn meal, known as Suhoor, every day during the holy month, Ibtisam said.

"But now, we will be alone," she said, solemnly. "Who will take his place?" 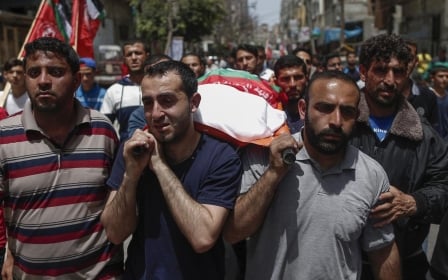