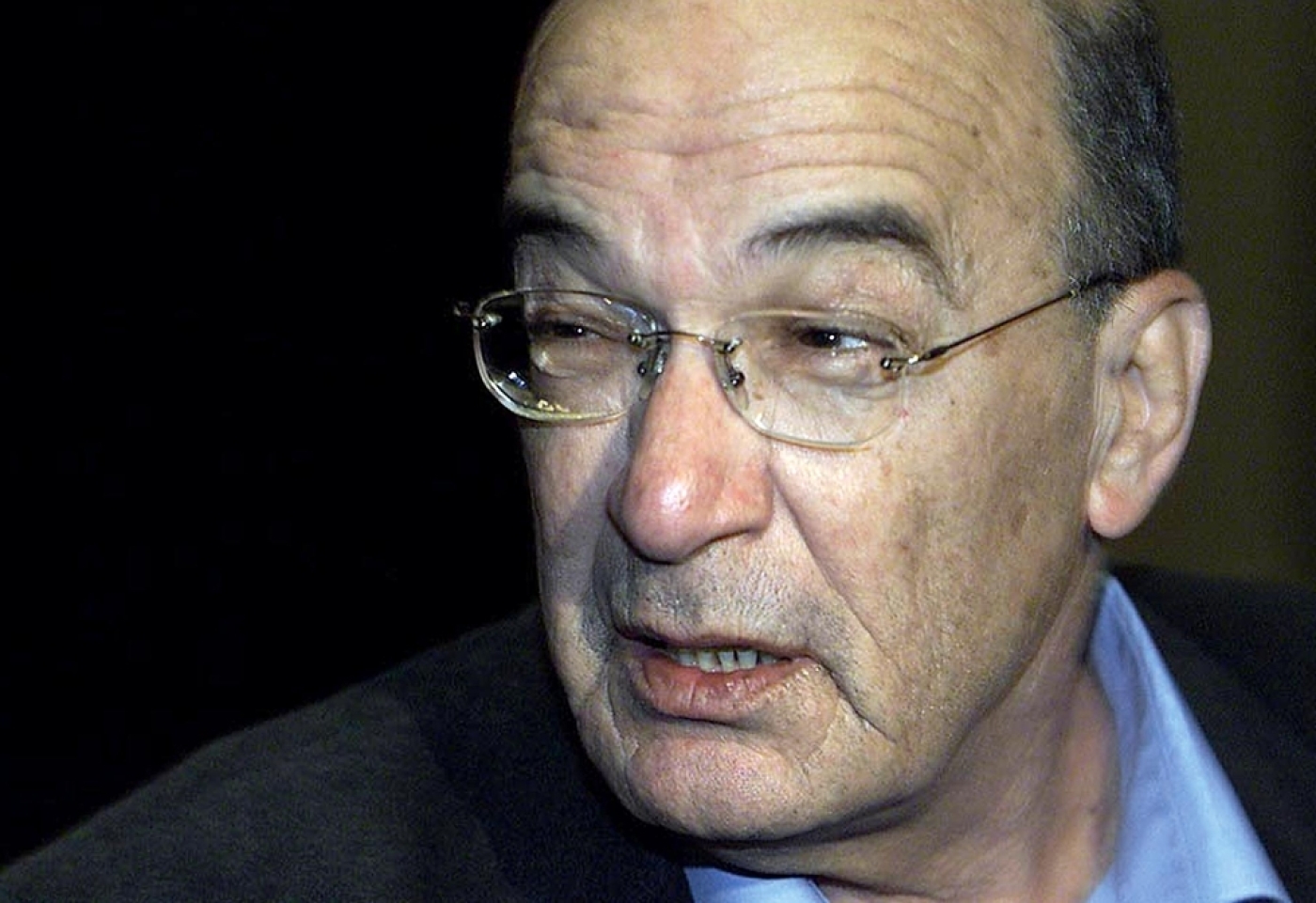 Yossi Sarid, leader of Israel's left-wing Meretz party, looks on as he arrives to attend the last session of talks with Palestinian negotiators in the Egyptian Red Sea resort of Taba, 27 January 2001. (AFP)
By
Dimi Reider

For better or worse, there has never been a more perfect embodiment of the old Israeli left than columnist and politician Yossi Sarid, who passed away from a heart attack age 75 late last week.

He was an uncompromising champion of human and civil rights, of free speech, of separation of church and state, of equality before the law, transparency and accountability, and a vocal, frighteningly erudite and deliciously acerbic critic of the Occupation.

But Sarid was also one of the strongest examples of the Israeli left’s ill-disguised contempt for the religious sentiments cherished by the majority of the Israeli Jews, its willful ignorance of ethnic discrimination against Mizrahi Jews, and its single-minded fixation on championing the collapsed Oslo process without admitting to its many shortfalls. All this contributed to alienating the majority of Israeli voters, including many who could have been natural constituents for any left-wing opposition party.

Sarid was born Yossef Sneider, to Yaakov, a prominent functionary of the soon-to-be-ruling party Mapai (the Workers' Party of the Land of Israel) and Dova, a teacher. When Sarid was six, his father learned that most of his family in Europe had been exterminated in the Holocaust; to honour them, Sneider took up the name Sarid, “remnant”.

After military service first with the artillery corps and then an Israeli army newspaper, Sarid went on to work for the Voice of Israel radio, making full use of his remarkable, bottomless bass of a voice.

Aged just 24, Sarid was appointed spokesman of the Mapai party, then at the peak of its glory as the founding party of the state and the source of all political and civil power in the country, and also the personal press secretary to the prime minister.

Sarid was elected to the Knesset in 1973 as the face of the young guard of the Labor party, a generation disillusioned by prime minister Golda Meir’s squandering of diplomatic opportunities in the run-up to the October war and Israel’s near-defeat in the war itself. This marked the beginning of an uninterrupted parliamentary career of 32 years.

Sarid was one of the great innovators of the Israeli left ahead of its brief return to power in the 1990s. He was one of the earliest adopters of a two-state solution, already supporting territorial compromise in the late 1970s. Then, in 1982, he broke with Israeli tradition that until then dictated support for the armed forces in wartime by abstaining in the Knesset’s vote on the First Lebanon War.

He set a third precedent two years later when he left the Labor Party to join Ratz - a dovish party led by another, earlier Labor renegade, Shulamit Aloni. Labor MKs have split off to form new parties before, but the innovation here was in the cause of his departure. It was prompted by Labor going into the first of many national unity coalitions with the Likud - a practice that benumbed Labor as a credible political force in the 1980s and all but buried it as a credible opposition from 2000 onwards.

Ratz merged with another dovish party, Mapam, in 1992, forming Meretz. Its first elections were its best - the party gained 12 seats and became a senior partner in the second Yitzhak Rabin government. Sarid was named environment minister during which time he transformed the ministry from a backwater into a force to be reckoned with, aggressively legislating against polluters.

After a brief stint in opposition, Meretz returned to government under Labor Prime Minister Ehud Barak in 1999, with Sarid forfeiting the housing portfolio to become education minister - a choice emblematic of Meretz’s focus on the cultural battleground rather than the socio-economic one.

Although his tenure lasted a little over a year, Sarid is still remembered by teachers as one of the most proactive education ministers Israel has ever had, fighting hard to fund and modernise the decaying state education system.

The majority of the public, conversely, remembers one particular decree - the decision to introduce two poems by Palestinian national poet, Mahmoud Darwish, into the curriculum. The poems were emphatically non-political but the Israeli public baulked at the notion of schoolchildren being taught the national Palestinian poet. The controversy soon escalated into a no-confidence vote, but the poem survived in the curriculum, with one being removed only this year.

Sarid stayed on in the Knesset for five more years, before finally retiring in 2005 and taking up a column in Haaretz - appreciated for its erudition and wit even by those who disagreed with its content.

However, while the 90s were a high point for Sarid, they also saw the flip side of his particular brand of liberalism emerge and cement.

Alongside the peace process and it discontents, the 1990s were dominated by the ascendancy of religious Jewish parties - especially the Sephardi Shas, representing largely Mizrahi, or Arab-Jewish, Ultra-Orthodox.

Sarid saw Shas’ rise as a cardinal threat to what little separation of church and state existed in Israel, and threw all of his rhetorical power to fight it, not shrinking from denigrating the revered spiritual leader of the movement, Rabbi Ovadia Yossef.

But for many, the fight over the religious character of the state marked a much more important divide between Meretz and Shas - that between the party of the old, secular Ashkenazi elite and the party of a badly discriminated minority. Sarid’s arguments fell flat for many, jarred by his seemingly unshakable disinterest in the specific hardships the Ashkenazi old guard imposed on the Mizrahi minority.

On the Palestinian issue, Sarid stood honourably apart from the Labor Party, which spent the 2000s compulsively selling its commitment to a peace process for a few cabinet seats. But on the issue of Mizrahi Jews, Sarid embodied the old Left’s haughty contempt for Jewish ethnic and cultural minorities, who also happened to comprise the majority of the Israeli working class - a cross section of the very communities any social-democratic party should, theoretically, fight for.

Against the backdrop of this apathy - and sometimes outright denial - of the Mizrahi plight, Meretz’s commitment to Palestinian rights looks to many Israelis as the inexplicable boutique altruism of an old elite. This dissonance is as much a part of Sarid’s liberal legacy as its nobler aspects.

Between the personal and the political

The tragic irony of this is made all the starker by the fact Sarid never turned away a person in need, whatever their background.

Hip-hop singer The Shadow, probably the most violent rightist rabble-rouser today - responsible for organising attacks on leftist rallies during last summer’s Gaza war - posted an uncharacteristically warm obituary for Sarid, recalling the latter’s help when the singer’s father was abused by the prison system.

Political rivals from across the aisle praised his even-handless and incorruptibility, with only the most marginal of right-wing extremists stooping to celebrate his death. Israeli media and social networks were so full with similar memories of Sarid that people who he didn’t help, reassure or comfort in some way began to seem a minority.

But there was something about the aloof, somewhat haughty strain in Sarid’s otherwise earnest and sincere liberalism that prevented him from translating these laudable traits into broader political achievements.

This, incidentally, belies an essential flaw with some of the eulogies that bemoaned not only the death of Sarid, but the passing of the Israeli left itself.

The truth is that while Sarid’s left is withering away, a new generation of Israeli progressives and radicals is well on the way to succeed it. It is a more inclusive and diverse generation, which battles the status quo on many more fronts than the 90s left ever did - from gas revenues to independent unionising, from rent control to resisting the forced displacement of the Negev Bedouin communities, and, crucially, against the internal Jewish racism so prevalent among Israel’s liberal elites.

The fight against the occupation, too, is much broader, more direct and more sophisticated than Meret’z own campaigns; and the emergence of the Joint List as the most dynamic force of the Israeli opposition gives hope of mainstream political struggles where Palestinians are artners, rather than distant objects of liberal compassion.

The fact that Sarid’s politics overlapped with the left’s last actual stint in government does not mean they are right for all seasons, or even that they were entirely right at the time. His generation is on its way out, as all generations ultimately go; it can only be hoped that the generation now on the ascent will learn both from Sarid’s achievements and from his mistakes.