One year on, Yemen's Saleh as divisive in death as he was in life

On the anniversary of Ali Abdullah Saleh's death, his supporters are hailing the former president as a patriot; but not everyone feels that way SANAA – A year on from his assassination, Ali Abdullah Saleh is as divisive in death as he was in life.

On 4 December 2017, two days after Saleh announced he was turning on his erstwhile Houthi allies, his General People’s Congress (GPC) party revealed that the Yemeni rebels had killed the former president in Sanaa.

It was a dramatic end to a life that loomed large over Yemen for four decades, and one that stirs contrasting reactions amongst Yemenis today.

For two and a half years, Saleh had been fighting alongside the Houthi rebels against the internationally recognised government of Abd Rabbuh Mansour Hadi.

In the Houthis he saw a route back to the prominence he lost when he was toppled from the presidency in the 2011-12 revolution.

But his gambit to switch sides last year proved to be a fatal mistake, one that his supporters are now framing as a revolution in itself.

Not everyone sees it that way, however, and the anniversary of Saleh’s death, which fell on 2 December, has enflamed Yemeni social media.

Many supporters of the 2011-12 revolution against Saleh have decried his supporters’ characterisation of the move against the Houthis as a righteous uprising.

In fact, Adnan al-Rajihi, a pro-Hadi journalist and veteran of a youth movement behind the 2011 revolution, instead saw Saleh’s death as a liberation in itself.

“They [Saleh's supporters] were waiting for Afash [Saleh] to save them from the Houthis, but in the end the Houthis saved them from Afash. Bad friends die enemies," he wrote on Facebook.

“The black history of the Afafish’s [Saleh's supporters] dead leader means they are trying to create for themselves a [positive] memory and described the anniversary as one of an uprising.”

Mohammed Abdul Bari, a member of the pro-government Islah party that Saleh’s forces are now fighting alongside, told Middle East Eye he considers the former president a malign figure.

"Saleh is the first enemy of Yemenis and he stands behind all our suffering. It is a shame to say he led an uprising against the Houthis," Abdul Bari said.

"Saleh helped the Houthis take over Sanaa, to take revenge on his opponents from the peaceful revolution of 2011. He only launched his so-called uprising when he lost his interest with the Houthis."

According to Abdul Bari, Saleh thought by attacking the Houthis and realigning with Hadi he could lead Yemen once again. Freeing Yemenis of Houthi rule was never part of his thinking, the Islah member said.

Saleh and the Houthis always seemed to many like an odd fit.

Saleh was so stupid he supported an armed group whose leader he killed. Of course they would take revenge

For years the two were at odds, resulting in Saleh’s forces killing the movement’s leader Hussein al-Houthi in 2004.

“Saleh was so stupid he supported an armed group whose leader he killed. Of course they would take revenge,” Abdul Bari said. “Saleh committed suicide by reconciling with the Houthis. At the end, he wanted to become a fake hero by announcing an uprising against the Houthis.”

Though Saleh was killed, his forces continue to fight the Houthis.

Most prominently, his nephew, Tareq Saleh, is one of the leading figures on the pro-government forces’ assault on the strategic, Houthi-held port city, Hodeidah.

But while Abdul Bari did not deny the GPC’s participation in battles against the Houthis, he was keen to downplay their importance.

"We accept the members of GPC as brothers but that does not mean we forgave those GPC members that were killers of Yemenis,” he said.

"All leaders of the GPC party who participated in killing Yemenis during Saleh's regime should be subjected to fair trial."

'Say good things or shut up'

When Saleh was killed, GPC member Walid Abdullah fled Sanaa for the southern city of Taiz.

Today he remembers his slain leader as a brave man - brave enough, he said, to face off against the Houthis in Sanaa and sacrifice himself for freedom.

"Saleh had the chance to flee towards a liberated area, but he preferred to face the Houthis in Sanaa. This is the bravest act, which no one has ever done," Abdullah told MEE.

"All Yemenis should forget the past and fight the Houthis shoulder to shoulder, until the liberation of the whole country."

Meanwhile, Kamel al-Khawdani, a GPC leader, marked the occasion by decrying Saleh’s critics, accusing them of not seeing his “dignity, heroism, courage, sacrifice, freedom and patriotism”.

"On the first anniversary of our uprising and the martyrdom of our leaders and many of our men, we say: 'Say good things or shut up'."

Others in Yemen have not forgotten that the Islah party, which is the Muslim Brotherhood’s Yemeni branch, had previously worked with Saleh’s government before the 2011 revolution.

“The Muslim Brotherhood in Yemen was part of Saleh's regime for more than 30 years. When they disagreed with him, they sought to demonise him and demonise all the years and achievements of his rule," Ali al-Bukhaiti, a Houthi leader turned political analyst based in Jordan, said on Facebook.

"They forgot that they were the hand he was hitting with and the mouth that was ordering his fatwas, and that their party's leader Mohammed al-Yadoumi was one of Saleh's personal intelligence officers."

For other enemies of the Houthis, however, the anniversary of Saleh’s death serves as a rallying call to unite against the rebels.

"These days, we witness the first anniversary of the martyrdom of the former President Ali Abdullah Saleh and his companion Sheikh Aref Awadh al-Zuka at the hands of the coup's gang," Yemeni Vice President Ali Mohsen al-Ahmer said on Facebook.

"We find it an opportunity to call on everyone to remove the opposition and unite ranks behind our political leadership, represented by the president of the republic, Marshal Abd Rabbuh Mansour Hadi, in order to recapture the country and liberate the rest of its territory with the fraternal support of brothers in the coalition countries led by Saudi Arabia."

Mohammed Ali, a seasoned Yemeni journalist based in Taiz, agreed with the sentiment, saying now was not the time for arguments within the pro-government forces.

"No one denies the disputes inside the supporters of Hadi in the liberated areas, and this is a normal thing as the legitimacy includes members of all Yemeni political parties," he said.

"All groups should focus on the liberation of the country and then they can solve any further disputes."

Ali himself participated in the revolution against Saleh in 2011 and he does not consider the former president to be a hero. That said, he does not want to discuss this issue nowadays.

"Everything in its time will be good, and this is the time for looking for peaceful solutions or liberating through military force." 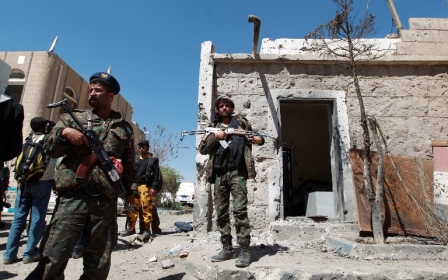