‘This is our land’: US embassy move riles ‘Nakba’ refugees from West Jerusalem 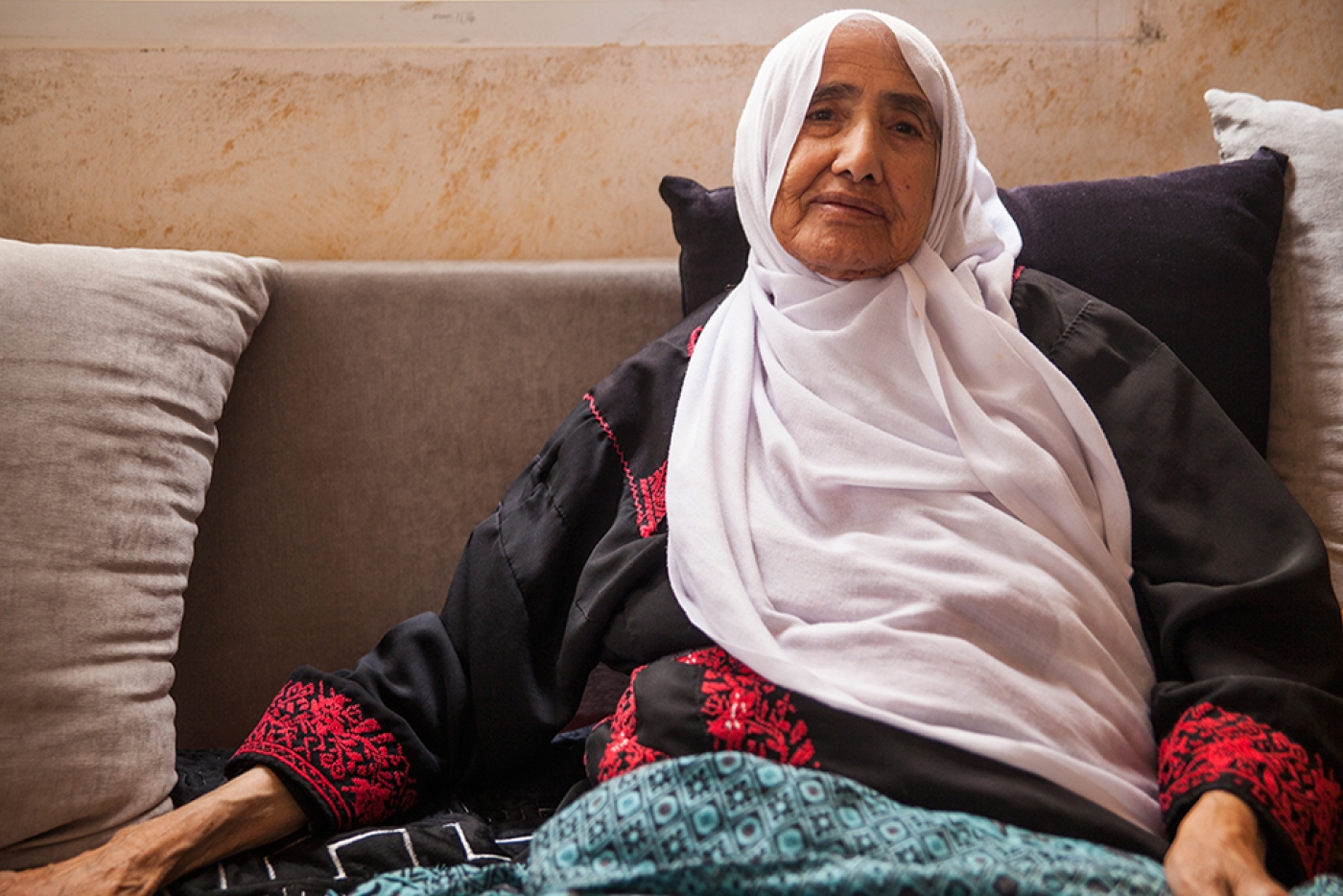 JERUSALEM - Naime Al Sheik Ali was just nine years old when her father told her that they had to leave their Palestinian village of Beit Thul in order to save their lives.

Just a few hours later, at midnight on 1 April 1948, Jewish paramilitary forces were in the hills surrounding Beit Thul, situated a few kilometres to the west of Jerusalem city.

“When they came they started shooting so we fled,” Al Sheik Ali told Middle East Eye, recalling the events of 70 years ago that have shaped her life to this day.

That night, Al Sheik Ali became one of 700,000 Palestinian refugees displaced by Jewish forces during the Arab-Israeli war of 1948 in which Israel declared its independence on 14 May.

Many of the refugees ended up in camps across Jordan, Syria, Lebanon, Gaza, the West Bank and even in East Jerusalem, where they continue to live with their descendents, bringing the number of refugees to more than five million today, according to UNRWA, the United Nations agency responsible for Palestinian refugees.

Mohammed Abu Kaya, whose name has been changed to protect the privacy of his family, is a third-generation refugee. The massacre orchestrated by Jewish forces in the West Jerusalem village of Deir Yassin is what scared Abu Kaya’s grandfather into fleeing his home within the inner city.

At least 110 people, including women, children and elderly residents, are estimated to have been killed by Lehi and Irgun militia fighters in their assault on Deir Yassin, a key village on the road between Tel Aviv and Jerusalem, on 9 April, 1948.

'The same will happen to you'

“When the massacre started the [paramilitaries] took a kid and strapped him on an army jeep and drove him around different neighbourhoods of Jerusalem, saying ‘the same will happen to you if you don’t leave,'" Abu Kaya said, retelling his grandfather’s story to MEE. His grandfather and his family fled to Egypt.

Also in West Jerusalem is the neighbourhood of Arnona. Like many Palestinian population centres in 1948, Arnona was seized by Haganah fighters, the main Jewish paramilitary force in British Mandate-era Palestine.

Now an upscale Israeli district, Arnona is also where the US Consulate building is located. It is here the US government will temporarily move its embassy from Tel Aviv on 14 May, coinciding with the day Palestinians commemorate the Nakba, or "catastrophe", referring to the mass expulsion in 1948.

Israel claims Jerusalem as its “undivided capital”, while Palestinians claim the city as the capital of a future Palestinian state.

But not a single country currently has its embassy in Jerusalem because such a move is widely considered to violate international law.

Under United Nations Resolution 181, which in 1947 set out the conditions for the partition of Palestine into an "Arab State" and a "Jewish State", Jerusalem was to be administered by the UN under a "special international regime".

The 1949 armistice agreement that formally ended the first Arab-Israeli war divided the city along the "Green Line" into Israeli-controlled western areas, and Jordanian-held East Jerusalem, which included the Old City.

Israel’s occupation of East Jerusalem and the West Bank since the 1967 Arab-Israeli war is widely recognised as illegal and violates further United Nations resolutions.

For Palestinians then, sovereignty over the city is not something for leaders of other countries to determine, as US President Donald Trump did when he announced the embassy move in December.

But Abu Kaya said that Trump, in declaring Jerusalem as Israel’s capital, had at least removed the “fig leaf of American diplomacy” that had allowed Washington to style itself as a mediator between Israel and the Palestinians.

“The US is not being an honest broker, not now and will never be,” he said.

The US is not being an honest broker, not now and will never be

There are arguments the US embassy move has killed any possibility of a two-state solution, which would grant Palestine a state with its borders along the Green Line and East Jerusalem as the capital.

This solution is a rhetoric pushed by the majority of the international community, including the UN, as well as by the Palestinian Authority – the governing body in the West Bank.

But the two-state solution is not favourable for the Palestinian refugees who fled their villages in 1948, or during the 1967 war.

The right of return for refugees is enshrined in the United Nations General Assembly resolution 194 (III), passed in December 1948, but Palestinian refugees know their return will not be possible if historical Palestine is split into two nations.

What is important to stress at the time of the US embassy move to a neighbourhood in West Jerusalem is not the death of a two-state solution, but the fact it will be situated on land stolen from its legal owners in 1948.

'All of Jerusalem has been occupied'

Amany Kalify, a coordinator for the Grassroots Jerusalem Local Mobilisation and Network, sees “hypocrisy” in the position of most countries that recognise the 1948 borders of Israel while condemning its further annexation of East Jerusalem and the West Bank in 1967.

“Even based on international law… refugees have the right to return to their land, but this was never fulfilled. International law will never bring justice to Palestinians.”

Palestinian refugee Al Sheik Ali agreed: “This land is our land, no one has the right to do what they want in this land, whether they are American or Israeli. Trump said Palestine belongs to the Jews. He doesn’t have the right to say that.”

At the same time Palestinians mourn the Nakba, Israel celebrates the 70th anniversary of its “independence”.

According to a statement issued in February by the US Embassy in Israel, the opening of the embassy offices on 14 May within the existing consulate compound in Arnona is only temporary.

“In parallel, we have started the search for a site for our permanent embassy to Israel, the planning and construction of which will be a longer-term undertaking,” the statement said.

It leaves the question as to why the US government had to rush the embassy move if the location was going to be temporary.

“This is what the US is telling the Zionist government: it’s an important year for you, the 70th year since the establishment of Israel... it’s saying we’re supporting you in this project, of the Zionist regime, telling the world Israel has the right to occupy the whole of Palestine,” Kalify said.

The plot on which the US embassy will eventually be built, situated in the al-Baqa al-Fawqa neighbourhood of West Jerusalem, is also land appropriated by Israel from its Palestinian owners.

The land was originally owned by Maqdissian Taham al-Khalili and her sister Husseini al-Fetyani, who purchased it in the 1920s.

According to a report by Al Jazeera, a contract was signed between Israel and the US in 1989, leasing the land out for 99 years, at $1 a year. Within the contract Israel outlined the land would be used for an embassy.

When al-Khalili passed away, the ownership of the land was passed to her son Ali al-Fetyani who then, before his death, handed it on to his son Daoud al-Fetyani who still possess the proof of ownership documents.

MEE contacted Daoud al-Fetyani though he declined to be interviewed.

Israel maintains a law of custodian absentee property, which takes custody of land left absent by Palestinian refugees who had to flee their homes.

Abu Kaya explained the law as a way for the Israeli government to hand private Palestinian property to Jewish settlers, and also in this case, the US government.

This law is relevant to the land owned by the al-Fetyani family, as the original owners fled outside the country.

“They can easily do whatever they want [with the land] between the US and the state of Israel,” said Abu Kaya.

“All the families are in the same boat, [it applies to all] the properties that were stolen from the people who fled.”