Over 100 refugees stranded or unaccounted for after transfer to Algeria border: UNHCR

UN refugee agency says about 120 refugees from Syria, Palestine and Yemen were detained and sent to border near Niger The United Nation’s refugee agency expressed concern about the status of 120 asylum seekers it says are either stranded on Algeria’s border with Niger or are unaccounted for, after they were rounded up by Algerian authorities in late December.

The United Nations High Commissioner for Refugees (UNHCR) said in a statement on Thursday that the refugees hailing from Syria, Palestine and Yemen were detained in southern Algeria and sent to the Guezzam border post on 26 December.

About 20 people remain stranded at the border, UNHCR said, citing information it has obtained about the individuals' whereabouts, while the other 100 are unaccounted for.

“Given the urgent humanitarian imperative in providing assistance to those stranded, UNHCR is appealing to the Algerian authorities for access to those individuals, to address humanitarian needs and to identify those in need of international protection and to ensure their safety,” the agency said.

UNHCR did not provide a specific breakdown of the number of refugees from each country, nor did it say whether they would be extradited to Niger or another country, but it did say that some are either registered refugees or claim to have applied for asylum in Algeria.

The agency, without specifying the conditions the refugees have had to endure, said they are “exposed to the elements”.

Algeria’s border region with Niger is a harsh, arid and empty desert that gets little rainfall.

UNHCR did not respond to MEE's requests for comment prior to publication.

Algeria has not yet commented on the status of the refugees, but UNHCR said it is in regular contact with the authorities.

UNHCR's figure for the number of refugees stranded on the border is higher than what had been previously reported.

On Wednesday, rights group Algerian League for the Defence of Human Rights (LADDH) said 50 refugees were stranded on the border.

On Wednesday, an Algerian official who works at the migration office in the interior ministry told AFP news agency that the country had shut down its southern border to incoming Syrian refugees out of fear they may have connections to militant groups. 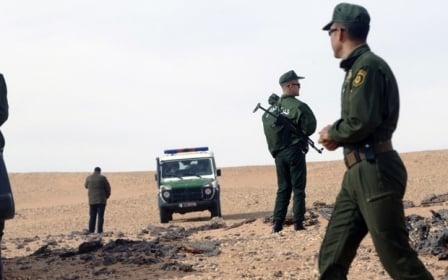