For seven months, 14-year old Ali Qanibi has sat at his window, staring out at a life that's not his 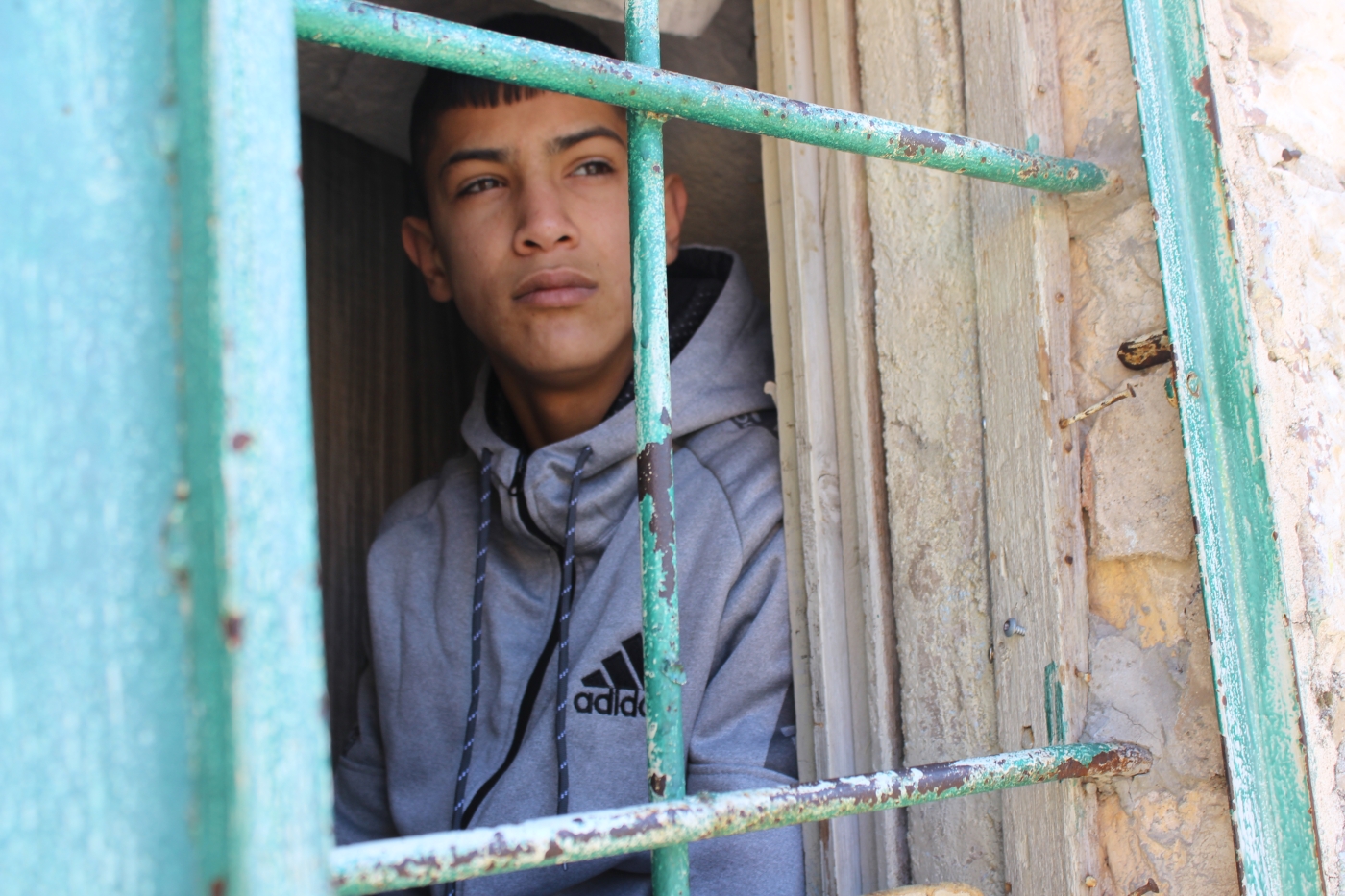 Ali Qanibi, 14, sits at the window of his home in Sheikh Jarrah, where he has been under house arrest since last year (MEE/Aseel al-Jundi)
By
Aseel Jundi
in
Occupied East Jerusalem

Ali Qanibi is addicted to two things: his smartphone and staring out of the window. There isn’t much else the 14-year-old Palestinian boy can do at the moment.

At his family’s home in the western part of the East Jerusalem neighbourhood Sheikh Jarrah, Ali sits at a ground floor window, crisscrossed with thin iron bars, looking out onto the alleyway that runs alongside the building.

On the wall outside, there’s a graffitied slogan: “No to the colonisation of Sheikh Jarrah.” 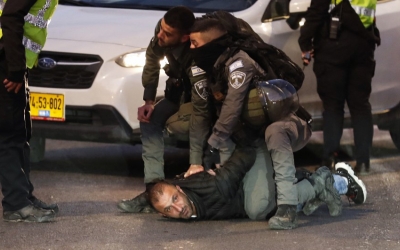 Last June, shortly after Israel had tried to expel Palestinian families from Sheikh Jarrah to make way for Israeli settlers, leading to protests across the occupied West Bank and beyond, Ali was arrested in the neighbourhood, accused of throwing molotov cocktails.

Four days later, he was released, on the condition that he remain under house arrest for a week.

The following month, though, the Israeli police re-arrested Ali, accusing him of burning the car of a settler who took over a nearby house in Sheikh Jarrah a few years ago. It’s a charge Ali and his family vehemently deny.

Ali was once more released, but again placed under house arrest, this time for an indefinite period. And while the teenage boy is now allowed to go - accompanied by one of his parents - to school, he has to return home immediately.

Ali's lawyer, Muhammed Mahmoud, told MEE his next hearing will be at the beginning of March, where the Palestinian teenager is likely to be charged with burning the car and sentenced to 50-60 hours of community service.

The boy at the window

On a recent visit to Ali and his parents at their home, the family told Middle East Eye their lives had been turned upside down ever since last summer.

Ali said his life has now been divided into two stages: his life before being placed under house arrest and his life now. He found being confined to his house, unable to go and play with his friends in the neighbourhood, almost unbearable.

The Palestinian teenager described the window he sits beside day and night as “life” because it is the only way of seeing the sun, of breathing fresh air, and of talking to friends and neighbours, who come by to keep him company.

“I’ve been under house arrest for seven months now,” said Ali. “The most difficult months were the first three. Now I have got used to the isolation and the quiet, and I no longer have any passion for continuing my education.”

When asked whether he would prefer being in prison, he answered: “Of course. At least in prison, you know the doors are locked and that you can’t open them. At home, the door is open, but I can’t leave, and that’s the worst thing about it.”

Despite being allowed by the Israeli authorities to return to school - within a strict set of parameters - Ali’s brain still feels scattered. The only thing he can think about when he’s there is that he will soon return to his prison.

These aren’t the only ghosts haunting Ali. Memories of the physical and mental violence he was subjected to when he was arrested are never far away. He is perpetually afraid of repeating the experience.

“I dream of living a normal life like all the other children in the world,” Ali said. “I want to play in my neighbourhood like I used to before I was arrested.”

A neighbourhood that knows no peace

Even before his house arrest, though, Ali’s childhood was one coloured by the threat - constant and common to all Palestinian families in Sheikh Jarrah - of being forcibly expelled from their home.

Ali’s father, Rateb, told MEE that the restrictions faced by the neighbourhood’s residents have risen dramatically ever since the popular uprising that broke out in Jerusalem last May, during Ramadan.

The neighbourhood residents no longer know peace, constantly unsettled and assailed by the sound of house raids and night arrests.

'At least in prison, you know the doors are locked and that you can’t open them. At home, the door is open, but I can’t leave'

“Three years ago, another radical settler came to live in the outpost near our home,” said Rateb.

“Ever since he came, we’ve been subjected to great harm. He claimed that Ali set his car on fire, even though he assaults residents all the time, and sprays them with gas and films them in an attempt to provoke them. But the residents’ complaints to the police fall on deaf ears.”

Rateb described house arrest as a form of collective punishment for the whole family because it affects even the most minute details of daily life.

Neither he nor his wife are able to properly socialise with each other or their other children because one of them needs to remain with Ali at home at all times. In effect, this means that at least one parent needs to remain under house arrest at any given time.

The impact of house arrest

Social psychologist Mahmoud Abdul Nabi told MEE Ali’s situation carries serious behavioural and mental health ramifications. At a crucial stage in his development, he is being constantly reminded that he is not free and that he is under surveillance.

Under house arrest, the home can take on a severely negative aspect, turning a place that is supposed to be associated with safety and security into a prison.

Abdul Nabi said that even the mundane details of daily house arrest have negative consequences on the child’s mood and emotional state, and leads to an increase in self-censorship.

It can also lead to acting out, aggression, mood swings and even rebelliousness. The findings of one 2018 study into house arrest “emphasised the potential developmental dangers of house arrest at the critical stage of adolescence”, while also acknowledging the potential for a “period of positive changes”.

For parents, a change of role can take place. The caregiver becomes the jailer. They start to monitor their children day and night, which can lead to tensions in the relationship between parent and child.

Children are often unable to fully comprehend the situation, and parents are at a loss to explain it and to absorb their anger. All of this leads inevitably to a kind of emptiness and an emotional chaos to which Ali has become all too familiar.

While Ali and his father are being interviewed, Um Hamza, Ali’s mother, busies herself with household chores.

But after she is asked about his house arrest, she said: “I’m tired of seeing my child imprisoned and unable to exercise his most basic rights, his right to play, to move about freely.”

She added that she has grown weary of seeing him sitting near the windowsill, staring out longingly at the other children as they play football.

Um Hamza said that her home has become a prison for her and her child, amidst the prosecution’s insistence on constantly postponing Ali’s court date, with no time limit placed on his period of house arrest.

Um Hamza told MEE about the daily struggles her family faces. In the event that Ali takes ill, his mother must first call her lawyer to secure permission from the Israeli police for her to take her son to get treated.

She then has to bring a medical evaluation to the lawyer for confirmation that Ali indeed left for medical treatment.

The Palestinian mother isn’t only occupied with Ali’s life under house arrest. Her daughters, both of whom have to go to school by foot, have to be accompanied by their mother every day for fear that they may be attacked by armed settlers patrolling the neighbourhood.

As we take leave of the family's home, Ali's words rung in our ears. While he's been under house arrest, seasons have come and gone, he told MEE. And yet here he is, at home, withering away. 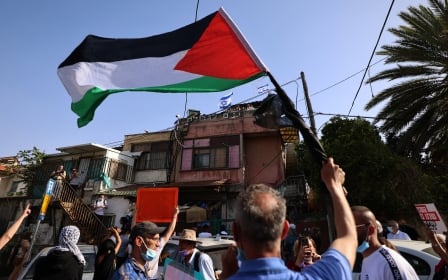 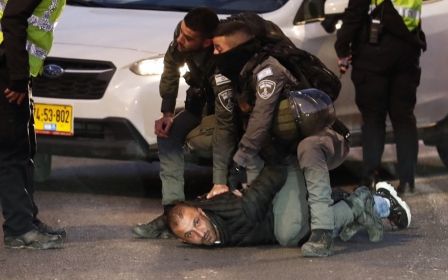 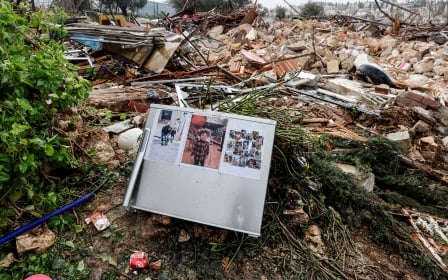