The 1936 Palestine strike: A history of Palestinian revolt

Events in 2021 have drawn parallels to uprisings under the British Mandate, which similarly united large swathes of Palestinian society 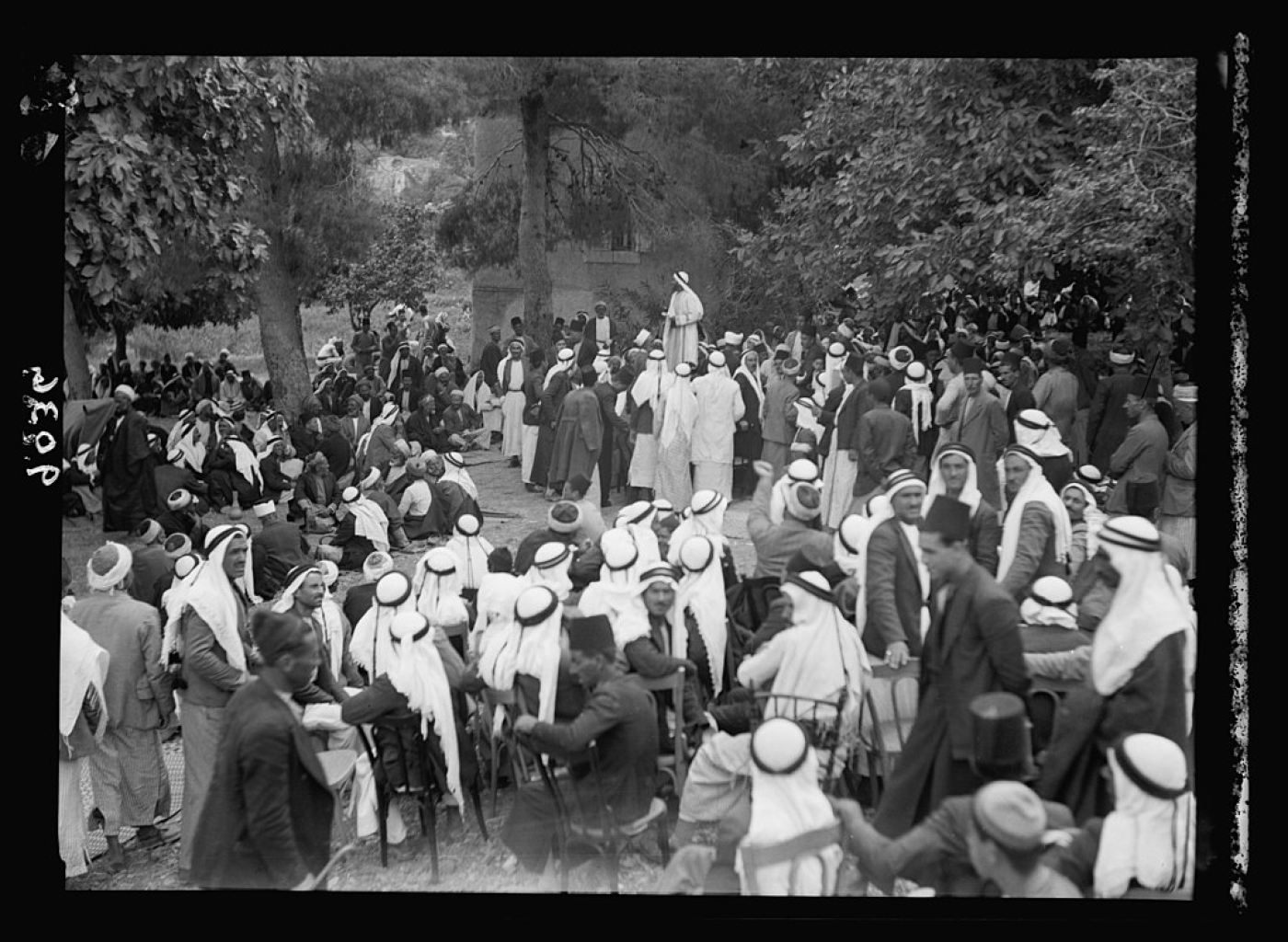 Palestinians gather in Abou Ghosh, west of Jerusalem in 1936 Mandate-era Palestine, amid a general strike (Library of Congress)
By
MEE staff

The planned “Karameh”, or “dignity”, strike will mean the closure of all commercial activities to denounce the ongoing Israeli military offensive on Gaza - which has killed at least 212 people since 10 May - and the  planned expropriation of Palestinian families in the occupied East Jerusalem neighbourhood of  Sheikh Jarrah, in violation of international law. Palestinian student unions have also joined calls for a general strike and vowed not to attend their classes in solidarity.

The announcement of such a widespread strike has led some to draw parallels to the 1936 general strike in British Mandate-era Palestine.

From the river to the sea, Palestinians are collectively on strike today in the largest national action in in many, many decades, perhaps since 1936.

Middle East Eye takes a look at this defining moment in Palestinian history before the creation of the state of Israel and the Nakba - “catastrophe” in Arabic - that would displace at least 750,000 Palestinians from their homes.

Palestine under the British Mandate

By 1936, historic Palestine had been under British colonial mandate for nearly 20 years. Under the Sykes-Picot agreement of 1916, France and the United Kingdom had divided large swathes of Greater Syria and Iraq, formerly part of the late Ottoman Empire, between themselves. However, the mandate over Palestine was not the only British colonial endeavour in the region. Unbeknownst to regional Arab leaders - and the broader Palestinian population - at the time, the UK had promised in the 1917 Balfour Declaration that it would support the establishment of a "national home for the Jewish people" in Mandatory Palestine.

As Adolf Hitler rose to power in Germany in 1933, and began enacting violent and discriminatory policies against Jews that would later culminate into the Holocaust, many Jews began leaving Europe, with thousands headed to Palestine.

Meanwhile, Jewish land ownership more than doubled from 148,500 to 383,500 acres within the same timeframe.

Jewish immigration was a source of tension between British authorities and Palestinians, particularly due to the transfer of lands to the Jewish community - whether through unilateral handovers by the British, or by creating conditions facilitating land grabs or the purchase of lands from non-Palestinian feudal landlords.

British authorities enacted legislation that allowed the confiscation of Palestinian land for military purposes - only for these lands to then be handed over to Jewish residents.

The socio-economic impact of British policies on Palestinians - many of whom found themselves evicted from their villages by landlords, their agricultural production heavily taxed, while those who moved to urban centres found themselves living in poverty in shanty towns  - also led to growing anger among Palestinians, setting the stage for the 1936 strike.

April 1936 marked a turning point in Palestinian rejection of the British Mandate.

On 19 April that year, the newly formed Arab National Committee in Nablus called on Palestinians to launch a general strike, withhold tax payments, as well as boycott Jewish products, in order to protest British colonialism and growing Jewish immigration.

Only a few days prior, an incident in which Palestinians killed two Jews near Tulkarem led to a spike in confrontations between Jews and Palestinians.

By 25 April, local national committees united to form the Arab Higher Committee, led by Jerusalem Grand Mufti Amin Husseini, which would go on to become the political body advocating for Palestinians under the British Mandate.

The movement was notable for encompassing much of Palestinian society at the time - rural, urban, men, women, countless stories testify to its broad nature. Solidarity campaigns would also emerge across the Middle East, in cities like Cairo, Beirut and Damascus.

The fact that the Palestinian population at the time comprised mostly of farmers helped maintain the strike, some Palestinians have said, by giving them a certain degree of self sufficiency in food and basic necessities - while Palestinian fellahin became central to the struggle.

The strike was brutally suppressed by British forces. British authorities began arresting anyone suspected of being responsible for the movement, while also proceeding with punitive home demolitions - a practice that Israel continues to implement against Palestinians today.

At the same time, the British worked with and trained Zionist militias such as the infamous Haganah to crack down on Palestinian unrest.

The strike was called off by the Higher Committee in November 1936, as regional Arab leaders from Jordan, Iraq and Saudi Arabia urged Palestinians to trust that the UK would implement their demands - demands which were, in fact, never fulfilled.

While the general strike lasted six months, it set the wheels in motion for what would become known as the Arab Revolt from 1936 to 1939.

Those three years marked the most sustained armed resistance against the British Mandate, and was violently repressed by British forces, which shipped more than 20,000 troops into Mandatory Palestine to quell the uprising. In parallel, Zionist paramilitary groups grew in numbers and strength.

The Peel Commission, a British inquiry launched following the breakout of the Palestinian strike, officially called for the first time in 1937 for a partition of Palestine into two states. Palestinians widely rejected the plan, as it would involve the transfer of more land, and entail the forcible displacement of some 225,000 Palestinians, compared to 1,250 Jews. Meanwhile, Zionist leadership was split, with some arguing that all of historic Palestine should become the state of Israel.

It was only in 1939 - as the UK was faced with the outbreak of the Second World War, that the revolt came to an end, as London issued a White Paper promising to restrict Jewish immigration to Palestine and promising the establishment of an independent Palestinian state within a decade.

Some estimates gauge that 5,000 Palestinians were killed, 15,000 to 20,000 wounded, and 5,600 imprisoned between 1936 and 1939. Given the size of the population at the time, around 10 percent of Palestinian men were estimated to have been killed, injured or imprisoned during the three-year revolt.

'We are living by the sword': The regrets of an Israel founder's son
Read More »

But by the time the 10-year deadline set by the White Paper came to pass, the state of Israel was established, and hundreds of thousands of Palestinians were displaced in the Nakba.

While the revolt failed to achieve much of its goals, it did set a precedent for future Palestinian resistance.

Strikes with varying degrees of mobilisation have taken place over the decades - including the 1976 Land Day strikes by Palestinian citizens of Israel. Meanwhile, the Boycott, Divestment and Sanctions (BDS) movement has highlighted the long Palestinian history of boycott movements dating back to the British Mandate.