Ramzi Abu Ajamia says he plans to dodge apparent arrest order for as long as possible, but boy's father says he fears for his life Ramzi Abu Ajamia has been on the run from Israeli soldiers for the past seven nights (MEE/Abed al Qaisi)
By
Sheren Khalel
, Abed al Qaisi

BETHLEHEM, West Bank - The father of a 12-year-old Palestinian boy on the run for a week from Israeli soldiers in the occupied West Bank has told Middle East Eye that he fears his son will be killed if caught.

Ramzi Abu Ajamia has been in hiding for the past seven nights, the boy’s father, Nasir Abu Ajamia said from their family home in Bethlehem’s Dheisha refugee camp.

Israeli forces first showed up at the family’s home on 24 March, raiding the house and detaining Ramzi’s older brother.

Ramzi said he had no idea why Israel was seeking to detain him. He says he attended protests against Israeli occupation, where rocks were thrown.

“I don’t go to the clashes outside of the camp, but when soldiers come to us inside the camp, yeah I go out with the other boys - but that’s it - only when they come to us,” he said, speaking to MEE during a furtive visit to the family home.

“I can’t explain why they want me, other than it’s my turn. Tomorrow it will be another kid’s [turn].”

Nasir said: “The soldiers have been to the house three times now, the first time they took my 16-year-old.”

At the time, 12-year-old Ramzi was not at home. “They beat his brother bad and afterward Ramzi saw the blood on the street and heard about how bad his brother had been hit, so he’s too frightened to let himself be arrested.”

Nasir said the Israeli soldiers had asked where Ramzi was on three subsequent visits to the house. While Nasir has urged his son to stay home and allow Israeli soldiers to take him in for questioning, Ramzi has refused.

Instead, Ramzi said, he plans to dodge the apparent arrest order for as long as possible. His father fears the situation risks escalation by the day.

“I’m scared that they will kill him if they find him now, I know it happens, after coming to arrest someone three times and not finding them, they aim to kill them when they do,” the father said.

Israeli military protocol states that live fire can only be used if there is an apparent threat to life.

During the conversation with MEE, Nasir lectured Ramzi several times about not being afraid and getting the inevitable over with, trying to convince his son that in the end, turning himself in would be best.

“Why should I give myself to someone who is going to hurt me. I know what they did to my brother and I won’t offer myself up for that,” he said. “I didn’t do anything, I don’t know what they want from me, and that means they will hurt me because I have nothing to tell them.”

According to Defence of Children International – Palestine (DCIP), three out of four Palestinian minors “experience physical violence during arrest, transfer or interrogation”.

An Israeli army spokesperson declined to comment on a possible arrest warrant or charges that might be levied against the 12-year-old.

In addition to not sleeping at home, Ramzi also has not been to school during the past seven days. He is afraid soldiers will come to his classroom and take him.

“I’m doing my best to stay away from any place they might know I could be,” Ramzi said, nervously.

His mother, six sisters and three brothers have also decided to sleep at relatives' houses, leaving only Ramzi’s father at home to deal with potential night raids, as they fear Israeli forces will continue their search for Ramzi.

A day after speaking with Ramzi, his father told MEE that he hadn't seen his son since the morning before, but that he had information Ramzi was safe.

For his own safety, Ramzi would not share where he'd been hiding out, but implied that he'd been sleeping outside.

“I miss walking in the streets without being scared, I miss going to school, I miss sleeping at home, I don’t understand this, I just want to come home and be normal,” Ramzi said.

While Ramzi is too young to be involved in politics, his family is known as supporters of the Popular Front for the Liberation of Palestine (PFLP).

Because of PFLP’s efforts, Ramzi’s case has become well known in city. On 30 March, the 40-year commemoration of Land Day, Ramzi’s photo was featured on one of the banners carried in Bethlehem’s commemoration march.

Next to his photo the group wrote a message calling on the international community to save Palestinian children from the Israeli occupation.

According to prisoners’ rights group Addameer, around 406 Palestinian children are currently being held in adult Israeli prison facilities, 108 of whom are under 16.

On average, the group found that about 700 Palestinian children are processed through Israel’s military court system each year.

The most common charge levied against Palestinian children is throwing stones - a crime that under Israeli military law can be punished with up to 20 years in prison.

In a DCIP report, the group accused Israel of having two sets of laws in the occupied West Bank – military law for the Palestinians and civil law for Israeli settlers.

According to DCIP, Israeli military law “fails to ensure and denies basic and fundamental rights,” but is applied to all Palestinian children detained in the occupied West Bank.

The group added that “the majority of children are detained from their West Bank homes during the middle of the night by heavily armed Israeli soldiers”, exactly what Ramzi fears most. 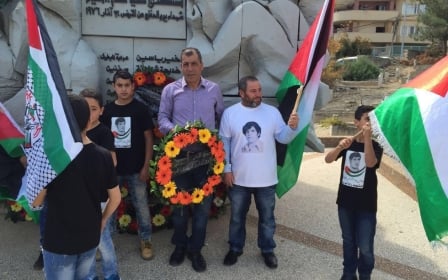