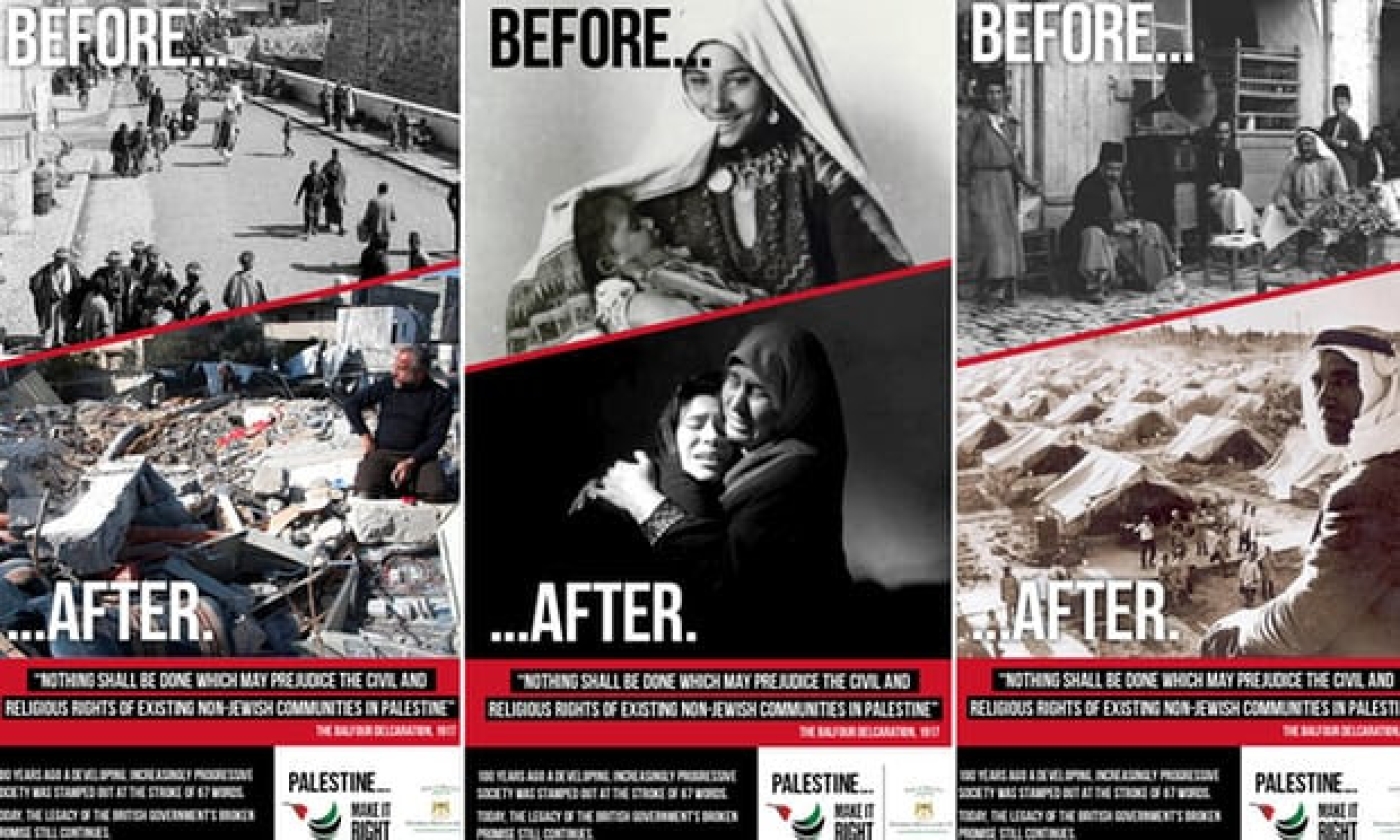 A proposed publicity campaign on London's underground network by a group representing Palestinians in the UK to raise awareness about next month's centenary of the Balfour declaration has been blocked by transport authorities.

The poster campaign, titled "Palestine... Make it Right", was planned to run on prominent digital billboards at several underground stations and on buses in central London from next Monday to highlight the impact of a document considered to have paved the way for the forced expulsion of Palestinians from lands claimed by Israel in 1948.

But the Mission of Palestine, a body that represents the Palestinian government in the UK and the organiser of the campaign, said in a statement on Tuesday that Transport for London (TfL) had rejected it on the grounds that it contravened its advertising policies.

"We are deeply disappointed that TfL refused to run our modest advocacy campaign which aimed to raise awareness, among the British public, about the way the Balfour Declaration affected the Palestinian people," the Mission of Palestine said in a statement.

"It was appropriate and timely to run this campaign as we mark the centenary of the Balfour Declaration, which was instrumental in the forced expulsion of the Palestinians from Palestine who made up 90 percent of the population in 1917."

The Mission of Palestine said that it had expected up to 5.5 million Londoners to see the campaign.

It told Middle East Eye it had written to Sadiq Khan, London's mayor who has responsibility for Transport for London, to complain about the decision.

The Balfour declaration, which is dated 7 November 1917, is a letter from Arthur Balfour, the foreign secretary of Lloyd George’s British government, to Walter Rothschild, the leader of the British Jewish community, which is considered by Zionists to indicate British support for the establishment of a Jewish national home in Palestine, which was then under the control of the Ottoman Empire.

The "Make it Right" campaign planned to contrast images of Palestinians in markets, cafes and towns prior to 1948 with subsequent images showing them living as refugees in camps and amid devastated buildings in Gaza.

The campaign quotes a significant line in the Balfour declaration stating that “nothing shall be done which may prejudice the civil and rights of existing non-Jewish communities in Palestine".

It also adds that "100 years ago a developing, increasingly progressive society was stamped out at the stroke of 67 words. Today, the legacy of the British government’s broken promise still continues".

The Mission of Palestine told MEE that it had sent the images to TfL to check that they did not breach any guidelines, and that no issues had been raised prior to the delivery of the final posters.

TfL told the Mission that the campaign breached regulations which state that advertisments that contain "images or messages which relate to matters of public controversy and sensitivity" will not be approved.

In a statement to MEE, a TfL spokesperson said that “this advert did not comply fully with our advertising guidelines.”

The campaign is the second by the Mission of Palestine to be blocked by TfL.

Last year a poster paid for by the Mission and carrying the "Make it Right" slogan was briefly displayed at Westminster underground station, to mark the 99th anniversary of the declaration, but subsequently removed.

The centenary of the Balfour declaration is set to be marked in the UK by events both celebrating and denouncing its influence.

Israeli Prime Minister Benjamin Netanyahu is expected to visit London on 2 November for a dinner with British counterpart Theresa May and selected dignitaries to commemorate the centenary.

Christian and Jewish supporters are also due to gather at London's Royal Albert Hall on 7 November, commemorating an address given by Balfour in the same venue in 1920.

Opposition to the celebrations are being organised by the Palestine Solidarity Campaign and Stop The War and includes a demonstration in London on 4 November.

“The centenary of the Balfour Declaration reminds us of Britain’s historic complicity in establishing a process that has led to the dispossession of the Palestinian people," PSC director Ben Jamal said in a statement.

"I urge the public to join us on 4 November in calling for Britain to recognise its complicity as well as its responsibilities now, as a key member of the international community, to place meaningful pressure on Israel to end the Occupation, abide by international law and cease its violations of the human rights of Palestinians,” 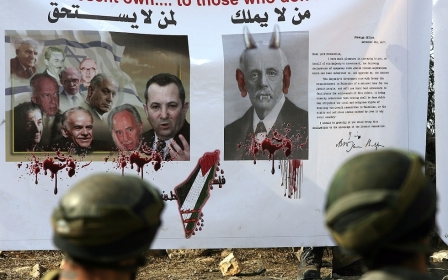 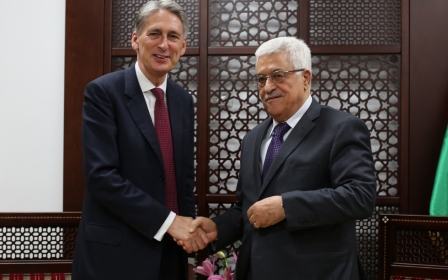