The call to drop Art Israel, an offshoot of the Israeli foreign ministry, from the "kind collaboration" sponsors of the Istanbul Film Festival was made by the Turkey branch of the Boycott, Divestment, Sanctions (BDS) movement.

The producer of 2017 film Wajib, a Palestinian co-production, said the film team had pulled their film from the festival after organisers refused to end Israeli collaboration.

I can't believe that such a festival will collaborate with war crime country to sponsor their festival.

Ossama Bawardi said the entire film crew had cancelled their plans to attend the Istanbul festival, according to BDS Turkey.

The refusal of organisers at the Istanbul Film Festival to end their collaboration with Art Israel even after developments in Gaza has put the spotlight on the festival's backers and also the Turkish government, whose culture ministry is a principal backer of the festival.

For the last two weeks, the Israeli military has killed dozens of unarmed Palestinians from the Gaza Strip, demonstrating peacefully in what they have termed the Great Return March.

Turkish officials have condemned Israeli actions and its use of lethal force.

The Great Return March is a series of non-violent protests being held by Palestinians in the lead up to the anniversary of Israel's independence day, which fell on 15 May 1948, and is called the Nakba (catastrophe) in Palestine.

Mohammad Bakri, the lead actor in Wajib, wrote in a letter: "I am cancelling my visit to your festival as a result of Israel's official collaboration with the Istanbul Film Festival, particularly in the wake of the last Black Friday in Gaza, in which the Israeli army opened fire on innocent people."

BDS's stated goal is to end Israel's oppression of Palestinians and pressure Israel to comply with international law. It seeks to achieve this by campaigning for the international boycott of Israeli products and services, while also seeking to deter global cultural and pop figures from performing in Israel.

May Odeh, a Palestinian producer and director, also announced she would not attend a panel discussion at the Istanbul Film Festival called "Meetings on the Bridge" due to the festival's insistence on having an Israeli sponsor.

"I'm May Odeh a producer/director from Palestine with my deep sadness, will cancel my participation at Istanbul International Film Festival / Meetings on the Bridge, because of the Israeli sponsorship to the festival," she posted on Facebook.

"I can't believe that such a festival will collaborate with war crime country to sponsor their festival. In the name of my colleague in Gaza Yaser Murtaja who was killed by the Israeli military two days ago while he was wearing the press vest, and in the name of all the martyrs and the political prisoners, I'm not going to be at the festival, @Istanbul International Film Festival Shame on you," she added.

The Istanbul Film Festival, now in its 37th year, bills itself as one of Turkey's major film festivals. It kicked off on 6 April and is slated to screen 198 films.

The festival is organised by the Istanbul Foundation for Culture and Arts (IKSV), a trust established by the Eczacibasi corporation.

While Eczacibasi remains the main sponsor, the festival was also backed by Turkey's culture ministry and other official bodies.

The situation could prove to be tricky for Turkey's president, Recep Tayyip Erdogan, and his AKP party, who seek to present themselves as the champion of the Palestinians and their cause.

The only Israel-related film on the festival's screening schedule was Israeli director Savi Gabizon's Longing.

The festival organisers and the culture ministry are likely to face questions on why a Turkish film festival needs an Israeli sponsor, especially when relations between the two remain strained over Israeli actions against the Palestinians.

Neither the culture ministry, IKSV or Eczacibasi were immediately available for comment.

BDS Turkey has also criticised IKSV for continuing to list Art Israel as a sponsor for its Istanbul Music Festival in June. 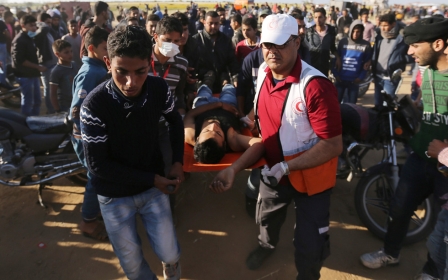