Palestinian Authority under pressure as thousands attend funeral of officer

Amjad Sukkari, who shot three Israeli soldiers on Sunday, was given a military funeral by the PA despite initial hesitation NABLUS, West Bank - The Palestinian Authority's security cooperation with Israel is being pushed to the brink after the recent attack by an off-duty Palestinian staff sergeant who shot and wounded three Israeli soldiers, analysts say.

The Sunday morning attack, which took place at a Ramallah-area checkpoint, was the most recent to be carried out against Israeli forces. The attacker was identified as Amjad Sukkari, 34, from Jamaain village in the northern Nablus district. He was shot dead at the scene.

Thousands of people took to the streets of Nablus on Monday for Sukkari’s funeral after Israeli forces, in what was arguably a surprise move, released his body just a few hours after the shooting.

Two of Sukkari’s brothers, both Palestinian police officers, carried the casket from the Nablus-area hospital to the city’s cemetery as crowds waved flags and chanted “martyr”.

While some PA officials were present at the procession, and some mourners were seen waving Fatah flags, the PA officials have stayed mute on the matter. Several PA offices, including the PA’s security spokesperson Adnan Dmiri, all declined MEE’s repeated requests for comment.

In stark contrast, Hamas and Islamic Jihad have both come out in support of Sukkari, publically endorsing his actions and calling them a natural reaction of occupation.

“This attack showcases the rejection of security coordination with the occupation, even among members of the PA security forces,” Hamas movement's spokesman, Sami Abu Zuhri, said on Sunday.

Mazin Qumsiyeh, a Palestinian professor at Bethlehem and Birzeit Universities and political activist in the occupied West Bank, told MEE that the incident has brought the PA one step closer to having to choose between the will of the Palestinian people, and the government’s security coordination with Israel agreed as part of the Oslo Peace accords.

“One cannot please two masters,” Qumsiyeh told MEE. “They [the PA] have to choose a side, they cannot have both.”

The apparent uncertainty seems to be reflected by the PA’s response to the killing. Sukkari’s brother, Majd, told MEE that PA officials did not show up at the hospital in Ramallah where his brother’s body was held for several hours after the incident.

Normally, Majd explained, an official would have made an appearance after the death of an officer, particularly a high-ranking officer who was shot dead by Israeli forces. However, the PA chose to honour him with a military funeral, a move that was in question until a few hours before the burial.

According to Islamic rites, a body should be buried on the day of death before sunset, but the funeral was delayed in order to wait and see if the PA would come through with the official burial, his brother told MEE.

Qumsiyeh said the decision to hold a military funeral was very much a political one, explaining that the move “sheds light on [the PA]. They had to choose, they could not continue to play this role in between. At some point [the PA] has to make a real choice.”

“They are acting as subcontractors for the occupation, but also want to appear nationalistic,” in order to keep control of occupied West Bank, Qumsiyeh said.

In recent months, support for the PA and its president, Mahmoud Abbas, has plummeted, as the government has failed to appease both the Israeli government and the Palestinian populace.

The shooting was the second incident perpetrated by a lone actor employed by the Palestinian Authority (PA) since the latest spate of upheaval in Israel and the occupied territories began last autumn.

At the start of December, Mazin Ureiba, a Palestinian intelligence officer, was shot dead after shooting and injuring an Israeli soldier near Hizma on the outskirts of the district of Ramallah. It was later revealed that Urbeiba was the nephew of Saeb Erekat, the secretary-general of the Palestine Liberation Organisation (PLO) and chief negotiator between Palestine and Israel.

“We thank God that wasn’t the case and they gave us my brother’s body,” Sukkari’s younger brother Majd, also a Palestinian police officer, said.

In December, the Ramallah-based Palestinian Center for Policy and Survey Research (PCPSR) found that 67 percent of Palestinians supported the recent wave of stabbing attacks against Israelis, while two-thirds of Palestinians are demanding Abbas resign.

According to PCPSR, around 64 percent of Palestinians said they oppose the PA’s security coordination with Israel, even if that means losing access to the 82 percent of the occupied West Bank in Areas B and C, which fall under full and partial Israeli control in accordance with the Oslo agreement.

In January, the PA came under fresh attack for statements made to the New-York based Defense News website by the PA’s head of intelligence Major General Majid Faraj, who claimed that since the start of October his office had prevented 200 attacks against Israelis by confiscating weapons and arresting around 100 Palestinians.

A leader of the Popular Front for the Liberation of Palestine (PFLP), Mahmous al-Ras, said Faraj’s statements were “shameful” and proved that the PA security apparatus is a “gun for hire that protects the security of armed settlers” over its own people.

While the PA struggles to garner support from its own people, the Israeli government has continuously accused the PA of incitement against Israel.

Israeli forces have documented 115 attempted and actual stabbings, 40 shooting incidents and 23 car ramming since 14 September. According to Maan news website, more than 160 Palestinians, including many alleged attackers, have been killed by Israeli forces or settlers, while over 20 Israelis have also died in attacks.

Speaking on the condition of anonymity out of safety concerns, a neighbour who grew up with Sukkari said his family and community fully supported the police officer’s actions.

“Everyone is proud of him, and I am proud of him,” his neighbour said. “He did something real, something for the people who have been killed [who] were not able to carry out their attacks, but Amjad was in a position to do something real and he took that opportunity.”

Sukkari worked as a guard for the attorney general's office in Ramallah, and frequently crossed the checkpoint where the incident took place.

A friend of the family who also did not want to give his name for security reasons told MEE that he believed that Sukkari snapped after reportedly being stopped by Israeli security at the checkpoint.

“He did cross through that checkpoint everyday, and everyday he saw [Israeli soldiers] treating Palestinians like animals at the checkpoint, not like a human,” the friend said.

Majd, however, said he simply couldn’t understand his brother’s actions precicely because “he crossed through that checkpoint everyday”.

Majd did not support or condemn his brother’s attack, but said he was shocked by the incident.

“He had a lovely heart and when he was home he was always playing with his four kids, he was always following the news, sure, but I never knew him to be overly political to do something like this,” Majd said. “It was a very big surprise for us all.”

After Sunday’s attack Israeli forces closed off Ramallah city, the occupied West Bank’s most central city hub, in what residents have described as the biggest closure the city has seen since the Second Intifada.

The closure continued until late Monday. Palestine state
France to recognise Palestine if no progress on two-state solution: Report 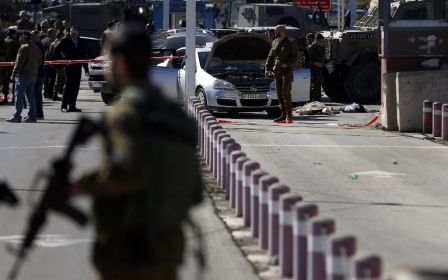