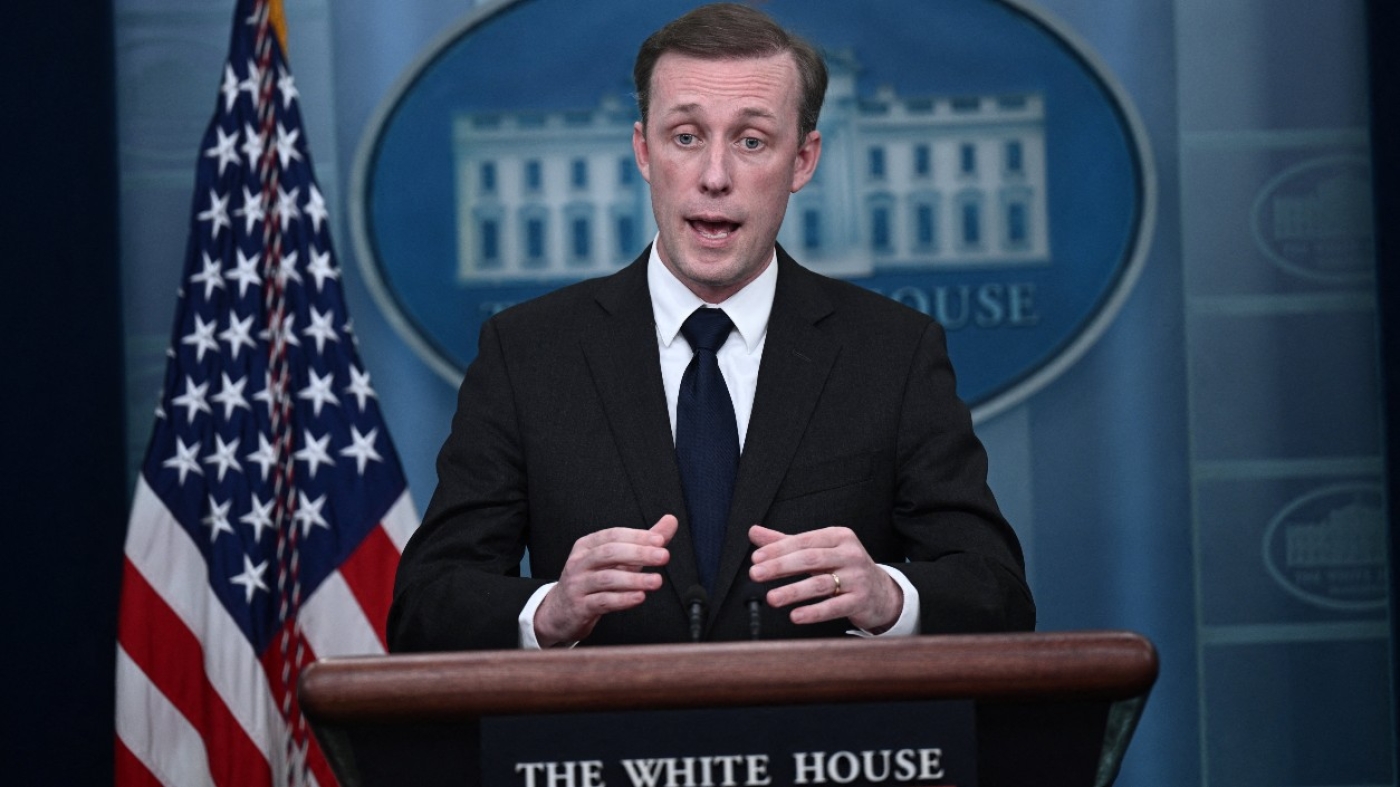 US national security adviser Jake Sullivan speaks during the daily briefing at the White House, on 12 December 2022 (AFP)
By
Umar A Farooq
in
Washington

Jake Sullivan, the White House's national security adviser, is on a trip this week to Israel and the occupied West Bank, where he has engaged in the highest-level talks since the new government in Israel, described as the most right-wing ever, took power.

In a White House readout of his trip, a spokesperson said that Sullivan reaffirmed "the US administration's interest in strengthening engagement with the Palestinian Authority and deepening ties with the Palestinian people", and continues support for a two-state solution.

"He also discussed the need for Palestinian leaders to help de-escalate tensions in the West Bank and to strengthen Palestinian institutions. Finally, they exchanged views on measures to build trust, enhance security, and foster conditions for a political horizon," the readout stated.

Several Palestinian policy experts who spoke with Middle East Eye, however, were largely apathetic towards the visit, saying the Biden administration and its approach towards Palestinians have only led to a worsening situation in the occupied Palestinian territories.

"Jake Sullivan's visit to Israel is not aimed at improving life for Palestinians or supporting a peace process in any meaningful way," said Tariq Kenney Shawa, a US policy fellow at Al-Shabaka.

"While the Biden administration has made it clear that Israel's new leadership, which has openly called for ethnic cleansing of Palestinians, does not impact the 'special relationship', it is in Washington's interest to maintain calm that will allow Israel to continue oppressing Palestinians without further international attention," he told MEE.

The trip to Israel comes as the White House has expressed concern about the Israeli government's policies in the occupied West Bank, including plans to expand illegal settlements, legalise outposts and effectively annex the territory.

During the visit, US ambassador to Israel Tom Nides said the US would link Israel's acceptance into a visa waiver programme with Israel's lifting of restrictions on Americans travelling to and from Israel.

Israeli news outlets also reported that Prime Minister Benjamin Netanyahu and Defence Minister Yoav Gallant called off a technical move to split part of an existing West Bank settlement into a separate local council, fearing it could anger the US.

Yet the moves were seen largely as inconsequential by Palestinian experts and rights activists, who noted that the last year had been one of the most violent years Palestinians have faced in the past several decades.

Over the past two years, Israeli settlements in the occupied West Bank have continued to grow. In May 2022, the Israeli government announced a plan to create 4,000 housing units for West Bank settlements.

"The rot at the core of the Israeli government and the growing anti-Palestinian extremism we’re seeing take hold in Israeli political discourse are on a trajectory that will lead to a lot more Palestinian suffering."

The election of US President Joe Biden at first seemed like a welcome change from four years of Donald Trump, who made a number of concessions to Israel including moving the US embassy from Tel Aviv to Jerusalem and brokering normalisation deals between Israel and several Arab countries.

But two years into office, Palestinians saw the 2021 bombing of Gaza for several weeks, near-daily raids on Palestinian villages, and the killing of Palestinian-American journalist Shireen Abu Akleh by Israeli forces. 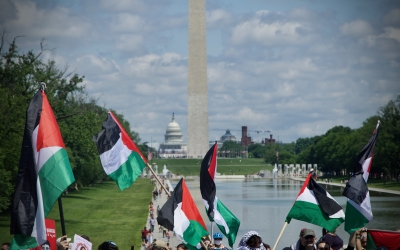 Last year was the deadliest year for Palestinians in the West Bank since the second Intifada, with at least 220 Palestinians having been killed by Israeli forces, according to data compiled by MEE.

Despite the major outcry over Israel's treatment of Palestinians - during Biden's time in office multiple human rights organisations labelled Israel's practices as a form of apartheid - the Biden administration has continued to support Israel with minimal criticism.

After Israel's bombardment of Gaza in 2021, which killed more than 250 Palestinians, the US approved $1bn in funding for Israel's Iron Dome missile defence system. Following the killing of Abu Akleh, the Biden administration was accused of trying to bury the killing by issuing a statement that appeared to absolve Israel of wrongdoing.

And when it became known that the new Israeli government would be the most far-right in history, US Secretary of State Antony Blinken said that Washington would judge the government based on its policies. The remarks were condemned by Palestinians and progressive Jewish voices who have raised the alarm about the new government.

"In principle, the Biden administration is certainly capable of achieving something positive for Palestinian rights. The problem isn’t ability, it’s lack of political will," said Abuirshaid.

"Unfortunately, the Biden administration seems resigned to old thinking, providing unconditional support for Israel even at a time when the majority of Democrats oppose such a policy."

Abuirshad calls this a "glaring disconnect" between the Biden administration and the will of the American people, particularly Biden’s own Democratic base.

Laura Albast, senior editor of digital strategy and communications at the Institute for Palestine Studies-USA, said that while the administration has only continued its unconditional support for Israel, the current government's approach to Israel does not reflect the views of most young Americans.

Over the past several years, polling has helped to reveal a growing rift between the loyal support from Democratic politicians and the views held by the Democratic Party voter base on the Israeli-Palestinian issue.

In 2021, Data for Progress reported that 72 percent of Democrats approved of Congresswoman Betty McCollum's legislation to restrict US funding to Israel used to detain Palestinian children or to demolish Palestinian homes in the occupied West Bank, including East Jerusalem.

A poll from Pew Research Center last May found that a majority of US adults under 30 years old, 61 percent, have favourable views towards the Palestinian people.

Another poll from April 2022 showed that fewer than one percent of Democratic voters view Israel as one of Washington's top allies.

Jewish Americans have also been more critical of Israel in recent years, with 25 percent of US Jewish voters agreeing to the statement, "Israel is an apartheid state", according to a July 2021 poll conducted by the Jewish Electorate Institute.

"Democratic voters who have recently woken up to Israeli crimes and ineffectiveness of the American government when it comes to foreign policy, they need to elect not just members of Congress and senators, but also push presidential candidates who can get rid of the current establishment of Democrats like Biden, who, just like the Republicans, takes his marching orders from Aipac," Albast said. 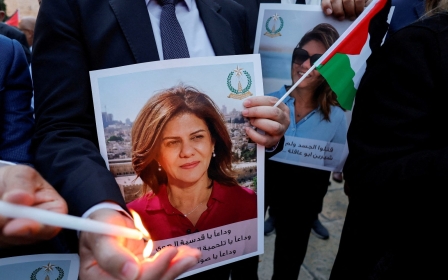 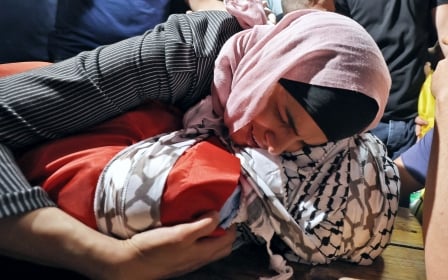 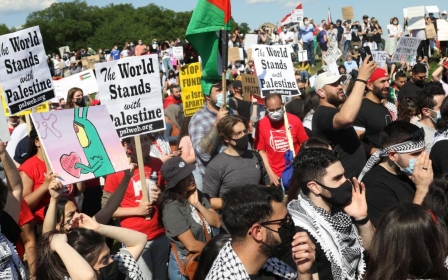 Politics
Fewer than one percent of US Democrats view Israel as top ally, poll finds