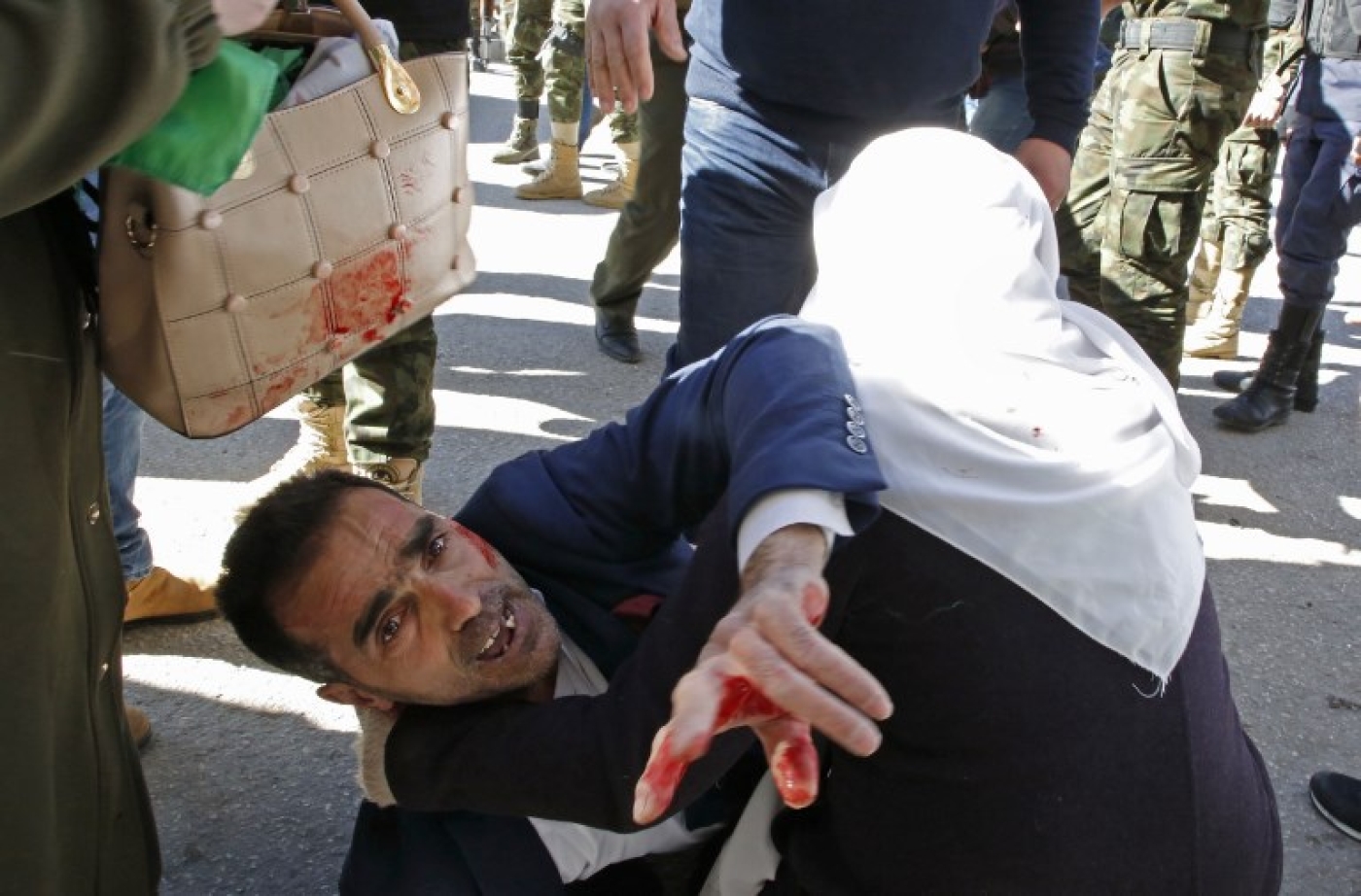 Jamal Karameh, a Palestinian former prisoner, beaten by PA security forces in Hebron during a protest on 14 December (AFP)
By
Shatha Hammad

HEBRON, Occupied West Bank - Jamal Karameh’s teeth were knocked out when members of Palestinian Authority forces attacked him with batons in the southern city of Hebron in the occupied West Bank on 14 December.

Karameh, 50, was participating in a peaceful march against the increase in Israeli military operations in West Bank towns last week. The protest was planned to take off from downtown Hebron and head towards Bab-al-Zawiya, some 2km away.

Karameh was sporting a formal navy blue jacket, white shirt and red tie; he was planning to attend a relative’s wedding after the march, which took place following Friday prayers.

What is required of the PA security forces is to protect these rallies and not constrict them or use force against them.

He told Middle East Eye that members of the PA's security forces then began suppressing the march, dragging him and trying to push him into a civilian vehicle. When he tried to resist, they surrounded him and beat him all over his body, including his head, with batons.

Moments later, his wife Hanaa ran towards them and threw herself onto her husband, trying to protect him and hoping to block the blows.

Karameh, who spent years in Israeli jails, and has been arrested and summoned by PA's security services on several occasions, had his house raided at night by the Israeli army in October.

Karameh's daughter, Janeh, said in a Facebook post that the PA forces attack on her father reminded her of Israeli raids in which her father and mother were arrested and her brother was beaten.

Karameh told Middle East Eye that his 12-year-old son was with him when the PA attack happened.

'They did not care'

“They did not care, and continued beating me until a group of journalists took notice and came quickly to document the assault. At that moment, the security forces stopped,” Krameh said, adding that he has bruises all over his body and suffered cuts to the head and some of his lower and upper teeth fell out.

Karameh was not the only one who was assaulted during the PA’s dispersion of the march, which had brought together dozens to mark the 31st anniversary of the foundation of Hamas, the Palestinian armed resistance group which controls Gaza.

Relations between Hamas and Fatah, which governs the PA from Ramallah, have been severely strained ever since the former won legislative elections in 2006 and a year later took over Gaza following violent clashes.

PA forces proceeded to assault women and children who were taking part in the march and prevented journalists from filming and taking photographs, witnesses say.

PA security forces began throwing sound bombs directly at people. They then began attacking the men, beating them and arresting them

Sari Jaradat, a journalist who was covering the march, said that dozens of Palestinian security forces were deployed to the area and declared it a closed military zone, despite there being no reason to do so.

“It was a peaceful march and the participants did not exceed more than 50 people, including many women and children.

"They marched for about 50 metres before PA security forces began throwing sound bombs directly at people. They then began attacking the men, beating them and arresting them,” Jaradat told MEE.

The journalist explained that the security forces surrounded journalists and threatened them not to approach or film.

Journalists who were working for governmental media were also purposefully obstructing the work of other journalists by standing in front of their cameras and blocking visibility, said Jaradat.

Another local reporter at the scene, Abd al-Mohsen Shalalda, said that while he was covering Karameh's assault, two security agents dragged him and beat him with batons. They tried to push him into a nearby vehicle in hope of arresting him.

“When the situation became tenser, and the assault on Karameh intensified, they left me and ran back to him,” Shalalda told MEE.

Similarly, Malek al-Jaabari, a media student training at a local media station, was subjected to assault, which ended with his arrest. Jaabari was released after more than two hours.

“I saw more than 20 men in the detention centre, including elderly men who had been arrested during the suppression of the march. Most of them were arrested by men in civilian clothing who took them to the station in civilian cars,” Jaabari told MEE.

But the PA’s excessive use of force did not only occur in Hebron. In the northern city of Nablus, security forces crushed a similar march on the same day and prevented journalists from covering the event.

Translation: Palestinian security forces attack women and arrest tens of people while preventing journalists from filming while suppressing a march of Hamas movement in Hebron.

Earlier this year, in June, a march in Ramallah city demanding the lifting of sanctions imposed by President Mahmoud Abbas on the Gaza Strip had a similar fate. At the time, PA forces blocked the rally from reaching the PA’s presidential compound and the headquarters of the Palestine Liberation Organisation.

Since the clashes in 2007 between Hamas and Fatah, numerous attempts at reconciliation have failed. Hamas members in the West Bank have faced higher rates of detention at the hands of Israeli forces - some say in part due to the PA's security coordination with Israel.

The Popular Front for the Liberation of Palestine (PFLP) political party responded to the PA’s actions against the rallies in Hebron and Nablus, in a statement saying the assaults were a “disgrace to the leadership of the Palestinian Authority and its security services”.

The party called on the security services to provide protection to the Palestinian people by preventing attacks by the Israeli army and settlers, rather than restricting freedoms and repressing peaceful protests.

The Palestinian Bar Association also condemned the PA’s response. In a statement on 14 December, the association urged the ruling Fatah political party to investigate the events, highlighting that freedom of assembly and expression are guaranteed by basic law and should not be violated under any circumstances.

Majed Arouri, a journalist specialised in human rights and law, said that freedom of expression must be protected at all costs, even during emergency situations.

He told MEE that peaceful protests, like the one in Hebron, did not constitute any justification for the use of violence and excessive force by PA forces.

“The suppression that took place in Hebron confirms that the security forces used extreme force, that requires investigation because it is a worrying indicator of the reality of freedom of expression in Palestine,” said Arouri.

Under Palestinian law, continued Arouri, freedom of expression is fully guaranteed, including the right to gather and protest peacefully. “What is required of the PA security forces is to protect these rallies and not constrict them or use force against them.”

The security forces defended their actions, saying that the marches aimed to criticize the PA and its president, Mahmoud Abbas.

In media statements, spokesperson of the security forces Adnan Dmeiri said batons and sound bombs were not violent tools, and that therefore there was no use of force in the suppression of the marches.

The reason that the PA suppressed the march, said Dmeiri, was that “it was called for by Hamas against the PA and not against the occupation”.

How can we stay quiet when there is an invitation for a march against the PA and the security forces?

“How can we stay quiet when there is an invitation for a march against the PA and the security forces?” he said, but added that there would be an investigation into any complaints against security agents.

Arouri said that Hamdallah promised to open an investigation into the events.

Speaking to MEE, Khalil Assaf, head of the Consortium of Independent Palestinians, a grassroots association of businessmen and academics, said: “What happened in Nablus and Hebron has no justification. It is the people’s right to express their thoughts and feelings, and it is a protected right in Palestinian law and international treaties.

“A security agent should maintain the law and not violate it." 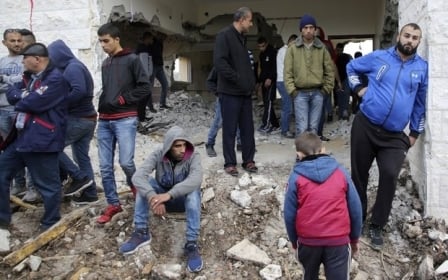