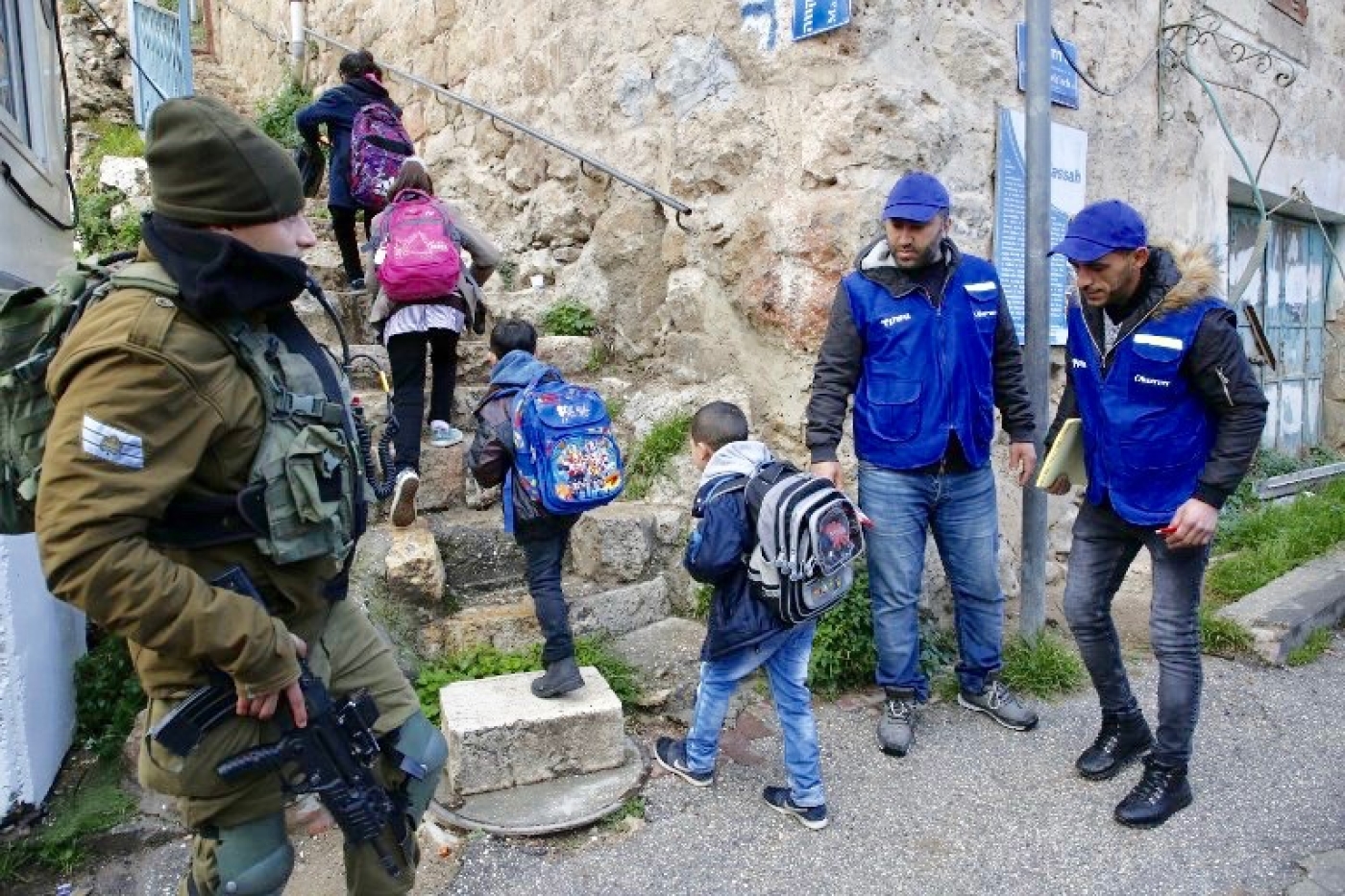 Israeli soldier, left, watches as Palestinian activists escort children to school in Hebron on Sunday (AFP)
By
MEE and agencies

Palestinians in the occupied West Bank city of Hebron walked children to school on Sunday, saying protecting them from Israeli settlers was necessary following the withdrawal of international monitors.

Israeli Prime Minister Benjamin Netanyahu announced last month he would not renew the mandate of the Temporary International Presence in Hebron (TIPH), accusing it of bias. The mission left on 31 January.

It was established after a massacre of Palestinians in 1994 and Palestinian officials warned that the withdrawal of the international monitors could increase abuses by settlers in the city.

Palestinians in Hebron accused Israel of trying to rid the flashpoint city of witnesses to its actions in the occupied West Bank by ejecting a foreign observer force that helps safeguard residents, Reuters reported.

“The settlers’ attacks will increase,” said Aref Jaber, a Palestinian resident of Hebron. TIPH’s presence was particularly helpful to schoolchildren, he added, because they patrolled the city “in the morning and the afternoon, when they go to and return from school.”

On Sunday, Palestinians from the Youth Against Settlements organisation accompanied children to schools in vests with the word "observer" written in English, Arabic and Hebrew, an AFP photographer said.

"Today we started a local campaign to document violations that children going to school are subject to in this area where there are always settlers and the occupation army," said Issa Amro from the activist organisation. "We will not replace the international observers, but we try as much as we can to make sure that the children go to school."

Small scuffles broke out between Israeli settlers, the Palestinians and Israeli soldiers during the walk, the AFP journalist said.

TIPH was created after 29 Palestinian worshippers in a mosque were gunned down by an American-born Israeli settler.

Observers carried out daily patrols and documented rights abuses they witnessed, although they were not allowed to intervene.

The mission reported its findings to its member countries - Italy, Norway, Sweden, Switzerland and Turkey - as well as the Israeli and Palestinian authorities.

Hebron is holy to both Muslims and Jews and has been a flashpoint in the Israeli-Palestinian conflict. A Palestinian city of 200,000 people, Hebron is also home to a community of about 1,000 Israeli settlers who are guarded by a large Israeli military presence, according to Reuters.

Israeli settlements are seen as illegal under international law and a major obstacle to peace, as they are built on land the Palestinians see as part of their future state.