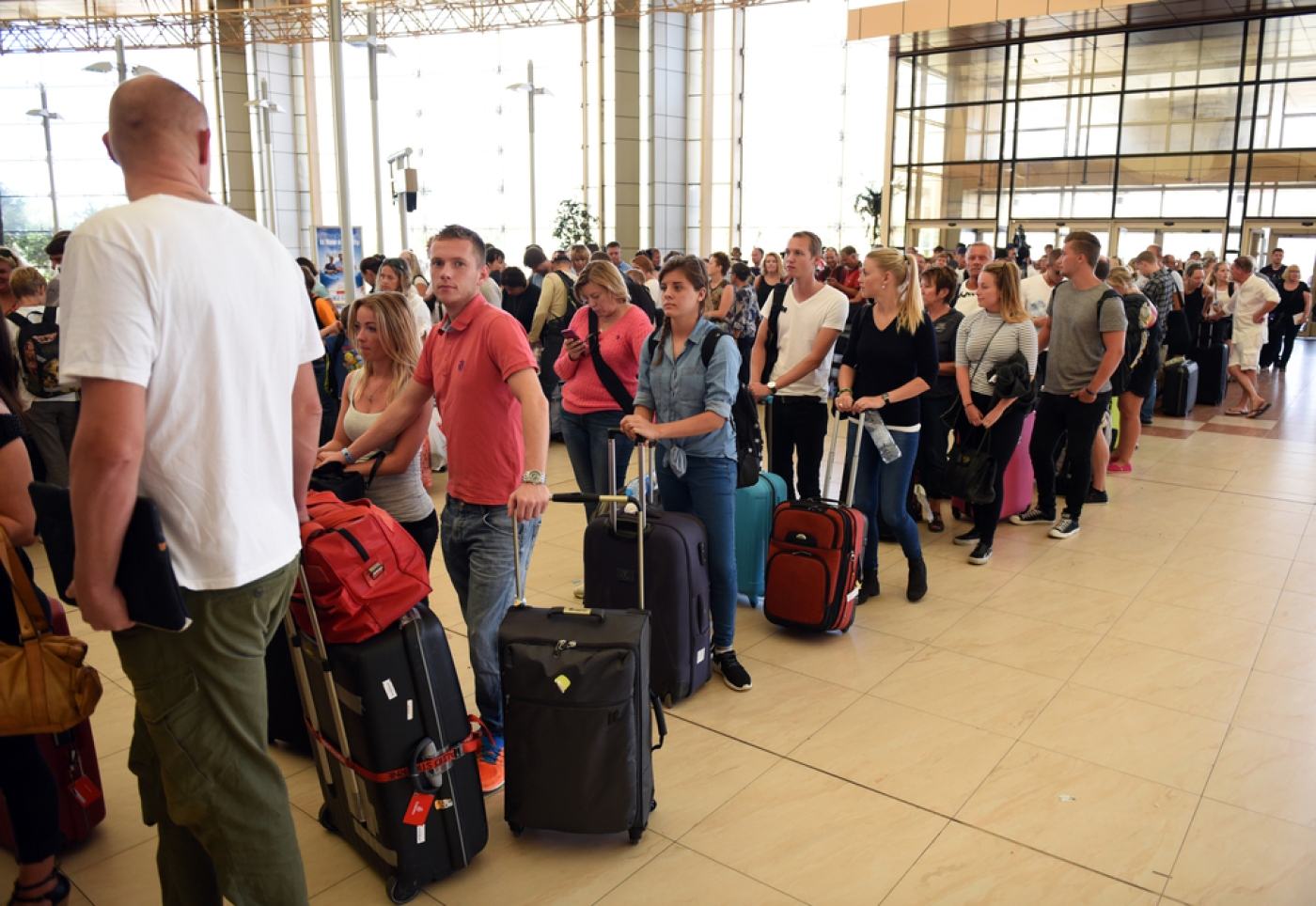 Concerns have been raised over security conditions at the airport where Russian airliner KGL9268 set off before crashing in Egypt's Sinai peninsula.

A British tourist told the Independent that he had been "offered the chance to pay £20 to skip queues and baggage checks" at Sharm el-Sheikh airport when he visited earlier in the year.

Dale Parkyn, a 47-year old from Yorkshire in the UK, said he and his wife had been approached by a man in military uniform and offered a chance to skip security.

"What we did is we discussed it and he then produced a £20 note and said, 'Have you one of these' and you can avoid the queue.”

A British government spokesperson told the Independent that there was an "assessment of the security arrangements in place at the airport and to identify whether any further action is required."

On Friday it was announced that Egypt had arranged 29 planes to bring home stranded British holidaymakers, but that they will be prevented from taking hold luggage on the flight.

Large crowds gathered at the airport anxiously awaiting word of when they could fly home after Britain announced it would lift the suspension of flights out of Sharm that it imposed on Wednesday.
"Sixty-four flights are planned out of Sharm el-Sheikh today, including 29 organised by British companies to take home British tourists whose holidays have ended," civil aviation ministry spokesman Hossam Kamal said in a statement.
Heightened fears over security on flights leaving Egypt has led to emergency measures from other airlines.
Dutch airline KLM also on Friday banned checked luggage on an early flight from Cairo to Amsterdam.
Passengers were only allowed to board flight KLM 554 with hand luggage, the airline said in a statement, adding that "based on national and international information and out of precaution KLM will not allow check-in luggage."

EasyJet announced that it was halting its repatriation flights out of Sharm el-Sheikh, due to a decision by the Egyptian authorities.

"The situation in Sharm el-Sheikh has changed and rescue plans that were put in place yesterday have been suspended by the Egyptian authorities. Discussions are currently on-going at the highest political level to resolve this situation," the company said in a statement on its website.

"We are very sorry and understand that this is extremely frustrating for you – unfortunately the situation is outside of easyJet’s control. Please stay or make your way back to the hotel you have been staying in, and be assured we will pick up the cost of this."

Pro and anti-Sisi demos in London

The news comes as Egyptian President Abdel Fattah al-Sisi continues his three-day visit to the UK.

Protesters both supporting and opposing the visit gathered outside Downing Street during the visit.

The opposing camp, largely organised by the Stop Sisi campaign group, have accused UK Prime Minister David Cameron of appeasing a dictator and called for the invitation to the UK to be rescinded.

Sisi supporters hailed him as a bulwark against "terrorism".

"My role is to act in the right way to keep British citizens safe and secure and to put their security first," he told reporters.

He mooted the possibility that the plane had been brought down by a bomb, defending the steps he took in response.

"If the intelligence and the judgement is that it was the more likely than not outcome, I think it was right to act in the way I did," he said.

US President Barack Obama also raised the possibility on Thursday that a bomb brought down the plane.

"I think there is a possibility that there was a bomb on board and we are taking that very seriously," Obama told a US radio station, while emphasising it was too early to say for sure.

"We're going to spend a lot of time just making sure our own investigators and own intelligence community find out what's going on before we make any definitive pronouncements. But it's certainly possible that there was a bomb on board," Obama told the Seattle-based station.

And CNN cited multiple US officials as saying that according to the latest intelligence, a bomb planted onboard most likely caused the plane crash.

One official told CNN an employee at Sharm el-Sheikh airport may have assisted in helping to plant the bomb.

"This airport has lax security. It is known for that," the official said. "But there is intelligence suggesting an assist from someone at the airport."

With concerns over security mounting, a number of European airlines readied to bring home thousands of tourists from the Red Sea resort of Sharm el-Sheikh, where the plane took off last Saturday.

The Islamic State (IS) group has claimed responsibility for the disaster, in which the Saint Petersburg-bound jet crashed minutes after taking off, killing all 224 mainly Russian tourists on board.

The Times newspaper reported on Friday that electronic communications intercepted by British and American spies suggested a bomb may have been carried onto the plane.

"The tone and content of the messages convinced analysts that a bomb had been carried on board by a passenger or a member of the airport ground staff," the newspaper reported, without giving a source.