An Israeli borderpoliceman has died from injuries sustained after a van hit a group of pedestrians at a light rail station in Jerusalem on Wednesday, MEE's contributors in Jerusalem report.

Thirteen people were also injured in the attack.

Israeli police shot and killed the suspected driver of the van and told MEE's contributors that they are treating the incident as "a terror attack".

After the driver hit pedestrians, he reportedly tried to flee in his van, hitting several cars in the process, while Israeli police shot at him, according to an eyewitness at the scene.

"I was waiting for the red light to change to green," the eyewitness told MEE. "He tried to push someone with his car and crashed into another spot."

The driver was reported to be Ibrahim al-Akri from the Shuafat neighbourhood of East Jerusalem, according to army radio, which also claimed he was a member of Islamic Jihad.

Haaretz also reported that Al-Akri was the brother of a Palestinian exchanged during the 2011 Gilad Shalit prisoner swap.

Al-Akri's body lay on the ground as hundreds of people gathered near the scene which occurred in the Sheikh Jarrah neighbourhood, an area where many Palestinians live that falls between East and West Jerusalem.

The location is in close proximity to the location where 21-year-old Abed Abdel Rahman Shaludeh hit several pedestrians, killing a baby and injuring six others, on 22 October.

A Hamas official Mushir al-Masri was quoted by Ynet as saying the attack was revenge "for al-Aqsa and for the blood of those who guard Al-Aqsa".

The Ma'an News Agency quoted another Hamas spokesperson, Sami Abu Zuhri, describing the attack as a "natural response" to Israel's policies in Jerusalem.

"Abu Mazen [Abbas] is the driver of the death car and the terrorists his emissaries," Bennett said. "Israel needs to say clearly that the Fatah-Hamas government is a terror organization and we need to act accordingly."

Tensions have been running particularly high in the city since the attempted assassination of right-wing Israeli activist Yehuda Glick last week followed by the killing of suspected shooter Mu'taz Hijazi. As a result, the al-Aqsa complex was closed last Thursday for the first time in many years.

"You can't imagine the tension here," the eyewitness told MEE.

Earlier Wednesday, clashes occurred between Israeli police and Palestinian worshippers inside the complex, after which Israeli settlers entered. 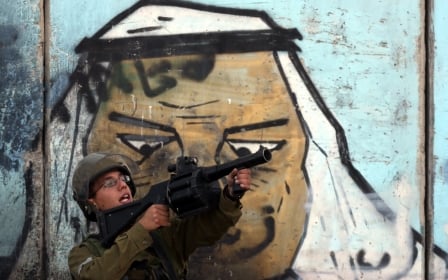