The politics of Hajj quotas: 'What would Allah say to this?' 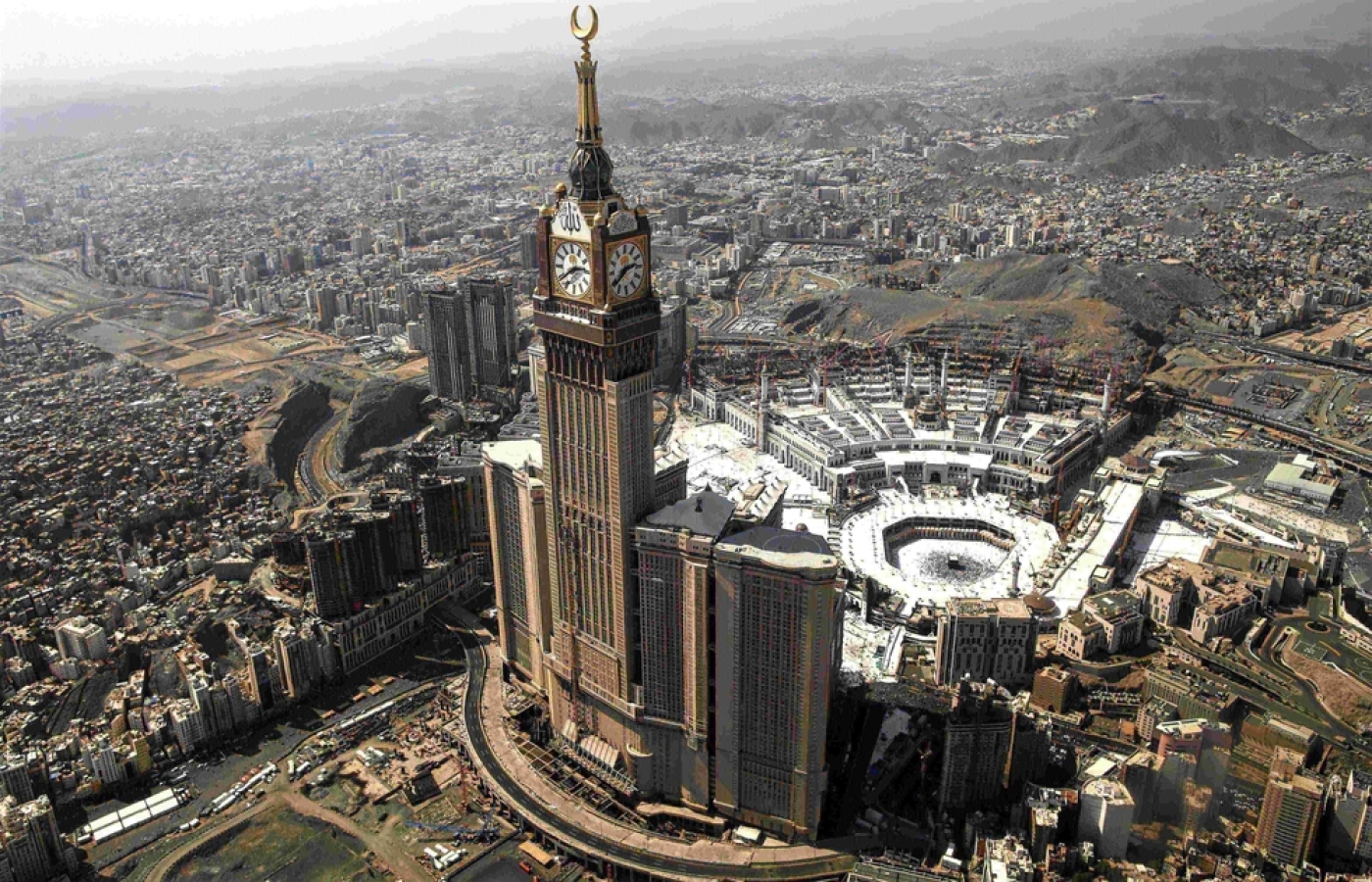 The Clock Tower and Grand Mosque in Mecca in September 2016 (AFP)
By
Areeb Ullah
, Mohammad Ayesh

Ismail Mahmud left his home in Minya, Egypt, and headed for a neighbourhood cafe to write his will. He was diagnosed with a life-threatening illness two years ago and knew his time in this world was short. He had one final wish: to complete the Hajj in Saudi Arabia, but obtaining a visa to do so has come at a high price.

I put myself down for a visa to work at the Hajj as a cleaner just so I can get into the country. It was the only way

"My sons were not happy when I sold these fields, but we had no choice," said Mahmud, a 59-year-old primary school teacher. "The economic conditions in Egypt have become very difficult and they refused to give me a visa, even with a note from my doctor. It was the only way to pay for my dream to do the Hajj."

Mahmud refused to wait and see whether his name would be picked out of a government-run lottery, entitling him to attend. Instead, he went one step further.

"Everyone said getting picked by the government was impossible unless you paid high officials, but I just couldn't afford it," he said. "So I put myself down for a visa to work at the Hajj as a cleaner just so I can get into the country. It was the only way."

The problem with Hajj quotas

Like thousands of Egyptians, Mahmud has waited years to go to the Hajj. His situation is not uncommon, with millions of Muslims worldwide turning to private travel agents or other means via the black market.

The Hajj is one of the five pillars of Islam and one which all Muslims are obligated to complete at least once, meaning that visas are hotly contested.

Those who undertake the five-day pilgrimage are absolved of all their past sins, meaning many look to attend during their old age.

Saudi Arabia sets the quotas, based on the population of Muslims in each country, which in turn - through governments or private travel companies - allocate places for their citizens.

The long wait times, which can be up to 10 years or longer in some countries, lengthened after Riyadh cut the overall quota of visas by 20 percent in 2009 to accommodate expansion work in the grand mosques in Mecca and Medina. It has now reversed the decision, so an additional million pilgrims can now attend the pilgrimage, which this year begins on 30 August.

The rise in numbers comes after the Gulf kingdom suffered a decline in oil prices as well as the lowest number of pilgrims in a decade in 2016. It will boost the economies in Mecca and Medina.

The lottery of obtaining a visa

The governments in most Muslim-majority countries allocate the largest chunk of their places via a random lottery and give the rest to private travel agents. In the UK and elsewhere, tickets are sold via private travel agents on a first-come, first served basis, depending on eligibility.

The biggest problems come in countries such as Indonesia, which is usually awarded the largest number of visas - it  has a Muslim population of 260 million.

Like many countries with inflated waiting times, it celebrated the addition of an extra 10,000 places on top of the 220,000 already allocated by praising the Saudi authorities.

Indonesia uses a lottery system to allocate the majority of its places: each applicant pays $2,000 to be considered - the average monthly wage is around $1,200 - and is then put on a waiting list. Even so, locals still face a wait of up to 39 years, meaning some pilgrims die before they win a place.

Other countries take tough measures to be fair and reduce waiting times. Jordan only has 7,000 places to fill this year. Its rules include automatically accepting prospective pilgrims who were born in 1945 or before and demanding that potential pilgrims swear on the Quran that they have never previously attended the Hajj.

The year-of-birth rule is adjusted annually to give elderly applicants a better chance of winning a place, meaning that next year those born on or before 1946 will be eligible to attend. Exceptions are granted to male guardians, such as a son or husband, who are accompanying a female pilgrim. 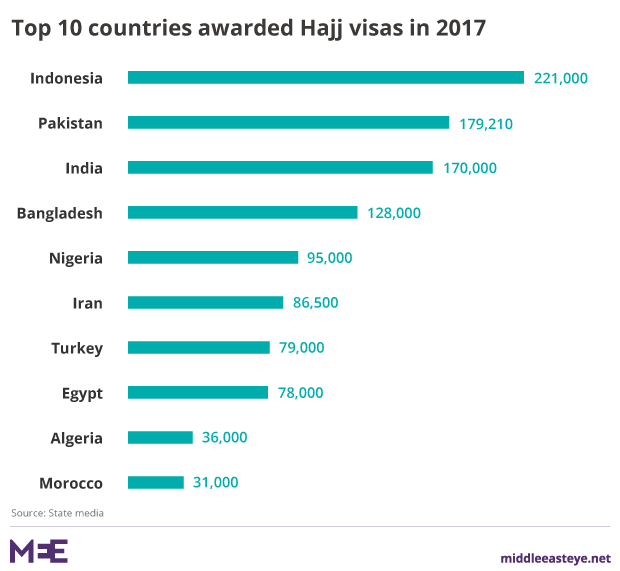 Bouthaina Naser, 40, a housewife from the north of Jordan, has tried numerous times to obtain a visa, without success. She began thinking about the Hajj after being diagnosed with cancer five years ago and every year since has applied for a visa.

Frustrated at the Jordanian restrictions, she was forced to turn to the black market to achieve her "dream of doing the Hajj".

"I tried three times to buy Hajj visas from the black market and through people who knew someone selling them from the Saudi embassy," she told MEE. "The Jordanians should allow people to attend if they have the financial ability to go and assess it on a case-by-case basis."

Critics accuse the Saudi authorities of politicising the Hajj and helping create a global black economy in visas, with the allocation process in some countries being described as rife with corruption and unfair to poorer pilgrims.

Pakistan, which receives the third-highest quota, was recently rocked by a corruption scandal after prospective pilgrims accused officials of giving a portion to private companies in exchange for bribes.

In Bangladesh, the high court has demanded an investigation into how the government managed this year's allocation after some travel agents delayed submitting visa applications in the hope of receiving cheaper rates on accommodation in Mecca and Medina. It has left some Bangladeshis who won on the lottery still uncertain as to whether they will be attending.

Madawi al-Rasheed, a Saudi academic based at the London School of Economics, told Middle East Eye that the al-Saud clan had created a "black economy around the world which is centred on the Hajj".

"The lack of transparency in Saudi Arabia, especially with the quota system, has helped create a black market and trade in visas," she said.

"There is a black market in visas where Saudi embassy employees from around the world sell visas illegally and give them to their friends. They have a certain interest in getting certain people in and excluding others or putting them on a waiting list for the rest of their lives."

Hajj: An arena for political fighting

Riyadh justifies the quota it sets as a means to ensure the safety of all pilgrims. The Hajj has been hit by numerous incidents over the years, which have resulted in the deaths of pilgrims, usually through overcrowding.

The most recent incident, a stampede in 2015, left at least 2,000 people dead, although the final death toll has been disputed.

Some observers have characterised the quota system as a means for Riyadh to influence Muslims around the world. Rasheed said that the Saudis have historically used the Hajj "as a political tool" after it took control of the two holy sites in the early 1920s.

"Access to the Hajj and performing the ritual is dependent on the will of the Saudi regime," she said. "The main reason is so it is able to control Muslim countries because the Hajj is one of the pillars of Islam, and every Muslim is under the obligation to do it if they can.

"If a Muslim is anti-Saudi or voices criticism of Saudi then they are banned from coming. We saw this happen with Rachid Ghannouchi, the leader of Ennahda [a political party] in Tunisia, when he tried to do the Umrah [attend Mecca outside Hajj] from London, the Iranians last year, and the Qataris this year."

Iranian pilgrims were told by their government not to attend the Hajj in 2016, the first time it has done so, after pre-existing tensions worsened between Tehran and Riyadh. Diplomatic relations hit an all-time low after more than 450 Iranian pilgrims were killed during the 2015 disaster.

Mehdi Beyad, a PhD candidate at SOAS in London who focuses on the geopolitics of the Middle East, told MEE that Tehran had politicised this incident and had historically used the Hajj as a "marker for broader political conflicts".

Just as you cannot divorce Saudi politics from its approach towards Hajj, the same goes for Iran

"Just as you cannot divorce Saudi politics from its approach towards Hajj, the same goes for Iran, for instance with the 1987 incident where Shia pilgrims were killed in clashes with Saudi security forces," said Beyad.

At least 400 people were killed by Saudi riot police after Iranian pilgrims chanted "Death to America! Death to the Soviet Union! Death to Israel!" next to the Grand Mosque in Mecca.

Beyad said: "This incident is seen as a rallying cry for Iranians and Shias more widely, and the competing narratives over it illustrate the broader way in which Hajj has become an arena where states battle for legitimacy and try to connect their identities to it.

"Beyond stated security concerns, by appearing to take a stand over Hajj different states can project themselves as protectors of their professed communities, call into question the capabilities and legitimacy of others, and use Hajj as a marker for broader political conflicts."

For Mahmud, the politics behind the award of a visa has left him frustrated and resentful.

"Each year the Hajj keeps getting more expensive, and I don't know how long I will have," he said. "These restrictions are making hard-working people like me and others lie to complete my God-given right to visit the Masjid al-Haram and the Prophet's mosque.

"What would Allah say to this?" 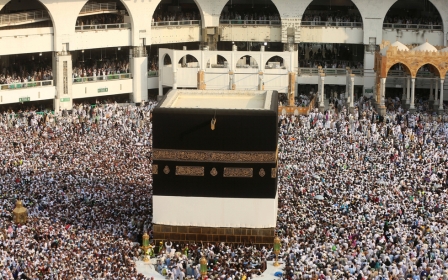 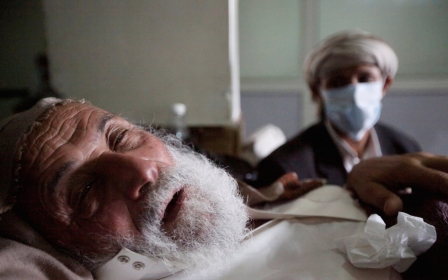 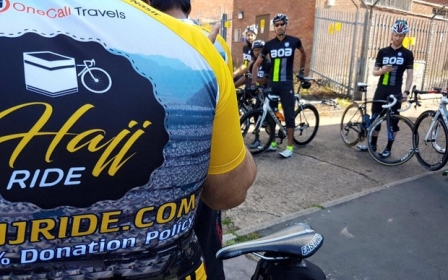