'He died for a cause': Safaa al-Saray has become the face of an uprising

Friends and family of the activist, killed by a tear gas canister, tell MEE he has become an icon of the revolution 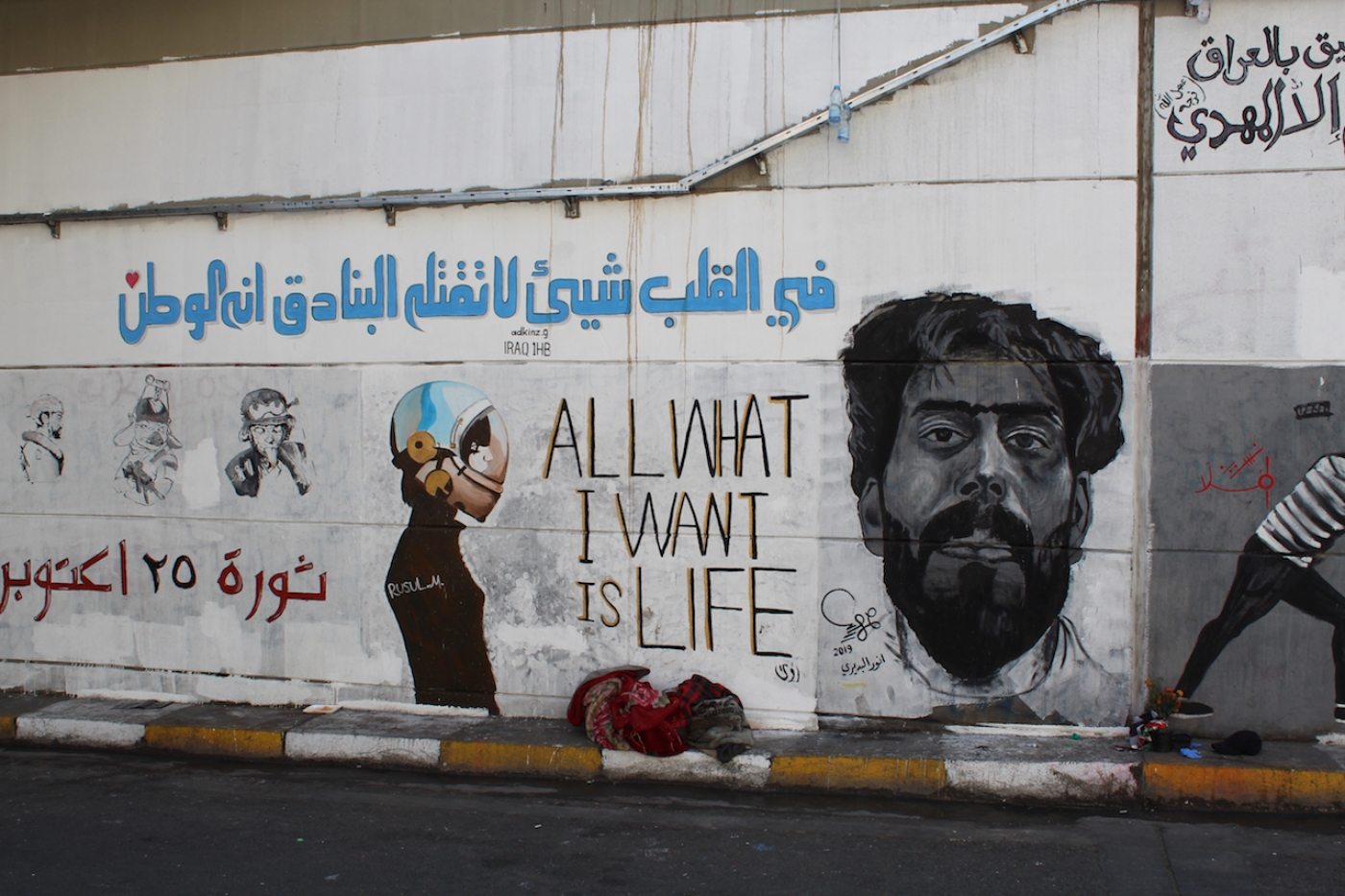 The faces of Iraq's dead cover the walls and makeshift stalls of Baghdad's Tahrir Square. Memorials for those killed by security forces, who have violently cracked down on the Iraq's uprising since it erupted in early October, the images are growing in number as the death toll steadily increases.

More than 300 protesters are thought to have been killed so far. But one face, in particular, has become ubiquitous and is plastered across banners and paintings throughout the activist-controlled district.

Safaa al-Saray was a social media activist with a multitude of followers on Instagram and Facebook. He had been active in Iraq’s anti-corruption movement since 2011, and was one of the ongoing anti-government uprising's earliest participants.

Saray quickly became highly influential, particularly by filming and posting footage of police brutality at a time when Iraq's mainstream media was noticeably absent from the protests.

"The media here were having problems covering it, so we volunteered to use our phones and deliver footage free of charge to the TV channels", said Ali Khrypt, a friend of Saray's. "We visited hospitals, we documented everything. I still can't believe he's gone."

On 28 October, the 26-year old Saray was struck on his head by a tear gas canister as he participated in demonstrations in Baghdad. He died from his injuries in hospital two hours later.

One of the last photos he posted on Facebook - a day before his untimely death - showed him leaning against a tree in the park area of Tahrir Square, just behind the concrete Nasb al-Hurriyah monument depicting Iraq's ancient history.

Since his death, the image has provided inspiration for activists and artists across Baghdad.

The walls of the main underpass leading beneath Tahrir Square have been transformed by artists, with murals voicing their outrage at the government, the international community, Iran and the United Nations. Saray’s face is a repeated motif.

Saray had no wife or children, while his mother - with whom he would sometimes go out protesting with - recently died of cancer. He left behind four sisters and five brothers.

One of Saray’s older brothers, Aqeel, said he was happy about his younger brother’s rebirth as a symbol.

“A cause and a revolution needs blood to water it. And we have the honour that our son was among the blood shed for the revolution.”

'Mercy on his soul'

Although the 2019 protests against corruption are unprecedented in terms of scale, they are far from the first demonstrations of their kind.

The rampant disfunction of the Iraqi state has long been a source of outrage for millions of Iraqis, even if the threat of terrorism had for a long time kept many off the street. Major demonstrations took place in Baghdad, particularly in 2016, against corruption.

Although originally launched by secular civil society activists, those protests eventually became identified with the influential Shia cleric Muqtada al-Sadr, whose followers came to dominate the demonstrations - at one point even storming the Iraqi parliament and prime minister’s office.

From Iraq to Chile, the people are rising up against neoliberalism
Oscar Rickett
Read More »

Like now, security forces and militias violently attempted to quell the protests. According to Khrypt, he and Saray were quickly identified as troublemakers.

“We have been targeted since 2016. When they saw us coming to protests, they would kidnap us, keep us in a car, they’d beat us up and then keep us until the protest was over, before releasing us,” he said.

“They know us because we’re active in the media.”

Today things are little different, with Khrypt receiving threats ahead of a massive protest on 25 October, when demonstrations restarted after a short pause for the Arbaeen religious holiday.

“Before the 25th, they called me, they threatened me. Relatives who know me passed the message that I had been threatened. Also some friends who were arrested were told that I was under threat,” he said.

Saadoun Street, which leads up to Tahrir Square - and is usually bustling with traffic - is now cut off by concrete roadblocks and dotted by tents set up by activists to help campaigners and volunteer medics.

On Monday, a group of students - former colleagues of Saray’s from al-Mustansiriya University - held a demonstration down Saadoun Street ending at a tent that has become a permanent tribute to the slain activist.

A number of activists wore T-shirts emblazoned with Saray’s face, while a banner hanging outside the tent was a banner with one of his Facebook posts from mid-June, reading: "The greatest honour and magnificence in this life is to be Iraqi."

Just outside, an old woman sat on the street distributing water to protesters en route to the protest camp at Tahrir Square.

“I brought this water to honour Safaa. I’m very poor, living on the street and Safaa used to give me charity,” she said.

“I also light candles for him. Mercy on his soul.”

Mahmoud Karim, a childhood friend, said that although Saray had been poor, he came every day to the protest camp.

“Since 2011, he was going out protesting and he was chased, arrested a few times, he had to flee the country twice - so when he died, the government was happy.”

Another supporter of Saray’s at the camp, who said he followed him on social media, said Saray had always urged for “peaceful protests”.

“Peoples’ rights are taken - he always urged them to take them back.”

The deaths of so many young protesters was one of the topics addressed at the Universal Periodic Review (UPR) meeting of the UN Human Rights Council on Monday.

Human Rights Watch called on the council to address the killings, as well as the repeated throttling of internet access, which they said was an attempt by the government to “prevent Iraqis and the world from seeing the extent of its deadly response” to the protests.

There has been anger among some activists at what they see as equivocation on the part of the UN, giving too much support for the government’s perspective.

A statement by the Special Representative for Iraq of the United Nations Secretary-General, Jeanine Hennis-Plasschaert, in which she said “disruption of critical infrastructure” was a “grave concern” which “undermines fulfilling protesters' legitimate demands” provoked particular fury among some campaigners.

“I demand, in the name of all protesters, to keep away Jeanine Plasschaert,” said Aqeel.

“Her position is siding with the authorities here… we don’t trust her. We request the UN immediately and quickly intervene to take a position to take measures to save the reputation of the United Nations - Jeanine Plasschaert has to be removed from Iraq.”

In response to the backlash, Plasschaert released a statement saying that the UN was a “partner for each and every Iraqi seeking change.”

Other documents released by the UN have addressed the use of violence by the Iraqi government, but for some it appears the damage in trust has been done.

“I just want them to take their role - they all have documents and they have seen the systemised deliberate killing, they have videos and they have photos. They just have to do their job,” said Aqeel.

'Living on a bomb'

On Monday, Plasschaert met with Ali al-Sistani, the most influential Shia cleric in Iraq, who has defended the protests as “legitimate” and called for government “restraint” in handling them.

She said the cleric had expressed to her that Iraq’s political forces were “not serious enough” to carry out the reforms called for by the UN, including urgent changes to the electoral system within two weeks, prosecution of those responsible for violence, prosecution of corrupt officials, and the passing of anti-corruption laws.

With little optimism on display about the ability of the current government to deliver on much-demanded reforms, protesters like Ali are digging in for the long haul.

"We protest because living in Iraq is like living on a bomb: hunger, explosions, militias, threats and all the wealth being looted and going in the pockets of people who didn’t even go to school, who have no education,” he said.

He said that, no matter what force the government used against them, they would maintain their position as long as they could.

“Safaa was the last person to leave Tahrir Square before Arbaeen - and this time we will also be the last who will leave this place.”